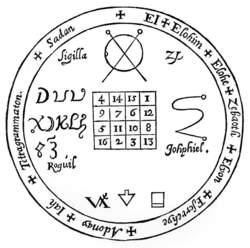 An arrangement of numbers in the form of a square so that every row and column, plus both diagonals, will add up to the same number. This number is called the constant. Each number may only appear once in the square. Magic squares have been known and used from ancient times, engraved on metal talismans and drawn on parchment ones. Used in ancient India and China, they were introduced into Europe early in the Christian era and have been found in many of the grimoires of Ceremonial Magic.

Heinrich Cornelius Agrippa von Nettesheim (1486-1535), best known simply as Cornelius Agrippa, founded several secret magical societies and wrote a number of books on magic. His best known work was De Occulta Philosophia (1531). He constructed seven different magic squares that he aligned with the seven planets: Saturn, Jupiter, Mars, Sun, Venus, Mercury, and Moon. These have become standards in ritual magic. The Saturn square is probably one of the oldest, being found in the Chinese I-Ching. Its constant is 15.

Francis Barrett in his The Magus (1801), Eliphas Levi in Transcendental Magic (1896), and others followed the lead of Agrippa, employing magic squares for a variety of purposes from protection in childbirth to making a man powerful. In 1932, S. L. MacGregor-Mathers published a translation of The Book of Sacred Magic of Abra-Melin, the Mage, purported to be the manuscript of a fifteenth-century grimoire. Much of the book is made up of magic squares for many different purposes, but the majority are comprised of letters rather than numbers. These are arranged so that the words read the same from the left, right, downward, and upward. One of these, known as the Sator formula, from the first word across the top of the square, was discovered engraved on old drinking vessels and on fragments from a Roman villa near Cirencester, England. It was believed that a witch could not stay in the same room as a talisman engraved with the Sator square.

Great care had to be exercised when constructing magic squares. When drawn on parchment, the squares should be marked in black ink with the numbers or letters in red ink. All should be drawn with the parchment set up so that the maker's shadow does not fall on the parchment. The red lines should not touch the black anywhere. As with all magical items, it should be appropriately consecrated before use.

Feedback
Flashcards & Bookmarks ?
Please log in or register to use Flashcards and Bookmarks. You can also log in with
Flashcards ?
My bookmarks ?
+ Add current page to bookmarks
Mentioned in ?
References in periodicals archive ?
This becomes a word magic square of pandiagonal type.
Most-perfect word magic
The 3-by-3 magic square with smallest sum (45) is given at the left below.
Magic square logology
Here are some other groups of nine numbers that your students could try to place in 3 x 3 magic squares.
Magic squares
Mathematicians in all parts of the world have studied magic squares and their special properties.
Multicultural Math Games from ancient history to the present
This method for constructing odd-order magic squares may seem simple, but it was only discovered around the beginning of the eleventh century c.e.
Math and magic: a block-printed wafq amulet from the beinecke library at Yale
The difference between ordinary magic square and SMS is that the elements of SMS are of the form: S(1), S(2), S(3), ..., S([n.sup.2]).
Smarandache magic square
Weinberger's Franklin, on the other hand, is in it for the pleasure of playing "the grand game of modernity." As with chess, or with the construction of arithmetical magic squares and circles, or with charming and disarming conversation, he is good at it.
Correction
In many magic squares, the diagonals also equal the rows and columns.
Holiday Fun
"Paul Klee's Magic Squares" (page 36) acquaints elementary students to this intriguing artist, helps them identify primary, secondary, warm, cool and neutral colors, as well as color value, hue and intensity.
Editor's note
This square is a variation of magic squares called "Most Perfect" by England's Kathleen Ollerenshaw (1912=2014).
A PERFECT MAGIC SQUARE
Geometric Magic Squares: A Challenging New Twist Using Colored Shapes Instead of Numbers
Geometric Magic Squares: A Challenging New Twist Using Colored Shapes Instead of Numbers