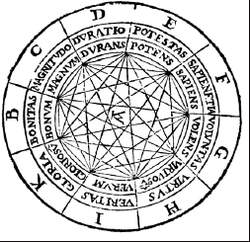 The alphabetic system of Roman Lull’s magical figure. The central “A” represents the Trinity, the nine divisions of the outer circle, the Absoluta (first) and the Releta (second). Reproduced by permission of Fortean Picture Library.

Magic is the art of controlling events by occult (hidden) means. Astrology is not, in the proper sense of the term, magical, but such techniques as electional astrology—determining the best times to perform certain actions—border on magic. Traditional Western magic views astrology as providing insight into the occult forces that are playing on Earth at any given time, and a specialized form of electional astrology is utilized by magicians to determine the best times for performing particular rituals.

Much of the astrological lore associated with magic is focused on the days of the week, the planetary hours, and the gems and metals connected with the planets. Each of the traditional seven planets—the Sun, the Moon, Mars, Mercury, Jupiter, Venus, and Saturn—rules, in sequence, the seven days of the week. A similar relationship exists between the planets and the hours of the day. Magicians utilize these relationships and other traditional associations with the planets by, for example, performing rituals to gain love on Friday (“Venusday”) during an hour ruled by Venus (the planet of love), performing rituals to gain money on Thursday (“Jupiterday”) during an hour ruled by Jupiter (the planet of wealth), and so forth.

Magicians who are competent astrologers also pay attention to the sign in which the relevant planet is placed, as well as the aspects the planet is making at the time of the ceremony. Thus, to once again take Venus as an example, a magician would wait until Venus was in a favorable sign (which, for Venus, would be Libra, Taurus, or Pisces) and favorably aspected (making harmonious aspects with other planets) before performing a love ritual or constructing a love amulet.

Feedback
Flashcards & Bookmarks ?
Please log in or register to use Flashcards and Bookmarks. You can also log in with
Flashcards ?
My bookmarks ?
+ Add current page to bookmarks
References in periodicals archive ?
"Pico on Magic and Astrology." Pico della Mirandola: New Essays.
Pico and the historiography of Renaissance astrology
Rabin offers a lucid exposition of Pico's knowledge of magic and astrology. She asserts the "strong effect on Renaissance natural philosophy" (178) of Pico's positive and negative attitudes towards magic and astrology in the Disputation against Divinatory Astrology: his integration of Kabbalah into the study of nature and the influence of his criticism of astrology on the later study of astronomy.
Pico della Mirandola: New Essays
Theodor Zwinger's Theatrum vitae humanae was the turning point, as it compiled contradictory information about Zoroaster as Persia n, as king of the Bactrians, and as magician or inventor of magic and astrology. Zwinger also recorded the divergent accounts of this figure's historical identity -- all without any attempt at coherence.
Faszination Zarathustra: Zoroaster und die Europaische Religionsgeschichte der Fruhen Neuzeit
Keith Thomas's discussion of both topics followed from his assumption that both magic and astrology were thrown onto the defensive by reformed Christianity and would eventually fall into disrepute as a result of the Protestant assault upon them.
The Devil's Dominion: Magic and Religion in Early New England
Encyclopedia browser ?
Full browser ?
CITE
Site: Follow: Share:
Open / Close