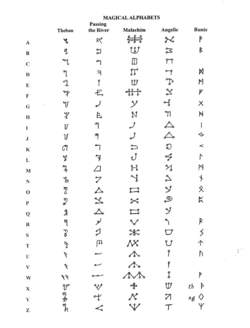 There are two main reasons for using magical alphabets: secrecy and power. In the Middle Ages, at a time when the Christian Church was mercilessly persecuting people for being witches, many high dignitaries of the Church were practicing Ceremonial Magic. Since it was a practice, not a religion, it was not viewed as counter to the teachings of the Church and so was allowed.

Each magician usually worked alone and jealously guarded his methods of operation, since there was great rivalry between them. To safeguard his work, a magician would write the most important parts of his grimoire in a secret, or "magical," alphabet. This way, if it was stolen, the thief would not necessarily be able to perform the work it had taken so long to perfect. Various magical alphabets were used, with such titles as Passing the River, Angelic, Writing of the Magi, Malachim, Enochi-

an, Ogham, and Theban. Various runic alphabets were also employed, as were Egyptian hieroglyphs.

The second reason for using the magical alphabets—power—was perhaps the more important. When doing ordinary, everyday writing, it is easy to scribble down what is to be recorded without really thinking about the actual writing itself—the formation of the letters. But if using an unfamiliar alphabet, one has to concentrate on the actual forming of every letter. In this way the writer is, according to magicians, putting his or her energies or "power" into that writing. This was important in the writing used on such things as talismans. The more power that went into the making of a talisman, the better. So magical alphabets were used both for secrecy and for directing energy into what was being written.

Modern day magicians and Witches still use some of the magical alphabets. However, some have forgotten or are ignorant of the original reasons for using them and display their proficiency with, for example, Theban, by writing it as rapidly as everyday English. This, of course, defeats the purpose of using it.

Feedback
Flashcards & Bookmarks ?
Please log in or register to use Flashcards and Bookmarks. You can also log in with
Flashcards ?
My bookmarks ?
+ Add current page to bookmarks
Mentioned in ?
References in periodicals archive ?
As Nigel Pennick asserted in his discussion of the Old English runic alphabet, "[e]ven in their most developed form, many of the runes have a pictographic nature" (Magical Alphabets 78).
BACK TO THE BEGINNING: RUDYARD KIPLING'S STORY OF THE INVENTION OF WRITING
On this prestigious occasion, Shemaroo also launched 'Tina & the Magical Alphabets '- an animated learning series at the Reliance TimeOut store, Cunningham Road.
Hiren Gada, Director, Shemaroo Entertainment said, "Yoga Kids DVDsand "Tina and the Magical Alphabets DVDs" are all designed keeping in mind that the fun element should always remain an important part of Kids' learning.
Tina and the Magical Alphabets - 3 DVD gift pack is economically priced at Rs.
Shemaroo Entertainment & Reliance TimeOut Brings Home 'The Fun Learning for Children' on DVDs