[mag′ned·ik ′am·plə‚fī·ər]
(electronics)
A device that employs saturable reactors to modulate the flow of alternating-current electric power to a load in response to a lower-energy-level direct-current input signal. Abbreviated magamp. Also known as transductor.
McGraw-Hill Dictionary of Scientific & Technical Terms, 6E, Copyright © 2003 by The McGraw-Hill Companies, Inc.
The following article is from The Great Soviet Encyclopedia (1979). It might be outdated or ideologically biased.

an amplifier for electrical signals based on the use of the nonlinear relationship inherent in ferromagnetic materials between the magnetic induction B and the magnetic field intensity H. The control elements in magnetic amplifiers are inductance coils with ferromagnetic cores in which two variable magnetic fields are acting; one varies at the frequency of the power supply, and the other at the frequency of the signal being amplified.

The simplest magnetic amplifier consists of two closed magnetic cores with windings W1 that are connected in series and are supplied from a source of alternating voltage ~ U (see Figure 1). The secondary windings W2 are connected in series and opposite to each other, so that closing windings W2 through a small resistance does not result in any change of the current strength i1 in the primary windings. If direct current is passed through windings W2., then, because of the nonlinear nature of the magnetization curve for the cores, the dynamic magnetic permeability and, correspondingly, the inductance L1 of the primary windings are reduced, thereby increasing the current in them. An arrangement such as that shown in Figure 1 (without the load resistance RL) is called a controlled choke coil, which becomes an amplifier if RL is connected in series with its wind- 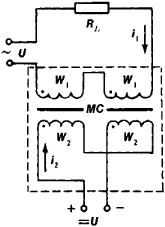 ings W1 and if a signal current i2 that is direct or alternates slowly (compared with the rate of change of the power-supply voltage ~U), rather than direct current, is fed to winding W2.

A magnetic amplifier differs basically from vacuum-tube and transistor amplifiers in that the control signal varies the inductance L1, which is in series with the load RL, rather than the internal resistance of a tube or transistor, thus causing the load current to vary. It is essentially a modulator in which a higher-frequency load current is amplitude-modulated by the low-frequency amplified signal. To produce a signal at the output of a magnetic amplifier that has the same shape as the amplified signal, a rectifier that acts as a detector is added in the load circuit.

where Ra is the effective resistance of windings W2, Δi1av is the increment in the load current corresponding to an increment in the signal current Δi2, and n1 and n2 are the number of turns in the primary and secondary windings, respectively. Magnetic amplifiers have relatively high inertia compared to vacuum-tube and transistor amplifiers, which is due mainly to the delay of the change in current i2 through the control winding with respect to the change in the voltage supplied to the input of the magnetic amplifier. Consequently, they are used primarily to amplify DC or slowly alternating signals. The inertia can be reduced (the speed of response may be increased) by introducing transient feedback, by increasing the number of amplifier stages, by connecting a differentiating circuit to the input, or by shunting the load with a capacitance. To extend the frequency range of the amplified oscillations toward the higher frequencies, the use of magnetic amplifiers in combination with vacuum-tube, transistor, and dynamoelectric amplifiers is desirable.

There are hundreds of versions of magnetic amplifier circuits and designs, with various types of load characteristics, feedback methods, numbers and shapes of cores, forms of amplified signals, biasing systems, and modes of operation. The choice of a type of magnetic amplifier depends on the gain requirements, the frequency of the amplified oscillations, and the area of use. Magnetic amplifiers have a wide range of uses, high-precision measuring instruments to automatic control devices for high-power production machines (rolling mills, excavators, and so on). The extensive use of such amplifiers results from their advantages: long service life, high reliability, simplicity of use, substantial amplification, low threshold of sensitivity for DC signals (10~-19-10-17 watt), wide range of power amplification (from 10-13-10-6 watt up to tens and even hundreds of kilowatts), constant operational readiness, the feasibility of summing several control signals at the input, substantial overload capability, fire and explosion safety, and the stability of their characteristics during operation.