In one of the common types of magnetic anisometer, a test specimen is placed in a strong magnetic field H (see Figure 1). 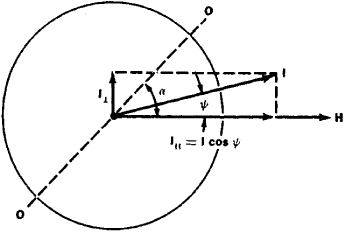 The specimen is magnetized in the direction of the field only if the field is in line with the axis of easy magnetization (the axis OO in Figure 1). For all other cases the magnetization vector I is in some intermediate position between the direction of H and the axis O O. It can be split into the components I⊥ and I⊥, longitudinal and transverse with respect to the field. The component I⊥ creates a torque M = I⊥ × H, which tends to turn the specimen just as the earth’s magnetic field rotates a magnetic needle that is placed in an east-west direction to a north-south position. The torque produced by the action of the magnetic field is balanced with the moment developed in elastic elements in the instrument [(2) in Figure 2]. The 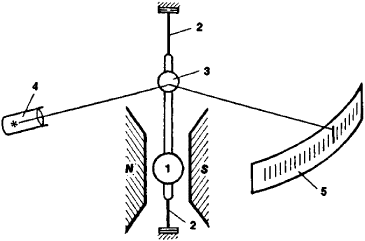 Figure 2. Diagram of a magnetic anisometer based on the measurement of the torque moment (designed by the Scientific Research Institute of Ferrous Metallurgy): (1) specimen; (2) elastic elements; (3) mirror; (4) light source; (5) scale. N and S are the poles of a magnet (the mass of the instrument’s magnetic part is 4.5 tons).

specimen’s angle of rotation is read from a scale. Measurements are made for various directions of the field H (by rotating a magnet the angle a is varied continuously from 0° to 180° or 360°). From the measurements it is possible to calculate the anisotropy constants and to evaluate the degree of textural development. The modern laboratory magnetic anisometer created in the Scientific Research Institute of Ferrous Metallurgy has a number of advantages compared with other similar instruments. It permits studies to be made both on massive specimens and on ferromagnetic films over a range of temperatures from 1300° K (1027° C) down to those of helium (∼ 1° K; ∼ −272° C) and in magnetic fields up to an intensity of 4,000 kiloamperes per m (50 kilooersteds).

There are a number of types of magnetic anisometers designed especially for measuring materials under production conditions without cutting out a specimen.