[mag′ned·ik ′bəb·əl]
(solid-state physics)
A cylindrical stable (nonvolatile) region of magnetization produced in a thin-film magnetic material by an external magnetic field; direction of magnetization is perpendicular to the plane of the material. Also known as bubble.
McGraw-Hill Dictionary of Scientific & Technical Terms, 6E, Copyright © 2003 by The McGraw-Hill Companies, Inc.
The following article is from The Great Soviet Encyclopedia (1979). It might be outdated or ideologically biased.

a tiny cylindrical magnetic domain in a ferromagnetic or ferrimagnetic material. Magnetic bubbles are isolated uniformly magnetized domains having the shape of circular cylinders and a direction of magnetization that is opposite to the direction of magnetization of the rest of the material (Figure 1). They were discovered in orthoferrites and hexaferrites in the late 1950’s. The proposal that magnetic bubbles be used in computer technology was first made in 1967.

Isolated magnetic bubbles exist over a specific range of bias fields; this range extends to several percent of the material’s saturation magnetization. The lower stability limit corresponds to the transformation of magnetic bubbles into domains with a different shape, while the upper limit corresponds to the collapse of the bubbles. The stability of magnetic bubbles results from a balance between the following three forces: the force of the interaction between the magnetization of the bubbles and the bias field; the force associated with the existence of bubble-domain walls, a 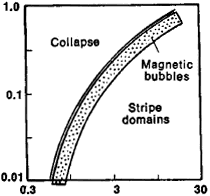 force that is analogous to surface tension; and the force of the interaction between the magnetization of the bubbles and the demagnetizing field of the rest of the magnetic material. The first two forces tend to shrink the magnetic bubbles, while the third tends to stretch them. At the moment of formation, the radius of a magnetic bubble is maximum. As the bias field is increased, the radius of the bubble decreases; at a certain critical field strength Hc, the compressive forces begin to exceed the tensile forces, and the bubble collapses (Figure 2). The actual dimensions of magnetic bubbles depend on the physical parameters of the material and the thickness of the film, in addition to the bias field. At the center of the region of stability, the diameter of a magnetic bubble is roughly equal to the thickness of the film.

In a uniform bias field, magnetic bubbles are stationary. In a spatially nonuniform field, the bubbles propagate into a region of lower field strength. The maximum velocity of magnetic bubbles ranges from 10 to 1,000 m/sec for various materials. The velocity is limited by energy transfer from moving bubbles to, for example, the crystal lattice or spin waves and by the interaction of the bubbles with crystal defects (the velocity increases as the number of defects decreases). Magnetic bubbles may be observed visually through a microscope in polarized light by means of the Faraday effect.

Thin epitaxial rare-earth ferrimagnetic-garnet films and amorphous films made from d- or f -metal alloys are now being used in digital-computer memories for the recording, storage, and reading of information in the binary number system. The digits 0 and 1 of the binary code are represented by the presence or absence, respectively, of magnetic bubbles at a given location in the film. Magnetic films exist in which the diameter of a magnetic bubble is less than 0.5 μm. In principle, such films make it possible to record information with a density of greater than 107bits/cm2. 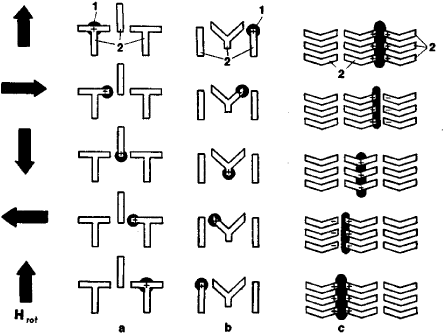 Figure 3. Schematic representation of the propagation of magnetic bubbles (1) over Permalloy elements (2): (a) T and I elements, (b) Y and I elements, (c) chevron elements; (Hrot) rotating in-plane magnetic field

A read/write system that has actually been implemented is based on the propagation of magnetic bubbles in magnetic films with the aid of thin (0.3–1 μ.m) T-and l-shaped, Y-and l-shaped, and chevron-shaped elements made of a soft-magnetic material, such as a Permalloy, and deposited directly on the film containing the bubbles. The elements are magnetized by a rotating in-plane magnetic field Hrot (Figure 3) in such a way that the field gradient that causes the bubbles to propagate is produced in the required direction. Devices for controlling the propagation of magnetic bubbles with the aid of Permalloy elements operate at rotating-field frequencies of approximately 1 megahertz, which corresponds to a recording or reading rate of about 1 megabit/sec. Information is recorded by means of magnetic-bubble generators, which operate on the basis of local magnetic reversal in the material by the pulsed magnetic field of a current passed through a pin-shaped conductor. A possible arrangement for the generation and propagation of magnetic bubbles is shown in Figure 4. 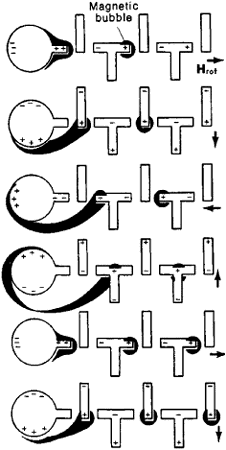 Figure 4. Schematic representation of bubble generation and propagation: (Hrot,) rotating inplane magnetic field; the bubble generator is on the left. As the in-plane field rotates, one of the ends of a generated bubble domain is gradually drawn into the propagation path, an isolated bubble is formed, and the bubble propagates along the path under the influence of the field of the magnetized elements.

Detectors that operate on the basis of magnetoresistance are used to read information in bubble memories. A magnetoresistive bubble detector is a specially shaped deposited patch of conducting material, such as a Permalloy, whose resistance depends on the magnetic field to which it is exposed. When a magnetic bubble propagates past such a detector, the magnetic field of the bubble changes the resistance of the detector. The change in resistance may be detected on the basis of a change in the voltage drop across the detector.

Bubble memories are highly reliable and are characterized by a low cost per bit. The use of magnetic bubbles is a possible route for the further development of electronic computers.

Feedback
Flashcards & Bookmarks ?
Please log in or register to use Flashcards and Bookmarks. You can also log in with
Flashcards ?
My bookmarks ?
+ Add current page to bookmarks
Mentioned in ?
References in periodicals archive ?
We may also define the size of the bubble in terms of the signal to noise ratio (SNR) of the system and defines the radius of the magnetic bubble as the distance where the received signal power is equal to the noise power ([P.sub.r] = N or SNR = 1).
Investigation of near field inductive communication system models, channels and experiments
Time sampling of Europa's auroral emissions measured by Hubble's imaging spectrograph enabled the researchers to distinguish between features created by charged particles from Jupiter's magnetic bubble and plumes from Europa's surface, and also to rule out more exotic explanations such as serendipitously observing a rare meteorite impact.
Evidence of Water Vapor Venting Off Jupiter Moon
Space weather begins to develop inside Earth's magnetosphere, the giant magnetic bubble that shields the planet from the supersonic flow of magnetized gas emitted by the sun.
Source of space weather near Earth discovered
(Santa Clara, CA) has signed a production agreement to fabricate bubble memory subsystems for the Army's AN/UGC-144 portable battlefield communication terminal built by Honeywell's Defense Communication Division This marks the first time a high-volume, off-the-shelf magnetic bubble system will be a component in a production model military computer.
The terabytes are coming ... storing and processing the data deluge
Now, a new study uses IBEX data and simulations of the interstellar boundary -- which lies at the very edge of the giant magnetic bubble surrounding our solar system called the heliosphere -- to better describe space in our galactic neighborhood.
NASA's IBEX observations pin down interstellar magnetic field
The material falls into the star-a process astronomers call accretion-but when it hits the magnetic bubble around it, called the magnetosphere, the material travels up and around the bubble, landing on the star from the top and bottom.
Hot Jupiter planets 'not regularly consumed by their stars'
IBEX uses energetic neutral atom imaging to examine how our heliosphere, the magnetic bubble in which our sun and planets reside, interacts with interstellar space.
IBEX sheds new light on Solar System boundary
After 35 years in space, NASA's long-distance interplanetary probe Voyager 1 finds itself on the cusp of leaving the Sun's magnetic bubble.
Voyager's on-ramp to interstellar space
Cluster previously detected current sheets on much larger scales of 100 km in the magnetosheath, the region sandwiched between Earth's magnetic bubble - the magnetosphere - and the bow shock that is created as it meets the solar wind.
Tiny turbulent swirls may heat up solar wind