a method for separating minerals from waste rock and undesirable impurities. The method is based on the action of a magnetic field on mineral particles with various levels of magnetic susceptibility.

The first magnetic separators date to the 18th century; the perfection and industrial use of the method date to 1892-1906 (in Sweden and in other countries). The first magnetic separator in Russia was built in 1911; series production of separators and the construction of magnetic concentration plants did not begin until the establishment of Soviet power. Concentration plants in the USSR treat about 500 million tons of mineral products annually by means of magnetic concentration (as of 1973).

“Reverse” magnetic concentration is also used; in this case the minerals of the magnetic fraction are undesirable impurities (for example, in repurification of tin, zirconium, lithium, beryllium, feldspar, and quartz concentrates).

A diagram of the magnetic concentration process is shown in Figure 1. In dry magnetic concentration, the ore is loaded onto the upper drums of a magnetic separator, which contain open permanent magnets that generate a field with an intensity of about 90 kiloamperes per meter (kA/m) on the surface of the drum. The magnetite ore is attracted to the poles (the surface of the drum), and the weakly magnetic fraction is removed and passes to the lower drums, which have a stronger field (110 kA/m), for repurification. Less magnetic pieces of ore from the tailings are extracted here.

In magnetic washing (wet concentration), finely ground magnetite ore mixed with water passes under the drums, which rotate opposite the flow of the slurry and extract from it any ferromagnetic materials. In washing manganese and other weakly magnetic ores the separators operate with a much stronger field (1,500 kA/m), which is generated in the gaps between the rolls and the poles by a closed electromagnetic system. Ore particles are extracted from the slurry by the rolls, which carry them to the concentrate compartment of the bath. The less magnetic fractions undergo repurification on the lower rolls.

The design and operational parameters of magnetic separators 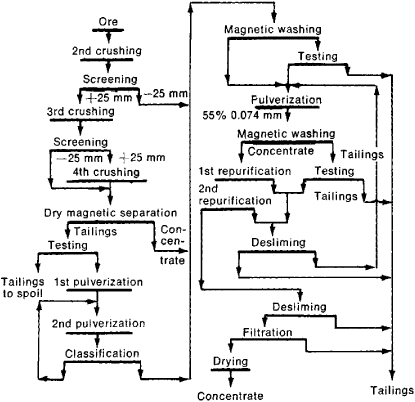 are determined by a large number of interconnected factors, such as the type of magnetic system; the number, shape, and location of the poles; the composition of magnetic materials; the diameter and speed of rotation of the rotors; the grain size of the ore; the content and dissemination of magnetic minerals; and, for wet processes, the quantity of water and type of bath.

As of 1971, a wide variety of magnetic separators, cones, iron separators, and magnetizing and demagnetizing equipment was manufactured in the USSR for dry concentration and washing of strongly magnetic ores (magnetic susceptibility, more than 3 ×10 -5), for recovery of suspended matter, and for concentration of weakly magnetic materials whose susceptibility barely exceeds 1.2 ×10-7 . Original designs have been developed for magnetic drum separators with electromagnetic systems and permanent magnets (for magnetite ores and suspensions) and for separators of the roll, rotor, and poly gradient drum-and-groove types (for weakly magnetic ores). Such equipment is used for production not only of ore concentrates but also of metallized concentrates. The output of concentrates of the latter type is now increasing markedly in connection with direct ore reduction methods, such as cokeless and powder metallurgy.

Feedback
Flashcards & Bookmarks ?
Please log in or register to use Flashcards and Bookmarks. You can also log in with
Flashcards ?
My bookmarks ?
+ Add current page to bookmarks
Mentioned in ?
References in periodicals archive ?
Another solution that has been studied is the dry magnetic concentration of iron ore based on the innovative technology developed by New Steel, a company acquired by Vale at the end of 2018 for R$ 1.9 billion (US$ 500 million).
Vale SA (BVMF: VALE3) - Vale to invest 11 billion reais in dry iron ore processing over the next five years -- 13/5/2019
Tailings were sampled in the processing, and then called flotation tailing, which was generated by hydro cyclones in the separation of minerals by flotation, and magnetic concentration tailings, which was obtained from the fall cone for magnetic concentration tailings.
The physical characterization of the mixture of iron ore tailings, called as 60f-40c mixture, composed of 60% iron ore tailings from the flotation process and 40% tailings from magnetic concentration, defined as optimal mixture, showed 100% passing the 2.0 mm sieve, 92.6% passing the 0.425 mm sieve and 40.8% passing the 0.075 mm sieve.
Geomechanical properties of mixtures of iron ore tailings improved with Portland cement
The recovered gravity concentrates, were dried and processed through high magnetic concentration method (Table 3).
Mineralogical and beneficiation studies of the Fe-Cu ores of Dammal Nisar, Chitral, NW Himalayas Pakistan
The successful rapid and analytically sensitive detection of target molecules (BNP, PSA, and EGFR) by magnetic collection of FF beads in the immunoreaction steps can be explained by the magnetic concentration of both antigens and antibodies locally on the plate or samples, followed by direct florescent measurement without the need for signal amplification.
Magnetically promoted rapid immunoreactions using functionalized fluorescent magnetic beads: a proof of principle
The reagent (MF-DEX-0060, MagQu) with desired magnetic concentration was obtained by diluting the highly concentrated magnetic fluid with pH-7.4 phosphate buffered saline (PBS) solution.
Time-evolution contrast of target MRI using high-stability antibody functionalized magnetic nanoparticles: an animal model
A sampling of topics: a case study of air quality in street canyons, effects of road traffic scenarios on human exposure to air pollution, application of mineral magnetic concentration measurements as a particle size proxy for urban road deposited sediments, multispectral gas detection method, indoor aerosol transport and deposition for various types of space heating, greenhouse gas intensities from the life cycle of conventional fuel and biofuels, and effects of flattening the stockpile crest and of the presence of buildings on dust emissions from industrial open storage systems.
Air pollution XVII; proceedings
the magnetic concentration of the large particle sizes, A and B, is up to 73 times that of the smaller sizes G and H (63-20 [micro]m).
The coarser size fractions ([is greater than] 3.36 mm to 250-500 [micro]m), separated by a magnet into grades of different magnetic concentrations, showed the same relationships between particle size and magnetic concentration and magnetic grain size as the finer fractions.
Application of mineral magnetism to describe profile development of toposequences of a sedimentary soil in south-eastern Australia
A deeper analysis, using sequences of magnetograms, reveals the influence of these vortices affecting the dynamics of magnetic concentrations. In particular we found rotation of magnetic features as if they were being dragged by the action of a vortex (see red lines in the upper row in Figure 4).
Influence of a plasma swirl motion on fine magnetic concentrations in the solar photosphere/Influencia del movimiento de vortices de plasma en concentraciones magneticas finas en la fotosfera solar
That's 100,000 times stronger than the Sun's polar magnetic field and 30 times greater even than sunspots, the strongest magnetic concentrations found on the Sun.
Stellar: magnetic fields weaken stars' inner sloshing
Currents on the open ocean, wells Below blank sand, magnetic concentrations Cloaked by ice, deep-space ionic winds: No where is empty, full with names For namelessness.
Words to God's Music: A New Book of Psalms