[mag′ned·ik ′kül·iŋ]
(cryogenics)
adiabatic demagnetization
McGraw-Hill Dictionary of Scientific & Technical Terms, 6E, Copyright © 2003 by The McGraw-Hill Companies, Inc.
The following article is from The Great Soviet Encyclopedia (1979). It might be outdated or ideologically biased.

a method of producing temperatures below 1°K by means of adiabatic demagnetization of paramag-nets. It was proposed by P. Debye and the American physicist W. Giauque (1926) and was first applied in 1933. Magnetic cooling is one of the two practically applicable methods that make possible the production of temperatures below 0.3°K (the other method is the dissolution of liquid 3He in liquid 4He).

Salts of rare earths (for example, gadolinium sulfate), as well as potassium chromate alum, ammonium ferric alum, chrome methyl ammonium alum, and a number of other paramagnetic substances, are used in magnetic cooling. The crystal lattice of these substances contains ions of iron, chromium, and gadolinium with incomplete electron shells and nonzero intrinsic magnetic moment (spin). In the crystal lattice the paramagnetic ions are separated by a large number of nonmagnetic atoms. Consequently, the magnetic interaction of ions is weak: even at low temperatures, when thermal motion is significantly reduced, the forces of interaction are not able to order the system of randomly oriented spins.

In the magnetic cooling method a sufficiently strong external magnetic field (of the order of several kilooersteds) is applied; as the field orders the spin directions, it magnetizes the paramagnet. If the external field is shut off (demagnetization of the paramagnet), the spins again assume random orientation under the influence of the thermal motion of the atoms (ions) in the crystal lattice. If the demagnetization occurs adiabatically (under conditions of thermal insulation) the temperature of the paramagnet decreases.

The magnetic cooling process is customarily represented in thermodynamic diagrams in coordinates of temperature T and entropy S (Figure 1). The production of low temperatures is associated with the attainment of states in which a substance exhibits low values of entropy. Both thermal vibrations of the atoms in the crystal lattice (“thermal disorder”) and disorientation of the spins (“magnetic disorder”) contribute to the entropy of the crystalline paramagnet, which characterizes the disorder of its structure. As T —> 0°, the entropy of the lattice Slat, diminishes faster than the entropy of the spin system Smag, so that at temperatures T < 1°K, siat becomes vanishingly small as compared with Smag. Under such conditions magnetic cooling becomes feasible. 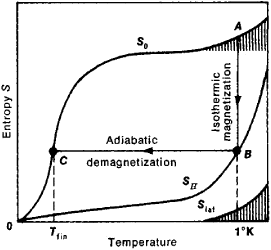 Considerably lower temperatures have been produced by using the paramagnetism of atomic nuclei rather than atoms (ions). The magnetic moments of nuclei are about a thousand times smaller than the spin magnetic moments of electrons, which determine the moments of paramagnetic ions. Therefore, the interaction of nuclear magnetic moments is much weaker than the interaction of ion moments. Even at T = 1°K, strong magnetic fields (~ 107 oersteds) are required to magnetize a system of nuclear magnetic moments to saturation. In practice, fields of 105 oersteds are used, but in this case lower temperatures are needed (~0.01°K). For an initial temperature of 0.01°K the use of adiabatic demagnetization of nuclear spin systems makes possible the production of temperatures from 10~5 to 10~6 °K. The entire sample is not cooled to this temperature. The temperature produced (called the spin temperature) is a measure of the intensity of thermal motion in the nuclear spin system immediately after demagnetization. However, after demagnetization the electrons and the crystal lattice remain at the original temperature ~0.01°K. The subsequent energy transfer between the systems of nuclear and electron spins (by means of spin-spin interaction) can result in the short-duration cooling of the entire substance down to T ~ 10-4 °K. Low temperatures (~ 10 ~2 °K and lower) are measured using methods of magnetic thermometry.

In practice, magnetic cooling is conducted as follows (Figure 2,a). A block of a paramagnetic salt is suspended in a chamber on brackets made from a material with a low coefficient of thermal conductivity. The chamber is immersed in a cryostat containing liquid 4He. By evacuating the helium vapors the temperature in the cryostat is maintained at 1.0°-1.2°K (the use of liquid 3He makes possible a decrease in the original temperature to Ü0.3°K). Heat released in the salt during magnetization is conducted to the liquid helium by the gas in the chamber. Before the magnetic field is cut off, the gas is pumped out of the chamber through a valve; thus, the block of salt is thermally insulated from the liquid helium. After demagnetization the temperature of salt drops and may attain several thousandths of a degree. If any substance is pressed into the block of salt or connected to it by a bundle of thin copper wires, the substance can be cooled to virtually the same temperature. 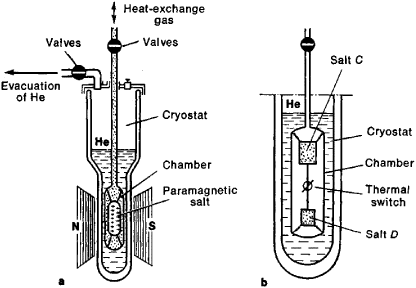 The lowest temperatures are produced by a two-stage method of magnetic cooling (Figure 2,b). First, salt C is adiabatically demagnetized, and a previously magnetized salt D is cooled through the thermal switch (thermally conductive jumper). Subsequently, after the switch is opened, salt D is demagnetized and is cooled to a temperature substantially lower than that previously obtained for the salt C. In apparatus of the type described here, the thermal switch usually consists of a small wire made of a superconductor. The thermal conductivity of such a switch in its superconductive state at T ~ 0.1 °K is many times greater than the thermal conductivity in its normal state. Nuclear demagnetization is also conducted according to the diagram shown in Figure 2,b. However, in this case the magnetized salt is replaced, for example, by a copper sample, and the field used to magnetize the sample has an intensity of several dozen kilooersteds.

Magnetic cooling is widely used in the study of the low-temperature properties of liquid helium (such as superfluidity), quantum phenomena in solids (for example, superconductivity), and phenomena of nuclear physics.

Feedback
Flashcards & Bookmarks ?
Please log in or register to use Flashcards and Bookmarks. You can also log in with
Flashcards ?
My bookmarks ?
+ Add current page to bookmarks
Mentioned in ?
References in periodicals archive ?
(2014) studied larger-scale rotary magnetic cooling systems providing 2 kW (6824.28 Btu/h) of cooling power over a 12 K (21.6[degrees]R) temperature span with COP values exceeding 2.0.
Analysis of Magnetic Refrigeration Designs with Three Different Magnet Array Geometries
Very first magnetic cooling system was developed by Brown in 1976 (Brown [6]).
Magnetic refrigeration - A new frontier in cooling technology
Adams, "Discoveries in superconductivity, persistent-switch magnets, and magnetic cooling", J.
Design and optimization of pulsed magnetic field generator for cell magneto-permeabilization
In 2014, Cooltech Applications was given a grant by the European Union through the CIP Eco-Innovation program to conduct the MagFreeG Project, a 30-month project aiming to commercialize and deploy magnetic cooling throughout Europe.
Smart Design at Chillventa
Thirty years of near room temperature magnetic cooling: Where we are today and future prospects, International Journal of Refrigeration 31: 945-961.
Enhancements of thermal performances of an active magnetic refrigeration device based on nanofluids
Therefore, these large values of the magnetic entropy change and RCP and the nontoxic and less-expensive constituent elements make this system a promising material for magnetic cooling applications.
Phase Transitions and Magnetocaloric Properties in Mn[Co.sub.1-x] [Zr.sub.x]Ge Compounds
For example, super paramagnetic nanoparticles may have many potential uses in frofluid, color imaging, magnetic cooling (quenching), detoxification of biological fluids, controlled delivery of anti-cancer medications, MRI and magnetic cell isolation.
The magnetic properties of nanocrystalline fesoniso alloys prepared by mechanical alloying method
We hope this will motivate new experiments." Li Shi, a professor of mechanical engineering at the University of Texas at Austin who was not involved in the research, says the magnetic cooling effect identified by the group is "a highly useful theoretical framework for studying the coupling between spin and heat, and can potentially stimulate ideas of utilizing magnons as a working 'fluid' in a solid-state refrigeration system." Liao points out that magnons also add to the arsenal of tools for improving existing thermoelectric generators -- which, while potentially innovative in their ability to generate electricity from heat, are also relatively inefficient.
Magnets May Act as Wireless Cooling Agents
Topics include a chiral model of graphene, spin-polarized current in magnetic nanowires, numerical simulation of magnetic cooling cycles, the effect of electron irradiation on lanthanum manganites, and MRI of malignant tumorigenesis.
Magnetism and magnetic materials V (MISM 2011); proceedings
Magnetic cooling technology currently used for eco-friendly refrigeration could soon provide an alternative to conventional gas-compression air conditioners.
There's no place like a green home
TURKISH SCIENTISTS' BREAKTHROUGH IN MAGNETIC COOLING
TURKEY-PRESS SCAN (1)