a rapid demagnetization process that reduces the magnetic excitation field in electrical machines to zero. It is often necessary under normal operating conditions but becomes particularly important in emergencies caused by insulation damage inside electrical machines or on their output terminals.

The simplest method of extinguishing a magnetic field is the disconnection of the field winding. However, the rapid disconnection of a high-inductance electrical circuit produces a high voltage across its terminals that is capable of breaking down the insulation. Therefore, during magnetic field extinction the field winding is connected either to a discharge resistance or to an opposing electromotive force.

The conditions for extinction are optimal when the duration of the process is the smallest and the voltage across the field winding does not exceed that permitted by the electric strength of the insulation. Shortening the duration of the extinction process reduces the possible damage resulting from an emergency. 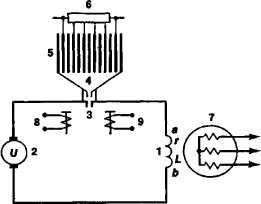 In the USSR automatic field dampers are used for magnetic field extinction in turbogenerators, hydraulic generators, synchronous phase modifiers, and large DC machines. The principal element of an automatic field damper is an arc-extinguishing grid. In case of a short circuit in the stator winding (see Figure 1), a signal goes to a triggering device, which opens the main contacts and then those of the arc extinguisher.

The resulting arc is drawn by a magnetic field into the grid, where it is broken up into a number of short arcs of constant length between the plates of the grid, which act as a unique nonlinear discharge resistance. As the current in the machine’s field winding decreases, the arc resistance shunting the winding increases, thus providing optimal conditions for magnetic field extinction. Automatic field dampers are used with ion and electromechanical excitation, as well as with ion self-excitation.