[mag′ned·ik ′hed]
(electronics)
The electromagnet used for reading, recording, or erasing signals on a magnetic disk, drum, or tape. Also known as magnetic read/write head.
McGraw-Hill Dictionary of Scientific & Technical Terms, 6E, Copyright © 2003 by The McGraw-Hill Companies, Inc.
The following article is from The Great Soviet Encyclopedia (1979). It might be outdated or ideologically biased.

the central element of a device used for the recording, erasing, and playback of information.

The major parts of the magnetic head are a core (a magnetic circuit) that concentrates a magnetic flux and one or more coils that deliver or collect electric signals. Cores are made of 79NM, 79NM-U, and SONKhS nickel-iron alloys, Iu-16 and Iu-16M aluminum alloys (Alfenol), ferrites, or Permalloy. On the side facing the recording medium, the core has a working gap, a space that is filled with a nonmagnetic material (for example, beryllium-bronze foil) and that provides a magnetic coupling between the magnetic head and the recording medium. Depending on the position of the working gap relative to the medium, it is possible to make magnetic recordings with longitudinal, transverse, or perpendicular magnetization. The core of the magnetic head either adjoins the medium (contact recording) or is separated from it by an air gap (contactless recording).

Figure 1 shows a diagram of the most common type of longitudinal-magnetization contact recording. When recording, electric signals supplied to the coil (5) induce a magnetic flux in 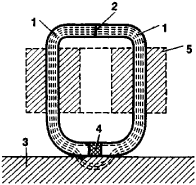 the core (1) that, penetrating a section of the magnetic surface of the moving recording medium (3) in the vicinity of the working gap (4), varies the residual magnetization of the section in conformity with the signal being recorded. In playback, an effective electromotive force (emf), or signal, arises as a result of the electromagnetic induction created by the relative movement between the magnetic head and the recording medium.

Feedback
Flashcards & Bookmarks ?
Please log in or register to use Flashcards and Bookmarks. You can also log in with
Flashcards ?
My bookmarks ?
+ Add current page to bookmarks
Mentioned in ?
References in periodicals archive ?
Blanco, "Dynamic behavior of magnetic head sliders and carbon wear in a rampload process," Microsystem Technologies, vol.
Mechanistic features of nanodiamonds in the lapping of magnetic heads
Using the 4 x 4 mm ASIC and a small form factor microprocessor, Semtek reduced the size of the MSR electronics from 2.25 [in.sup.2] to 0.25 [in.sup.2] "The size reduction made possible our new MICRO MSR where all the functions of an intelligent MSR are built into the magnetic head providing new levels of security impossible with the previous electronics," noted von Mueller.
Low-cost ASIC technology powers wireless credit card reader
The laser light source illuminates the embossed diskette through a hole in the magnetic head slider.
Flopticals - now and tomorrow
For systems that are designed to be in contact, three types of tribological failure have been observed: wear of the magnetic head which degrades the signal strength, clogging of the air gap in the head which also degrades the signal, and wear of the magnetic media which results in permanent loss of the data stored in the damaged portions of the media.
Tribology and mechanical systems
The magnetic separation equipment industry can provide magnetic head pulleys, suspended separators, magnetic drums and an eddy current system for non-ferrous metallic removal.
Steady diet: keeping a shredder evenly fed is among the priorities for productive auto shredder operators
OptiMag supplies automated optical defect inspection and process control equipment for the data storage thin film magnetic head industry.
Veeco to Buy Optimag
Products include stationary and self-cleaning overhead magnets, heavy media separators, drum separators, magnetic head pulleys, grate and plate magnets and magnetic sweepers.
Select construction, demolition & recycling associations
Sales: Thermo Optek's subsidiary, VG Semicon, received an order from Quantum Epitaxial Designs for one of the company's recently introduced V150 molecular-beam epitaxy systems, valued at approximately $4 million...Veeco Instruments announced that it has received orders from three US data storage companies for more than $12.5 million worth of etch and deposition equipment, predominantly its ion beam deposition and ion beam etching products for high density magnetoresistive and giant magnetoresistive thin film magnetic head applications...
Random Samples
* Magnetic head pulleys and other conveyor separators from Bunting Magnetics Co., Newton, Kan., are being marketed as a "first line of defense" against ferrous contaminants for wood recyclers.
Bunting targets wood recyclers
Another important aspect of OSD technology is the use of a Recessed Objective Lens (ROL), a lens that is recessed above the magnetic head. Because of the objective len's position, the lens will not be subjected to particulate contamination that may be introduced into the drive during insertion of the media.
Beyond Magneto Optics: OSD And The Future Of Optical Storage