Also found in: Dictionary, Thesaurus, Medical.
Related to Magnetic Variations: magnetic declination
The following article is from The Great Soviet Encyclopedia (1979). It might be outdated or ideologically biased.

continuous changes of the earth’s magnetic field with time. Magnetic variations are characterized by the deviation of the components of the geomagnetic field (the horizontal component H , the vertical component Z , and magnetic declination D) from the average values at the place of observation. In equatorial regions the average value of the total intensity of the earth’s magnetic field is 0.42 oersteds; it increases toward the poles and attains 0.70 oersteds. Instruments that measure the variations of H, Z , and D are called magnetic variometers. The magnitude and form of magnetic variations depends on the latitude of the place of observation, the time of year, and solar activity. Processing the results of measurements makes it possible to distinguish periodic and nonperiodic changes of cosmic, magnetospheric-ionospheric, and intraterrestrial origin in the geomagnetic field. (See Figure 1.) 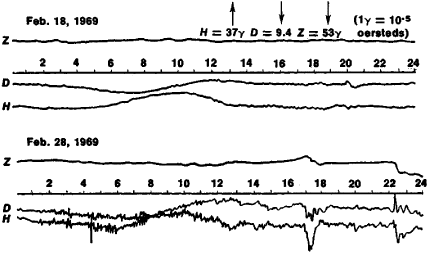 Figure 1. Photographic record of the components of the earth’s magnetic field (Voeikovo Observatory, February 1969); solar-dirurnal, short-period irregular, and bay-shaped (1700-1800 hrs) magnetic variations are superimposed on the diurnal course of the components H , D , and Z . The arrows indicate the scale and direction of the readings of H , D , Z.

Feedback
Flashcards & Bookmarks ?
Please log in or register to use Flashcards and Bookmarks. You can also log in with
Flashcards ?
My bookmarks ?
+ Add current page to bookmarks
Mentioned in ?
References in periodicals archive ?
In 1701 the Paramore surveyed the English Channel on a mission as much concerned with spying out French harbours as with measuring magnetic variations. Interestingly enough, it was impossible to find volunteers to crew the ship, suggesting that the misadventures of the earlier voyages were well known.
Edmond Halley - explorer
Being closer to the source also means stronger signals, which is more important in equatorial regions where diurnal magnetic variations (daily magnetic variations due to the sun) can be of the same magnitude as the crustal magnetic signal.
Micro-magnetic field measurements near the ocean floor
Researchers who learn to control the chaotic amplification of tiny fluctuations in the magnetic environment may find themselves able to sense extremely small magnetic variations in biological tissues and other samples.
Magnetic chorus plunges into chaos