The region surrounding a magnet, a conductor carrying an electric current, a stream of charged particles, etc., in which such a body or system exerts a detectable force. This force will be experienced by another magnetic substance or by a moving charged particle, such as an electron. The magnetic flux density is a measure of the strength of the field, usually quoted in teslas or sometimes in gauss. See also galactic magnetic field; geomagnetism; interplanetary medium; magnetic stars; sunspot cycle.
Collins Dictionary of Astronomy © Market House Books Ltd, 2006
The following article is from The Great Soviet Encyclopedia (1979). It might be outdated or ideologically biased.

The term “magnetic field” was introduced in 1845 by M. Faraday, who believed that both electrical and magnetic interactions are accomplished by means of a single material field. The classical theory of the electromagnetic field was developed by J. Maxwell in 1873, and quantum theory was devised in the 1920’s.

A variable magnetic field also arises when an electric field changes over time. In turn, an electric field arises when a magnetic field changes over time. Maxwell’s equations give a complete description of electric and magnetic fields in their interrelation. Lines of force of a field (lines of magnetic induction) are often introduced to characterize a magnetic field. The tangent at each point of such a line has the direction of the vector B at that point. The induction of the field is determined quantitatively by the number of lines of force that pass through a unit area perpendicular to them. The lines of induction converge at points where the values of B are high and diverge at points where the field is weaker (see, for example, Figure 1).

The following manifestations are most characteristic of a magnetic field.

(2) In a permanent uniform magnetic field the action of the Lorentz force leads to a situation in which the trajectory of an electric charge has the form of a spiral whose curvature is inversely proportional to velocity (Figure l,b). The curvature of the trajectory of electric charges under the action of the Lorentz force affects, for example, the distribution of current in a cross section of a conductor placed in a magnetic field. This effect underlies galvanomagnetic, thermomagnetic, and other related phenomena. 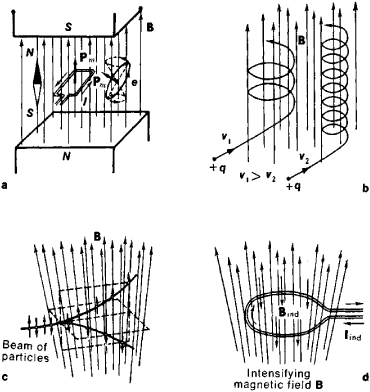 (4) A magnetic field that varies over time has a force effect on stationary electric charges and sets them in motion; the current Imd that arises in the circuit (Figure l,d) counteracts, with its own magnetic field Bind, the change in the original magnetic field.

The relation μ, = B/μ0H, which defines the magnetic properties of a substance, is called its magnetic permeability. Depending on the value of μ, substances are divided into diamagnets (μ < 1) and paramagnets (μ, > 1); substances with μ <<; 1 are called ferromagnets.

The volume density of the energy of a magnetic field in the absence of ferromagnets is wm = μH2/8π or wm = BH/8π (in cgs units); wm = μμ0H2/2 or BH/2 (in the International System of Units). In the general case wm = 1/2 f HdB, where the integration limits are determined by the initial and final values of the magnetic induction B, which is intricately dependent on the field H.

Various types of magnetometers are used to measure the characteristics of a magnetic field and the magnetic properties of substances. The gauss (G) is the unit of induction for a magnetic field in the cgs system, and the tesla (1 tesla = 104 G) is used in the International System of Units. The field intensity is measured in oersteds and amperes per meter (A/m), respectively, where 1 A/m = 4π/103 oersted ≈ 0.01256 oersted; the energy density of a magnetic field is measured in ergs/cm3 or joules per cu m (J/m3); 1 J/m3 = 10 ergs/cm3.

Occurrence. In nature, magnetic fields are extraordinarily diverse both in size and in the effects they produce. The magnetic field of the earth, which forms the earth’s magnetosphere, extends to a distance of 70,000-80,000 km in the direction of the

Direct measurements by means of spacecraft have demonstrated that the heavenly bodies closest to the earth—the moon and the planet Venus—do not have an intrinsic magnetic field similar to the earth’s. Of the other planets in the solar system, only Mercury, Mars, Saturn, and especially Jupiter have intrinsic magnetic fields sufficient to create planetary magnetic traps. A magnetic field of up to 10 G and a number of characteristic phenomena (such as magnetic storms and synchrotron radio-frequency radiation) that indicate the significant role of magnetic fields in planetary processes have been found on Jupiter. 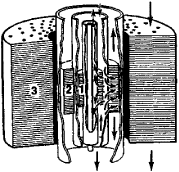 The role of magnetic fields is just as significant in phenomena of the microcosm as on a cosmic scale. This is because all particles that are structural components of matter (electrons, protons, and neutrons) have a magnetic moment, and also because of the action of magnetic fields on moving electric charges. If the total magnetic moment M of the particles that form an atom or molecule is equal to zero, then such atoms and molecules are called diamagnetic. Atoms, ions, or molecules with M ≠ 0 are said to be paramagnetic. When an external magnetic field is applied, an induced magnetic moment directed opposite to the magnetizing field arises in all atoms (both with M = 0 and M ≠ 0). However, in paramagnetic atoms in a magnetic field this effect is masked by the preferential rotation of their magnetic moments with the field. In paramagnets and ferromagnets, magnetization increases to saturation with the strength of the external magnetic field. The shape of the magnetization curves of ferromagnets and antiferromagnets is determined largely by the magnetic interaction of the atomic carriers of magnetism. This interaction also is responsible for the great diversity of the types of atomic magnetic structure in ferrimagnets (ferrites).

Another important physical phenomenon—the resonance absorption of radio waves by matter (the phenomenon of magnetic resonance)—is related to the appearance of Zeeman energy sub-levels in a magnetic field and to the quantum transitions between them. The dependence of the position and shape of magnetic resonance spectral lines on the peculiarities of the interaction of molecules, atoms, and ions—and also of nuclei in liquids and solids—makes possible the study of the structure of liquids, crystals, and complex molecules and the kinetics of chemical and biochemical reactions by using electron paramagnetic resonance (EPR) and nuclear magnetic resonance (NMR). 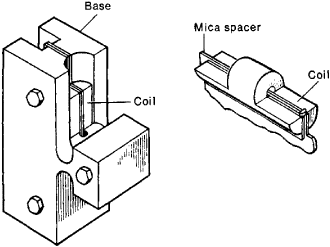 Figure 4. Model of a pulsed single-coil solenoid (length, 10 mm; diameter of opening, 2 mm). The power source is a battery of 2.4-kJ capacitors. The fields produced are up to 1.6 MG.

Magnetic fields of up to about 500 kG are used extensively for scientific and applied purposes: in solid-state physics they are used to study the energy spectra of electrons in metals, semiconductors, and superconductors; to study ferromagnetism and antiferromagnetism; to confine plasma in magnetohydrodynamic generators and motors; to produce superlow temperatures; and to focus electron beams in electron microscopes. Superconducting solenoids (up to 150-200 kG; Figure 2), water-cooled solenoids (up to 250 kG; Figure 3), and pulsed solenoids (up to 1.6 MG; Figure 4) are used to produce strong magnetic fields. The forces acting on conductors carrying a current in strong magnetic fields may be very great (for example, in fields of the order of 250 kG the mechanical stresses reach 4 ×108 N/m2—that is, the ultimate strength of copper). The pressure effect of magnetic fields is taken into account in the design of electromagnets and solenoids and is used to stamp products from metal. The maximum value of a field that can be produced without destroying the solenoid does not exceed 0.9 MG.

Superstrong magnetic fields are used to obtain data on the properties of substances in fields stronger than 1 MG and at the accompanying pressures of tens of millions of atmospheres. In particular, these studies make possible an understanding in greater depth of the processes that transpire in the interior of planets and stars. Superstrong magnetic fields are produced by the directed-explosion method (Figure 5). A copper pipe within which a strong pulsed magnetic field has been generated is radially 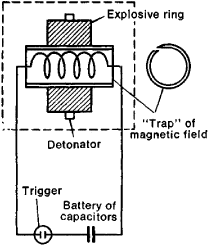 Figure 5. Magnetoexplosive generator. The primary pulsed field is generated by the discharge of a battery of capacitors. When the field reaches its maximum strength, an explosion takes place, leading to a sharp increase in the field in the copper pipe (the “trap” of the magnetic field). A trigger was used to synchronize the primary pulses magnetic field and the detonation of the explosive.

[mag′ned·ik ′fēld]
(electromagnetism)
One of the elementary fields in nature; it is found in the vicinity of a magnetic body or current-carrying medium and, along with electric field, in a light wave; charges moving through a magnetic field experience the Lorentz force.
magnetic field strength
McGraw-Hill Dictionary of Scientific & Technical Terms, 6E, Copyright © 2003 by The McGraw-Hill Companies, Inc.

A distribution of magnetic lines of force in space, such as those found in and about a magnet, an electric motor, or the earth.
An Illustrated Dictionary of Aviation Copyright © 2005 by The McGraw-Hill Companies, Inc. All rights reserved

An invisible energy emitted by a magnet. Same as flux.
Copyright © 1981-2019 by The Computer Language Company Inc. All Rights reserved. THIS DEFINITION IS FOR PERSONAL USE ONLY. All other reproduction is strictly prohibited without permission from the publisher.

Feedback
Flashcards & Bookmarks ?
Please log in or register to use Flashcards and Bookmarks. You can also log in with
Flashcards ?
My bookmarks ?
+ Add current page to bookmarks
Mentioned in ?
References in periodicals archive ?
Then, magnetic force field around the false part is computed, and the new external force field is generated.
In this paper, we proposed an improved method for GVF with the help of magnetic force field from magnetostatic ACM.
Improved algorithm for gradient vector flow based active contour model using global and local information