a device used to measure the magnetic field of the sun. The solar magnetograph was first used in 1952 by the American astronomer H. Babcock to record the line-of-sight component of the magnetic field; in subsequent years it was perfected in the USSR. 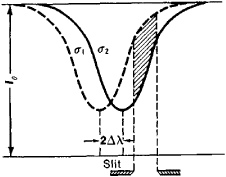 The main elements of a solar magnetograph are an electro-optical light modulator, a spectrograph, light detectors (photo-multipliers), and a recording unit. The method of measurement is based on the longitudinal Zeeman effect, as a result of which the spectral line is split into two σ components that are circularly polarized in opposite directions. The image of the sun is focused on the slit of the spectrograph, behind which an electrooptical crystal combined with a polarizer is mounted. Under the action of an alternating voltage, the device transmits the cr components, alternately shifting the line by the amount 2Δλ (see Figure 1). In the focal plane of the spectrograph, light from the wing of the line passes through an aperture and strikes the photomultiplier, which is connected to an amplifier whose varying signal is recorded. The cross-hatched area in Figure 1 is proportional to the change in the intensity of the light passing through the slit during alternate passage of the polarized components <TI and cr2 of the line. For small splittings of the line, the signal of the solar magnetograph is proportional to the intensity of the line-of-sight field.

A solar magnetograph design using the transverse Zeeman effect to measure the two components of the magnetic fieldperpendicular to the line of sight was developed by the Soviet astronomers A. B. Severnyi and V. E. Stepanov in 1959. In this design, a quarter-wave plate that converts linear polarization of light into circular polarization is placed in front of the spectrograph slit. There is a solar magnetograph design—the solar vector magnetograph—which can measure all the field components simultaneously. Solar magnetographs are usually equipped with a device to compile charts of the sun’s magnetic field and the brightness and rate of motion of matter in certain sectors or over the entire surface of the sun. The sensitivity of current solar magnetographs is 0.3-1 gauss for the line-of-sight magnetic field and 50-100 gauss for the perpendicular field.