[mag¦nēd·ō‚hī·drə·dī′nām·ik ′jen·ə‚rād·ər]
(electricity)
A system for generating electric power in which the kinetic energy of a flowing conducting fluid is converted to electric energy by a magnetohydrodynamic interaction. Abbreviated MHD generator.
McGraw-Hill Dictionary of Scientific & Technical Terms, 6E, Copyright © 2003 by The McGraw-Hill Companies, Inc.
The following article is from The Great Soviet Encyclopedia (1979). It might be outdated or ideologically biased.

(MHD generator), a power generator in which the energy of the working fluid (a conductive liquid or gaseous medium) moving through a magnetic field is converted directly into electric power. The term “magnetohydrodynamic generator” is derived from the fact that the motion of such mediums is described by magnetohydrodynamics.

Direct conversion of energy is an outstanding characteristic of MHD generators, distinguishing them from electromechanical generators. In both kinds of generators the generation of electric current is based on the phenomenon of electromagnetic induction—that is, on the generation of a current in a conductor that crosses the lines of force of a magnetic field. The distinguishing feature of an MHD generator is the fact that the working fluid itself is the conductor. When it moves across the magnetic field, streams of charge carriers of opposite direction and polarity arise in it. The working fluid may be an electrolyte, liquid metal, or ionized gas (plasma). In a typical case, where the working fluid is a gaseous conductor (plasma), the charge carriers are primarily free electrons and positive ions, which in a magnetic field are deflected from the path along which the gas would move in the absence of a magnetic field. In strong magnetic fields or a rarefied gas, the charged particles have sufficient time between collisions for translation in a plane perpendicular to the magnetic field. This directional motion of charged particles in an MHD generator results in the appearance of an additional electric field, the Hall field, directed parallel to the flow of gas. The term “magnetohydrodynamic generator” originally denoted equipment in which an electrically conducting liquid was the working fluid. Later the term was also applied to all other apparatus of a similar type, including those using an electrically conductive gas.

The idea of the possibility of replacing a solid conductor with a liquid conductor was proposed by the English physicist M. Faraday. However, his attempt at experimental validation of his idea failed in 1832. It was not until 1851 that the English scientist Wollaston confirmed Faraday’s hypothesis by a practical experiment by measuring the electromotive force (emf) induced by tidal flows in the English Channel. Practical use of Faraday’s idea was long delayed because of the lack of knowledge about the electrophysical properties of gases and liquids. Subsequent research was conducted in two main areas, the use of the effects of induction of an emf for velocity measurements in a moving medium (for example, in electromagnetic flowmeters) and the generation of electric power.

The first patents for use of the MHD method for energy conversion were granted in 1907-10. However, the procedures and means mentioned in the patents were not appropriate for achieving ionization and producing certain indispensable electrophysical properties of working fluids. Practical realization of MHD energy conversion did not become possible until the late 1950’s, after the development of the theory of magnetohydrodynamics and plasma physics and of research in high-temperature physics. The progress of this work was mainly due to the success of rocketry and the production of new heat-resistant materials.

The first experimental MHD generator was built in 1959 in the USA. It had a rated power of 11.5 kilowatts (kW) and provided a sufficiently strong interaction between ionized gas and magnetic field. The source of working fluid (plasma at a temperature of 3000°K) was a plasmatron operating on argon with an alkali metal additive to increase the degree of ionization of the gas. The Hall effect was demonstrated on this generator. A laboratory MHD generator was built in the USA in 1960; it operated on products of combustion with alkali metal additives. By the mid-1960’s the power of MHD generators operating on products of combustion was successfully increased to 32 MW (Mark V, USA).

In the USSR the efforts of specialists were directed mainly toward the construction of complex power engineering installations incorporating MHD generators. In 1962-65 theoretical and laboratory research was conducted and laboratory plants were built. By 1965 the results of research and the accumulated engineering experience made possible the start-up of the U-02 complex prototype power plant. It included the basic components of a steam power plant and an MHD generator and operated on natural fuel. The U-02 provided experimental data that substantially expanded the concept of practical applications for MHD power plants. The design of the U-25 industrial pilot plant began somewhat later. This design work was conducted simultaneously with the research on the U-02. The successful start-up of the first industrial pilot plant in the USSR, with an MHD generator rated at 20-25 MW, took place in 1971.

A magnetohydrodynamic generator consists of a channel through which the working fluid (usually plasma) moves, a system of electromagnets to create the magnetic field, and electrodes for drawing off electric power, with a load connected to them.

Systems using an MHD generator may operate in open or closed cycles. In the first case, products of combustion are the working fluid, and the exhaust gases are discharged into the atmosphere after removal of the alkali metal additives introduced into the working fluid to increase electric conductivity. In closed-cycle MHD generators the thermal energy produced by combustion of fuel is imparted to the working fluid in a heat exchanger. The working fluid then passes through the MHD generator and is returned through a compressor or pump, completing the cycle. Jet engines, nuclear reactors, or heat-exchange devices may be used as heat sources. The working fluids for MHD generators may be products of combustion of fossil fuels, inert gases with additives of alkali metals or their salts, vapors of alkali metals, and two-phase mixtures of liquid alkali metals and their vapors or liquid metals and electrolytes. However, whereas liquid metals and electrolytes are natural conductors, a gas can be made electrically conductive only by being ionized to a certain degree. This is usually done by heating the gas to temperatures sufficient for the start of thermal ionization (most gases are ionized only at temperatures of about 10,000°K). The necessary degree of ionization can be produced at lower temperatures by enriching the gas with vapors of alkali metals. By introducing some alkali metals (such as potassium, cesium, or sodium) or their salts into the products of combustion, gases may be made conductive at temperatures as low as 2200°-2700°K.

The power of an MHD generator is proportional to the conductivity of the working fluid, to the square of its velocity, and

to the square of the intensity of the magnetic field. For gaseous working fluids in the temperature range of 2000°-3000°K, conductivity is proportional to the temperature taken to the 11th to 13th power and inversely proportional to the square root of pressure. Flow velocities in an MHD generator may have a wide range (from subsonic to supersonic velocities). The induction of the magnetic field is determined by the design of the magnets and is limited to values of about 2 teslas (T) for magnets containing steel and to a range of 6-8 T for superconducting magnetic systems.

A basic advantage of the MHD generator is the absence of moving assemblies or components that participate directly in the conversion of thermal energy into electric power. This makes possible a substantial increase in the initial temperature of the working fluid and, thus, an improvement in the efficiency of the power plant. If a conventional turbine unit is installed behind an MHD generator, the total maximum efficiency of such a power plant can attain 50-60 percent. Another distinguishing characteristic of MHD generators is the possibility of producing high rated power into a single unit (500-1000 MW) and of combining such units with steam power units of equal rated power.

There are three main areas of possible use of MHD generators:

(2) Steam power plants incorporating MHD generators (Figure 2) operating on products of combustion of fuel (in an open cycle). Such plants are the simplest in principle and are promising for industrial applications in the near future.

(2) Atomic power plants with an MHD generator operating on an inert gas preheated in a nuclear reactor (in a closed cycle). The promise of this area depends on the development of nuclear reactors with working fluid temperatures in excess of 2000°K.

(3) Cycles with MHD generators operating on liquid metals. The outlook in this area is highly promising for atomic power engineering and for special power plants with comparatively low rated power. However, data from development work on such cycles as of 1972 are not yet sufficient for a definitive evaluation of their applications in industrial power engineering. 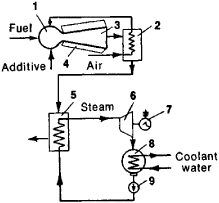 stage is a steam power stage, which uses the heat of products of combustion outside the channel of the MHD generator.

The plant operates according to the following thermal scheme. Oxygen-enriched atmospheric air is compressed in a compressor and fed to air heaters, from which the oxygen-air mixture, having been heated to the required temperature, passes into the combustion chamber. Before the air enters the combustion chamber an aqueous solution of an easily ionized additive is injected into it. The ionized products of combustion are accelerated in a nozzle and enter the channel of the MHD generator, which is located in the operating gap of a magnetic system with an induction of 2 T. From the channel of the MHD generator the products of combustion pass into a steam generator and transfer their heat to a steam power cycle; then, at a temperature of 420°-450°K, they are conducted to an additive removal system and, after cleaning, are exhausted into the atmosphere. The electrical equipment of the U-25 consists of an MHD generator and an inverter with mercury ignitrons. The stability of combined operation of the MHD generator and the multicomponent inverter equipment is provided by an automatic control system. The U-25 is equipped with remote control and monitoring system. Experimental data are processed by an electronic computer.

Power plants with MHD generators may also be used as standby or emergency power supplies in power systems, in spacecraft (on-board power systems), or as power supplies for various types of equipment requiring high power for short time intervals (for example, power sources for electric heaters in wind tunnels).

By the early 1970’s, work on the problems of MHD power conversion had expanded beyond research and the construction of small laboratory units and entered the stage of construction of industrial pilot plants. A large body of experimental data has been accumulated as a result of research and design and testing work on MHD generators. Several international symposia and national conferences on exchange of information, analysis of the state of the art, and evaluation of the prospects of MHD development have been conducted. The International Liaison Group on MHD was formed in 1966; it is composed of representatives of Australia, Austria, England, Belgium, Italy, the Netherlands, The Polish People’s Republic, the USSR, the USA, France, the Federal Republic of Germany, the Czechoslovak Socialist Republic, Switzerland, and Sweden.

Feedback
Flashcards & Bookmarks ?
Please log in or register to use Flashcards and Bookmarks. You can also log in with
Flashcards ?
My bookmarks ?
+ Add current page to bookmarks
Mentioned in ?
References in periodicals archive ?
According to the Description, "The invention relates to a weapon system for the detection and fighting of either stationary or moving objects, particularly missiles flying at supersonic speed." Alas, steam turbines or a magnetohydrodynamic generator was required to provide the necessary power.
Ray guns
The earth's magnetosphere acts as a huge generator (similar to magnetohydrodynamic generators), transforming the kinetic energy of the particles of the solar wind into electrical energy.
The clearness of the night