a method of studying the internal structure of the earth based on the study of an extraterrestrial variable electromagnetic field. The method was proposed in 1950-53 by the Soviet scientist A. N. Tikhonov and the French scientist L. Cagniard.

In the magnetotelluric method, two magnetometers and two grounded electrical measurement lines, each 500 m long, are installed mutually perpendicularly at a specific point on the surface of the earth. Such equipment is used to observe electromagnetic oscillations with a period T ranging from fractions of a second to days and to determine the apparent (average) resistance pr of rock in the region under study from the ratio of the amplitudes of electric and magnetic oscillations. Because of the skin effect the curves of the dependence on T reflect a change in the resistance of the rocks with depth: the minima ρ r correspond to low-resistance strata, and the maxima, to high-resistance strata. The thickness and resistance of the strata are found by comparing the curves obtained in practice with theoretical curves. As an example, the curve of ρ r for a model in which a stratum with good conductivity lies on a poorly conducting stratum is shown in Figure 1. 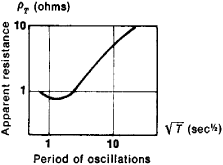 Charts of the subterranean relief of the basement or of a similar high-resistance horizon at depths of up to 5 km are compiled by means of magnetotelluric sounding, and the distribution of the electric conductivity of rock up to depths of 400-500 km is studied. Magnetotelluric sounding and a simplified modification of it—magnetotelluric profiling—are used in prospecting for petroleum and gas and also in the study of strata and reduced-resistance foci, presumably heated, in the earth’s crust and upper mantle.

Feedback
Flashcards & Bookmarks ?
Please log in or register to use Flashcards and Bookmarks. You can also log in with
Flashcards ?
My bookmarks ?
+ Add current page to bookmarks
Mentioned in ?
References in periodicals archive ?
In order to obtain more information on the stratum structure and magma chamber characteristics of Changbaishan Tianchi around the Jinjiang hot springs and Julong hot springs, a 103 km long magnetotelluric sounding prospecting line was arranged in Changbaishan with the direction of NE10[degrees].
Hydrogeochemical Characteristics and Genesis Model of Jinjiang and Julong Hot Springs in Changbai Mountain, Northeast China
(2014) Estimating the electrical conductivity of the melt phase of a partially molten asthenosphere from seafloor magnetotelluric sounding data.
Electromagnetic exploration of the oceanic mantle