, magnifier
a convex lens used to produce an enlarged image of an object
Collins Discovery Encyclopedia, 1st edition © HarperCollins Publishers 2005
The following article is from The Great Soviet Encyclopedia (1979). It might be outdated or ideologically biased.

an optical instrument for examining small objects not readily discernible by the naked eye. The object being observed is positioned slightly less than a focal length away from the magnifier. Under these conditions a magnifier provides an upright, magnified virtual optical image of the object. After passing through the magnifier, the rays from the object are again refracted in the eye and are collected at its most remote point. They enter the eye at an angle greater than do the rays from the object without a magnifier; this is the reason for the magnifying effect (see Figure 1).

Figure 1. Path of rays when viewing a small object / in a magnifier L The object is positioned in the immediate vicinity of the focal plane OO1, of the magnifier. The rays coming from point S of the object are collected at point S” on the retina of the eye. The rays from point S″ would also be collected at point S” if there were no magnifier (point S’ is the’virtual image of point S).

The magnification M is defined as the ratio of the angle α at which the virtual image of the object is seen from the center of the eye’s pupil to the angle at which the same object is seen without the magnifier at the distance of distinct vision D (Figure 2; for the normal human eye, D == 0.25 m). The magnification depends on the focal length f’ of the magnifier (usually expressed in millimeters) according to the ratio M = 250/f; the value of M may range from 2 to 40 or 50, depending on the design of the magnifier. 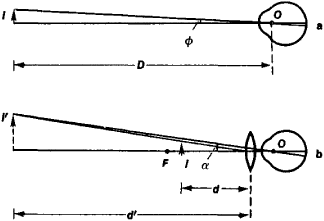 In a magnifier with high magnification the distance from the object to the surface of the magnifier is very short. This drawback is avoided in telescopic magnifiers (Figure 4), which are capable of observing remote objects with M ~ 2.5 and nearby objects with M ~ 6. Binocular (stereoscopic) magnifiers, a diagram of which is shown in Figure 5, are also in use. Magnifiers are also used to measure linear dimensions. The object to be measured is brought into coincidence with a flat glass or metal scale placed in front of the focal plane of the measuring magnifier (in practical terms it is in the plane). The images of the object and the scale are compared. The magnification of a measuring magnifier is usually 4-16X; the focal length, 10-40 mm; and the scale divisions, 0.1 mm. Such magnifiers are used to measure the width and length of letters and scratches and the distance between points.

Feedback
Flashcards & Bookmarks ?
Please log in or register to use Flashcards and Bookmarks. You can also log in with
Flashcards ?
My bookmarks ?
+ Add current page to bookmarks
Mentioned in ?
References in periodicals archive ?
Zoomax Technology Co., Limited, a global and professional low vision equipment supplier, designs, manufactures, and sells the highest quality and most cost-effective video magnifiers. Their product range covers handheld, portable, and desktop video magnifiers.
Zoomax Announces New Product, 3-in-1 Portable Electronic Magnifier Mars HD for People with Low Vision
However, in areas where there is no local NHS low vision service or the waiting times are long, practitioners may wish to offer a basic low vision service to patients by providing a consultation and selling a limited range of magnifiers. Although only a minority of practitioners actively participate in low vision clinics, most optometrists will come across patients with some form of visual impairment during routine eye examinations.
Low vision aids: keeping it simple: This article takes a back-to-basics approach to using simple low vision aids that can be easily dispensed from the consulting room
Reizen Aukey Special Edition Video Magnifier - View Magnified Color, B/W and Reverse Images; Toggle between 1.9x or 13.6x Magnification Settings
MaxiAids Releases Top 10 Accessible Holiday Gift Lists to Kick Off the 2014 Holiday Shopping Season
For patients who seek a spectacle-mounted option but struggle with shorter working distances, spectacle-mounted telescopic magnification offers an increased working distance compared to a spectacle magnifier of the same power.
Light and magnification: practice-based solutions, part 2
I could have gotten a 24-inch desktop magnifier, but nowhere in my apartment to keep it,” said Amy Brown, a Zoomax customer with low vision.
Zoomax Announces New Affordable 19-inch Desktop Electronic Magnifier Panda for People with Low Vision
* Stand magnifiers that were also found to have high reflective illuminance included the Schweizer Kryptostar 3X rechargeable stand magnifier and the Eschenbach halogen 5X and 12.5X stand magnifiers with plug-in handles.
Contrast sensitivity function scores, choices of illuminated stand magnifiers, and reading
We also appreciate far more about the effects of macular disease than the local hardware store, so it would seem natural that patients should approach their optometrist or dispensing optician to determine which magnifier may be best to address their needs.
Practice-based solutions for light and magnification, Part 1
specializes in the design, development and promotion of high-quality, cost-effective video magnifiers. These include the most popular handheld video magnifier, Snow, the lightest student portable video magnifier, Mars HD and the desktop video magnifier, Aurora HD.
Two of the Largest Low Vision Manufacturers in the World Announce a Merger
Freedom Scientific recently announced a new addition to its TOPAZ Desktop Video Magnifier line of products.
Video magnifier with a monitor that swivels
The CANDY 5 HD II Handheld Video Magnifier has a 5-inch high-definition LCD wide-screen designed for individuals with low vision.
VIDEO MAGNIFIER
The coalition "Under the Magnifier" said that "before the announcement of the General Elections, obvious cases were recorded of premature election campaigns by political parties Our Party, Democratic Progress Party, Alliance of Independent Social Democrats, Union for a Better Future of BiH, the Social Democratic Party of BiH, the Socialist Party, the Serb Democratic Party and the Party of Democratic Action'.
'Under the Magnifier' records cases of premature election campaign