in astronomy, measure of the brightness of a star or other celestial object. The stars cataloged by Ptolemy (2d cent. A.D.), all visible with the unaided eye, were ranked on a brightness scale such that the brightest stars were of 1st magnitude and the dimmest stars were of 6th magnitude. The modern magnitude scale was placed on a precise basis by N. R. Pogson (1856). It was found by photometric measurements that stars of the 1st magnitude were about 100 times as bright as stars of the 6th magnitude, i.e., 5 magnitudes lower. Pogson defined a difference of 5 magnitudes to be exactly equal to a hundredfold change in brightness, so that stars differing by 1 magnitude differ in brightness by a factor of 2.512 (the 5th root of 100). The modern magnitude scale permits a precise expression of a star's relative brightness and extends to both extremely bright and very dim objects. Thus, an object 2.512 times as bright as a 1st-magnitude star is of 0 magnitude; brighter objects have negative magnitudes. The sun's magnitude, for example, is −26.8. On the other hand, a faint star of 16th magnitude is only 1/10,000 as bright as a 6th-magnitude star, the dimmest that can be seen with the naked eye. Magnitudes determined on the basis of an object's relative brightness as seen from the earth are known as apparent magnitudes. Astronomers also assign a star an absolute magnitude, which is the magnitude that a star would have if it were located at a standard distance of 10 parsecsparsec
[parallax + second], in astronomy, basic unit of length for measuring interstellar and intergalactic distances, equal to 206,265 times the distance from the earth to the sun, 3.26 light-years, or 3.08 × 1013 km (about 19 million million mi).
..... Click the link for more information.  (32.6 light-years). Absolute magnitude is a measure of the intrinsic luminosityluminosity,
in astronomy, the rate at which energy of all types is radiated by an object in all directions. A star's luminosity depends on its size and its temperature, varying as the square of the radius and the fourth power of the absolute surface temperature.
..... Click the link for more information.  of the star, i.e., its true brightness. Since in modern times magnitudes are measured with photometers and electronic detectors, which may be more sensitive to light at one wavelength than at another wavelength, it is necessary to specify the method and the filter used when comparing two or more magnitudes. The magnitude usually referred to is the visual, or photovisual, magnitude, measured with a photometer.
The Columbia Electronic Encyclopedia™ Copyright © 2013, Columbia University Press. Licensed from Columbia University Press. All rights reserved. www.cc.columbia.edu/cu/cup/ 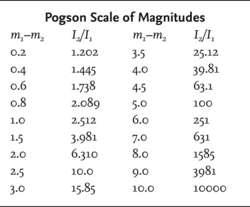 (mag -nă-tewd) A measure of the brightness of stars and other celestial objects. The brighter the object the lower its assigned magnitude. Expressions of magnitude are used primarily in the visible, near-infrared, and near-ultraviolet regions of the spectrum.

The apparent magnitude, symbol: m , is a measure of the brightness of a star, etc., as observed from Earth. Its value depends on the star's luminosity (i.e. its intrinsic brightness), its distance, and the amount of light absorption by interstellar matter between the star and Earth. In ancient times the visible stars were ranked in six classes of apparent magnitude: the brightest stars were of first magnitude and those just visible to the naked eye were of sixth magnitude. This system became inadequate as fainter stars were discovered with the telescope and instruments became available for measuring apparent brightness. In the 1850s it was proposed that the physiological response of the eye to a physical stimulus was proportional to the logarithm of that stimulus (Weber-Fechner law). A difference in apparent magnitude of two stars is thus proportional to the difference in the logarithms of their brightness, i.e. to the logarithm of the ratio of their brightness.

In order to make the magnitude scale precise the English astronomer N.R. Pogson proposed, in 1856, that a difference of five magnitudes should correspond exactly to a brightness ratio of 100 to 1. (W. Herschel had shown this to be approximately true.) Hence two stars that differ by one magnitude have a brightness ratio of 1001/5:1, i.e. a ratio – known as the Pogson ratio – of 2.512. A star two magnitudes less than another is (2.512)2, i.e. 6.3 times, brighter, and so on. In general the apparent magnitudes m 1 and m 2 of two stars with apparent brightness I 1 and I 2 are related by:

The Pogson scale, based on the Pogson ratio, is now the universally adopted scale of magnitude (see table). The zero of the scale was established by assigning magnitudes to a group of standard stars near the north celestial pole, known as the North Polar Sequence, or more recently by photoelectric measurements. The class of magnitude-one stars was found to contain too great a range of brightness and zero and negative magnitudes were consequently introduced: the higher the negative number, the greater the brightness. The scale also had to be extended in the positive direction as fainter objects were discovered. Values can be recorded in tenths, hundredths, even thousandths of a magnitude.

Originally apparent magnitude was measured by eye – visual magnitude, m vis – usually in conjunction with an instrument by which brightnesses could be compared. It is now measured much more accurately by photometric techniques but previous to that photographic methods were used. Photographic magnitudes, m pg, are determined from the optical density of images on ordinary film, i.e. film that has a maximum response to blue light. Photo?-visual magnitudes, m pv, are measured using film that has been sensitized to light – yellowish green in color – to which the human eye is most sensitive. In the early International Color System these two magnitudes were measured with films having a maximum response to a wavelength of 425 nanometers (m pg) and 570 nm (m pv ), the magnitudes being equal for A0 stars.

A suitable combination of photometer and filter can select light or other radiation of a desired wavelength band and measure its intensity. These photoelectric magnitudes can be measured over either narrow or broad bands. The UBV system of stellar magnitudes is based on photoelectric photometry and has been widely adopted as the successor of the International System. The photoelectric magnitudes, denoted U , B , and V are measured at three broad bands: U (ultraviolet radiation) centered on a wavelength of 365 nm, B (blue) centered on 440 nm, and V (visual, i.e. yellowish green) centered on 550 nm. These magnitudes can also be written m U, m B, and m V. The zero point of the UBV system is defined in terms of standard stars having a carefully studied and agreed magnitude. Another important photometric system, the uvby system, uses filters passing narrower wavelength bands than in the UVB system.

Apparent magnitude is a measure of the radiation in a particular wavelength band, say of blue light, received from the celestial body. Apparent bolometric magnitude, m bol, is a measure of the total radiation received from the body. The bolometric correction (BC) is the difference m V – m bol between the apparent visual (V) and bolometric magnitudes; it is generally defined to be zero for stars with surface temperatures similar to the Sun. Other wavebands apart from V are sometimes used in calculating BC.

Apparent magnitude gives no indication of a body's luminosity: a very distant very luminous star may have a similar apparent magnitude as a closer but fainter star. Luminosity is defined in terms of absolute magnitude, M , which is the apparent magnitude of a body if it were at a standard distance of 10 parsecs. It can be shown that the two magnitudes of a body are related to distance d (in parsecs) or its annual parallax, π (in arc seconds):

[′mag·nə‚tüd]
(astronomy)
The relative luminance of a celestial body; the smaller (algebraically) the number indicating magnitude, the more luminous the body. Also known as stellar magnitude.
(geophysics)
A measure of the amount of energy released by an earthquake.
(mathematics)
absolute value
McGraw-Hill Dictionary of Scientific & Technical Terms, 6E, Copyright © 2003 by The McGraw-Hill Companies, Inc.

1. Maths a number assigned to a quantity, such as weight, and used as a basis of comparison for the measurement of similar quantities
2. Astronomy the apparent brightness of a celestial body expressed on a numerical scale on which bright stars have a low value. Values are measured by eye (visual magnitude) or more accurately by photometric or photographic methods, and range from --26.7 (the sun), through 1.5 (Sirius), down to about +30. Each integral value represents a brightness 2.512 times greater than the next highest integral value
3. Geology a measure of the size of an earthquake based on the quantity of energy released: specified on the Richter scale
Collins Discovery Encyclopedia, 1st edition © HarperCollins Publishers 2005

Feedback
Flashcards & Bookmarks ?
Please log in or register to use Flashcards and Bookmarks. You can also log in with
Flashcards ?
My bookmarks ?
+ Add current page to bookmarks
Mentioned in ?
References in periodicals archive ?
A magnitude 2.1 quake of tectonic origin struck at 10:11 a.m.
Aftershocks possible from DavOcc, N. Samar quakes
In Mobo town, a tremor with 2.6 magnitude was also recorded at 2:11 a.m.
9 quakes hit Masbate, Catanduanes
Then twin earthquakes hit Davao region with magnitude 4.
Duck, cover and hold, not to 'shake, rattle and roll'
Powerful earthquakes with magnitude more than five were also recorded at several places like Indonesia (4.9, 5.5, 5), Fiji (4.9, 5.7, 5.7), and Iran (4.8) as well in the past 24 hours.
Multiple Earthquakes Strike Pacific Region, Including One In California
A magnitude 8.2 earthquake shows that the number of homes damaged still grows 32 percent from 1.9 million to 2.5 million.
Earthquake impact could double for Northern and Southern California
The catalog NEIC is essentially incomplete, within the analyzed territory, for magnitudes lower than 4.0 The catalog NEIC appears spatially complete, when compared with PMD for magnitude greater than 4.0 to 5.0 The catalog PMD and NEIC are nearly identical, during the period 1962 to 2004, for magnitudes around 4.0?
AN ANALYSIS OF PAKISTAN'S LOCAL NETWORK CATALOG OF EARTHQUAKE FOR THE PERIOD OF 1905-2007
However, we disagree about use of variance explained to assess magnitude.
Magnitude Matters
where [GAMMA] is the average width of resonances and D is the typical spacing between J = 1 resonances, and the following order of magnitude estimates apply: [a.sub.p] - 1 = O([[GAMMA].sup.2]/[D.sup.2]), [~.a.sub.p] - 1 = O([[GAMMA].sup.2]/[D.sup.2]), and [b.sub.p] = O([GAMMA]/D).
Bounds on time reversal violation from polarized neutron capture with unpolarized targets
Mars can be seen tonight in the constellation of Aquarius,and has a magnitude of 2.39.
view from the tank
For example, at locations 60 km from a temblor's epicenter, the magnitude of an impending quake could be known about 16 seconds ahead of time.
Seismic-alert system could give Los Angeles a few seconds' warning. (Sensing a Vibe)
The Tottori quake's strength was magnitude 7.3, while the Great Hanshin Earthquake was 7.2.
Kobe quake's magnitude revised to 7.3 from 7.2+
At 9:24 a.m., a magnitude 5.8 earthquake jolted Basco, Batanes, wherein Intensity IV was felt.
8 dead, 60 hurt in Batanes quake; public warned vs. aftershocks