In the lowest energy state of a simple ferromagnet, all the magnetic moments of the individual atoms are parallel (say, to the z axis). Each atomic moment derives mainly from the electron spin angular momentum of the atom. In the next-to-lowest energy state (first excited state), the total z component of spin angular momentum, Sz, is reduced by one unit of &planck; = h/2&pgr;, where h is Planck's constant. In the case of a crystalline material, this unit is shared equally by all the spins, each of which lies on a cone (see illustration), precessing at an angular rate &ohgr;. These spins form a wave, known as a spin wave, having a repeat distance or wavelength, λ. The wave amplitude (that is, the cone angle) is extremely small, because of the sharing among all the spins whose number N is very large, roughly 1023. Thus, each atom's share of the reduction in Sz, labeled Δ, is only &planck;/N, whereas the z component of the atomic spin in the fully aligned state is typically 1–10 times &planck;. It follows from simple geometry that the cone half-angle is of order 10-11 to 10-12 radian. The state with this value of the amplitude is said to be a one-magnon state with wave number k = 1/λ. If Δ is doubled to 2&planck;/N, the state is a two-magnon state, and so forth. The integer values of NΔ/&planck; correspond to the possible changes in Sz being integral multiples of &planck;. See Electron spin, Wave motion 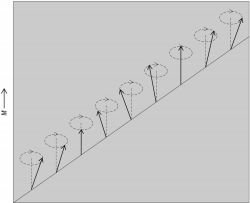 Spin wave in a linear ferromagnetic array of precessing atomic spins of equal magnitude, represented as arrows (vectors) in perspective

While the spin waves associated with energy states, that is, stationary states, in crystals vary sinusoidally in space (see illustration), magnons can be associated, instead, with nonstationary states (wave packets) in some situations. Closely analogous to magnons are phonons and photons, quanta of mass-density waves and electromagnetic waves, respectively. See Electromagnetic wave, Phonon, Photon, Quantum mechanics

a quasiparticle that corresponds to an elementary excitation of a system of interacting spins. Crystals with several magnetic sublattices (such as antiferromagnets) may have several types of magnons that have different energy spectra. Magnons obey Bose-Einstein statistics. They interact with each other and with other quasiparticles. The existence of magnons has been confirmed by experiments on neutron and light scattering accompanied by the production of magnons.

Feedback
Flashcards & Bookmarks ?
Please log in or register to use Flashcards and Bookmarks. You can also log in with
Flashcards ?
My bookmarks ?
+ Add current page to bookmarks
Mentioned in ?
References in periodicals archive ?
Seki et al., "Thermally driven ratchet motion of a skyrmion microcrystal and topological magnon Hall effect," Nature Materials, vol.
Spin-Wave-Driven Skyrmion Motion in Magnetic Nanostrip
For some strange reason Mandrake was the only earthling who was a friend of Magnon, and the latter often saved the magician and the earth from all kinds of disasters.
Will We Always Have Paris?
The Tax Court admitted that in a number of cases, including Magnon, it had held that there was a constructive dividend where a corporation provided construction services to a shareholder and the shareholder did not pay for the services.
Provision of services by corporation to shareholder not a constructive dividend
Magnon International has taken another step to provide better quality experience to its users.
Magnon International Offers Responsive Web Design Services
As for Johnson's Cro Magnon Man comment, what did Jones make of that?
'Cro Magnon man' Adam is happy to have mayor Boris as his most famous fan
Designed to keep pesky estrogen at a safe, manageable distance, man caves bring homeowners back to a simpler time -- namely, the cro magnon stage, when men lived in caves.
Rec rooms fit for the Super Bowl
Charged Affairs of Saudi Arabia Muhammad Ali Badavi and Ambassador of Afghanistan Magnon Ghulab were chief guests at the inaugural ceremony while Deputy High Commissioner of Bangladesh, Rector IIUI Professor Fateh Muhammad Malik and President IIUI Dr.
Cultural week starts at IIUI male campus
Leonor Villegas de Magnon. Edicion e introd, de Clara Lomas.
Memorias de una rebelde
The writings of specific women, such as Jovita Idar's writing in her family's periodical La Cronica (The Chronicle) and Leonor Villegas de Magnon's autobiography/memoirs, further problematized the articulation of gender by their "erasure of the geopolitical border," focusing on political/cultural practices across the border and consciously developing a transborder discourse.
Transborder discourse: the articulation of gender in the Borderlands in the early twentieth century