(mär`jərəm), Old World perennial aromatic herb (Marjorana hortensis) of the family Labiatae (mintmint,
in botany, common name for members of the Labiatae, a large family of chiefly annual or perennial herbs. Several species are shrubby or climbing forms or, rarely, small trees.
..... Click the link for more information.  family), cultivated in gardens for flavoring. The tops yield origanum oil, once used medicinally but more recently for perfuming soaps. The closely related European pot, or wild, marjoram (Origanum vulgare) has similar uses and is the spice usually sold as oreganooregano
, name for several herbs used for flavoring food. A plant of the family Labiatae (mint family), Origanum vulgare, also called Spanish thyme and wild marjoram, is the usual source for the spice sold as oregano in the Mediterranean countries and in the United States.
..... Click the link for more information. , although other species may be called oregano. The generic names Marjorana and Origanum are frequently interchanged. Marjoram is classified in the division MagnoliophytaMagnoliophyta
, division of the plant kingdom consisting of those organisms commonly called the flowering plants, or angiosperms. The angiosperms have leaves, stems, and roots, and vascular, or conducting, tissue (xylem and phloem).
..... Click the link for more information. , class Magnoliopsida, order Lamiales, family Labiatae. 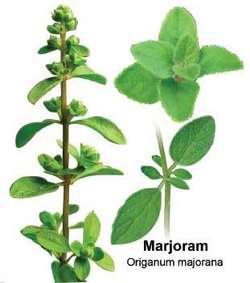 [′mär·jə·rəm]
(botany)
Any of several perennial plants of the genera Origanum and Majorana in the mint family, Labiatae; the leaves are used as a food seasoning.