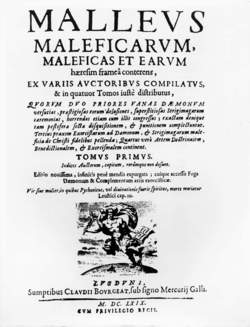 Feedback
Flashcards & Bookmarks ?
Please log in or register to use Flashcards and Bookmarks. You can also log in with
Flashcards ?
My bookmarks ?
+ Add current page to bookmarks
Mentioned in ?
References in periodicals archive ?
Inicia-se o panorama pela cultura greco-latina, passando pela Idade Media, inclusive pela figura da mulher diabolica, a bruxa, delineada em detalhes no Malleus Maleficarum, o manual de caca as bruxas na Inquisicao.
The Echo of Ghosts: Misogyny Perpetuation in the Canon/ O eco de fantasmas: perpetuacao da misoginia no canon
It sounds almost counterintuitive, and the more so during the period examined in the present book, the decades following the publication of Innocent VIII's bull, Summis desiderantes affectibus (1484)--papal licensing of inquisitorial excess--and Heinrich Institoris's treatise, Malleus Maleficarum (1486), to which, in many editions, Innocent's bull served as a preamble.
Witchcraft, Superstition, and Observant Franciscan Preachers: Pastoral Approach and Intellectual Debate in Renaissance Milan
The foundation&nbsp;(http://www.epilepsy.com/article/2014/3/epilepsy-and-witchcraft-brief-history) quotes &nbsp;from a 1400s religious-based text called The Malleus Maleficarum which says "there is no bodily infirmity, not even leprosy or epilepsy, which cannot be caused by witches ...
4 Real Health Problems Blamed On Witchcraft And The Devil
The great medieval demonological treatise is The Malleus Maleficarum published between 1485 and 1486.
The servants of the devil. The demonization of female sexuality in the medieval patristic discourse
A commonplace in studies of witchcraft is that the principal shift in the understanding of magic happened in the fifteenth century, a view often supported by reference to Kramer and Sprenger's Malleus Maleficarum (1486).
Mitchell, Stephen A.: Witchcraft and Magic in the Nordic Middle Ages
(33) Hans Peter Broedel, The Malleus Maleficarum and the Construction of Witchcraft: Theology and Popular Belief (Manchester: Manchester University Press, 2003), 43: "this Augustinian conception of the devil was never entirely displaced during the Middle Ages, but by the twelve century it was being amended in the course of new learned speculation about the devil and his role in creation.
Demonology at a crossroads: the visions of Ermine de Reims and the image of the devil on the eve of the great European witch-hunt
I was very fortunate to win joint first prize for my films Malleus Maleficarum and Nurses Strike Train.
Grateful for film-making opportunity
This new turn was most famously steered by Heinrich Kramer, whose book Malleus Maleficarum (1487) called for more aggressive witch-hunting.
Rainer Decker. Witchcraft & the Papacy: An Account Drawing on the Formerly Secret Records of the Roman Inquisition