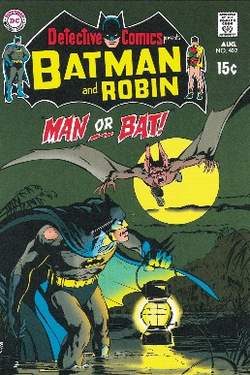 Man-Bat is a vampire-like character introduced in the 1970s by DC Comics as the stiff guidelines of the 1954 Comics Code were being relaxed. Created by Frank Robins, Man-Bat made his initial appearance in Detective Comics (No. 400) in early 1970. The original story concerned Kirk Langstrom, an expert on nocturnal mammals at the museum in Gotham City, the home of superhero Batman. Langstrom had become obsessed with the idea of besting Batman in some way. In seeking to accomplish his goal, he concocted a serum made from the glands of bats. The serum gave him a natural sonar power and the supersensitive hearing abilities associated with bats. There was an unwanted side effect—he began to transform into a giant bat creature.

Langstrom was trying to find some way out of his predicament when thieves broke into the museum. Batman was about to be defeated by the thieves when Man-Bat showed up to help. In their next encounter, Man-Bat attempted to steal drugs that he hoped would reverse his condition. At the time, Langstrom was engaged, his marriage was approaching, and he was trapped in his bat form.

His fiance, Francine, took some of the serum as an act of love and thus joined Langstrom in his batlike existence. With Batman’s help they both received an antidote and returned to human form.

Their story appeared to be over. However, there was enough reader reaction to include several new Man-Bat stories in future issues of Detective Comics. In No. 429, Francine was bitten by a vampire bat and became a vampire she-bat. Her vampiric side was cured by a complete blood transfusion. Meanwhile, Langstrom had continued his research and attained the ability to turn into Man-Bat at will by taking some pills. He became a crime fighter like Batman. In this capacity he earned a large reward that left him independently wealthy. At the end of 1975, DC Comics tried to test their new character, who seemed to have a large following, with his own comic book. The first issue of Man-Bat appeared in December 1975. In it, Langstrom was called upon to deal with super criminal Baron Tyme, who had discovered a means to control Francine and use her to commit crimes.

Tyme’s intervention reactivated Francine’s vampirism. The new comic book was short lived, however, and after only two issues, Man-Bat returned to Detective Comics. Over the next decade, Man-Bat made sporadic appearances to interact with Batman (for example, in Batman Family No. 18 in 1978 and Batman No. 348 in 1982) and occasionally with other DC characters, such as Superman (DC Comics Presents No. 335 in 1981). In 1984 a second attempt was made to revive Man-Bat in a separate publication. The original Man-Bat stories from Detective Comics were reprinted, but only one issue appeared, and Man-Bat returned to a secondary role in the ongoing DC cast.

Through the 1990s to the present, Man-Bat has made periodic appearances and, in the hands of new artists John Bolton and Kelley Jones, developed a more sinister appearance. He has also been involved in more stories which have pushed him to the edge of human society. In “Final Night of the Man-Bat,” for example, Doug Moench and Jones placed Man-Bat in a Gotham City that had lost its sunlight and Batman had to save Man-Bat from losing his humanity altogether and becoming a killer.

In the middle of the first decade of the new century, Batman is apparently killed in a story line called the “Final Crisis,” though the people of Gotham only know that he has disappeared and seemingly abandoned them. While a power struggle begins to fill Batman’s place, Langstrom is struggling with the possibility of changing into Man-Bat and killing his wife as a tragic result. His wife disappears and, while searching for her, Langstrom is captured by the villainous Doctor Phosphorus, from whom he learns that he no longer needs the serum to make the change into Man-Bar. When the opportunity arises, he changes in order to save his wife from Phosphorus’s evil designs.

Man-Bat has proved popular enough to remain an active character in Batman’s comic book world and to make the jump to television beginning with Batman: The Animated Series (1992–1995). There have been several Man-Bat action figures.

Feedback
Flashcards & Bookmarks ?
Please log in or register to use Flashcards and Bookmarks. You can also log in with
Flashcards ?
My bookmarks ?
+ Add current page to bookmarks
Mentioned in ?
References in periodicals archive ?
The Haunted Man Bat For Lashes It's hard to work out why Natasha Khan - better known by her stage name Bat For Lashes - doesn't sell as many records as her flame-haired contemporary Florence Welch, although she has notched up Mercury and Brit nominations.
Pop; CD releases
Meanwhile I'm hanging upside down in our paper mache "tree" in my Burning Man bat costume yammering on about how Lost Boys changed my life because Jamie Gertz was so hot, and Marci was sitting on her blanky repeating something about lights and God and that movie about the little mouse.
They're back Team Dresch 2.0: the hottest '90s dyke band is back--and they're all grown up
When seven wickets are down the last man bats on his own - hence the name - but can only score even numbers of runs.
Stands a chance of being a big hit
In this book, Goodman takes us back to the summer of 1835, when the Sun newspaper flooded New York with tales of man bats, unicorns, poppies, and other life forms on the moon, supposedly discovered by a British astronomer.
The Sun and the moon; the remarkable true account of hoaxers, showmen, dueling journalists, and lunar man-bats in nineteenth-century New York
The last man bats alone till he either gets out or the quantum of overs are exhausted.
JCL Six-a-Side event opens
I wanted to be sure that the high results when the leadoff man bats first were not overwhelmed by the first inning effect.
Effect of batting order (not lineup) on scoring