Man of Bronze | Article about Man of Bronze by The Free Dictionary
https://encyclopedia2.thefreedictionary.com/Man+of+Bronze
Printer Friendly

(redirected from Man of Bronze) 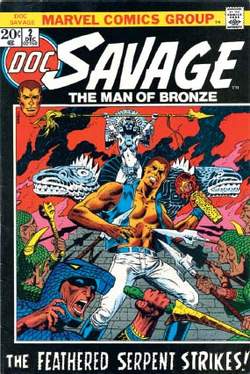 With his rippling muscles, extraordinary strength, and genius-level IQ, he could outrun a horse, dodge a speeding bullet, speak in a myriad of foreign languages, and perform life-saving surgery, and then, after saving the world yet again, he would retire to his secluded Arctic hideout, the Fortress of Solitude. No, this is not a description of Superman but is, in fact, Doc Savage, a hero who predated the Man of Steel by five years, and who laid the foundation for the superhero explosion that occurred in 1938 with Superman’s arrival. In the wake of their successful Shadow pulp magazine, Street & Smith publisher Henry Ralston and editor John Nomaric dreamed up their ideal hero, a cross between Tarzan and Sherlock Holmes, as a sort of counterpoint to the darker, sinister Shadow. They handed over the concept to pulp veteran Lester Dent (writing under the pseudonym Kenneth Robeson) and the first issue of Doc Savage magazine hit the stands in March 1933. Sales soon rose to 200,000 per issue—the title was a hit.

Clark Savage Junior had been raised as the perfect man, a master of all things intellectual and physical, and he was given the nickname “Doc” because of his skills as a surgeon. At a wake to mourn his late father, Doc gathers together five friends—all masters in their respective fields—who swear to maintain his father’s ideals of travel, adventure, and punishing evil. The group consists of the dapper Harvard lawyer “Ham” Brooks, the strong engineer Renny, the bespectacled and verbose archaeologist Johnny, the electrical expert Long Tom, and Monk, a cantankerous, ape-like chemical genius whose constant baiting of Ham was one of the feature’s recurring themes. Operating out of the eighty-sixth floor of a certain New York skyscraper (that closely resembles the Empire State Building), the happy band trek around the globe, from exotic location to hidden tribe to evil genius and back again.

Not content with his imposing physique, bronzed skin, fabulous wealth, and secret hideout, Doc Savage, a.k.a. the Man of Bronze, was a master inventor, and his stories were chock-full of his super-inventions, including a pocket knife that fired sleep-inducing “mercy” bullets from its handle (since Doc did not believe in killing his enemies), a belt with its own grappling hook, miniature bombs, false fingertips fitted with needles that caused unconsciousness, an Atomic disintegrator, oxygen pills, exploding buttons, and clothes that either held, or doubled as, weapons. Add to this an array of super-gadgetized vehicles—including his Helldiver, capable of sailing under polar ice—and one can easily see that Doc was indeed a hero to be reckoned with. In the course of their adventures, he and his band encountered all manner of weird and colorful adversaries, including the Black Witch, the Annihilist, the Stone Man, the Vanisher, and the Czar of Fear.

Lester Dent’s prose was punchy, breathless, and fast-moving; it grabbed the reader and did not let go for a moment. With a contract binding him to an output of 70,000 words a month, Dent himself had to be something of a superman! In fact, he not only managed that workload, writing almost every story for 181 issues, but also found time to contribute to other titles to boot. Physically, Dent was an impressive figure—tall, strong, a member of the Adventurers’ Club—as well as being a diver, a magician, and a sailor with his own yacht, and so it is not hard to see Doc Savage as an extension of Dent’s own personality.

Street & Smith was quick to exploit Doc’s popularity with a fan club, portrait, lapel pin, and his own short-lived radio show in 1934. However, when Superman and his hundreds of followers appeared on the newsstands, sales of pulps were gradually hurt across the board, since they largely shared with the new comics the same young readership. Street & Smith itself entered the emerging comic-book market in 1940, only a few months after Marvel and Fawcett, with Shadow Comics, which also featured a strip version of Doc Savage, drawn by Maurice Gutwirth. This backup strip lasted five issues, but even before it ended, Doc had emerged in his own comic (in May 1940). Early episodes closely followed the pulp stories, but with issue #5 of Doc Savage Comics (August 1941), the Jack Binder studio reinvented the pulp magazine hero into a superhero: Doc acquired a Tibetan sacred hood, armed with a “miracle-working ruby” that could deflect bullets and hypnotize his foes. This bare-chested, hood-wearing superhero (for such he now undoubtedly was) was known as Doc Savage-the Invincible (often simply referred to by his new name, the Invincible); unfortunately, in sales terms he was certainly not the latter, as the comic folded after a mere twenty issues, in 1943. Nevertheless, the superhero makeover of the character continued on in a 1943 radio show.

Returning to the back pages of Shadow Comics, Doc’s comics adventures continued until that title’s demise in 1949, though in those strips he was once more just plain Doc. Doc’s comic strips were written by Otto Binder, among others, and were drawn initially by his brother John’s studio, though later by Al Bare and Bob Powell. Just as Shadow Comics was canceled in 1949, so too was its pulp equivalent, and Doc’s pulp magazine as well. The comparison between the demise of the pulp heroes and comics’ own superheroes, most of whom had been canceled by the end of the decade, is a fascinating one. Clearly, both were fulfilling the same need for heroes, first during the Great Depression and then later during World War II—a need that apparently no longer existed in a postwar era. When superheroes experienced their extraordinary rebirth in the 1960s, so too would Doc Savage rise again.

In 1964, Bantam repackaged the first of Lester Dent’s Doc Savage stories in paperback. More books followed, and in time the new paperback series became a publishing phenomenon, eventually reprinting all 181 original stories and adding new ones by Philip José Farmer and fan/historian/comic writer Will Murray. With sales running into the tens of millions, it is no surprise that comic book companies soon took notice, and a Gold Key one-shot comic duly appeared in 1966. Marvel was next in line for the license, releasing two well-crafted series: first a color adaptation of various Dent stories (eight issues, 1972-1974) and then an all new black-and-white magazine by Doug Moench, John Buscema, and Tony Dezuniga (eight issues, 1975-1977), which has come closest to capturing the spirit of the pulps. A couple of fanciful crossovers also saw Doc and his chums guest-star with Spider-Man (Giant-Size Spider-Man #3, 1974) and the Thing (Marvel Two-in-One #21, 1976).

The increased interest in Doc Savage as a hero also came to the attention of George Pal, who produced a 1975 movie starring Ron Ely. Critics found the film to be cinematically appealing and Ely the perfect Doc; however, many mentioned its weak script, the tone of which veered dangerously close to camp. Longtime fan and artist Jim Steranko also weighed in with a new fan club, the Doc Savage Brotherhood of Bronze. By the end of the decade, only the paperbacks were left, but in recent years a succession of comics publishers—DC, Millennium, Innovation, and Dark Horse—have released their own versions of the great man. Most of these have been relatively true to the character’s pulp roots. DC’s 1988 series brought him forward to the present and also featured a crossover with the Shadow. In 1995, Dark Horse Comics released The Shadow and Doc Savage miniseries. Starting in 2010, DC Comics published a new Doc Savage comics series, but it proved to be short-lived. However, it is undoubtedly true that Doc Savage’s legacy lives on to some degree in each and every superhero comic published today. —DAR

Feedback
Flashcards & Bookmarks ?
Please log in or register to use Flashcards and Bookmarks. You can also log in with
Flashcards ?
My bookmarks ?
+ Add current page to bookmarks
Mentioned in ?
References in periodicals archive ?
Artist Alley in Columbus will feature Jonathan Glapion ("Dark Knights Metal," "Batgirl"), Simon Fraser ("2000AD"), Clayton Henry ("Black Lightning," "X-Men"), Shawn Coss ("Cyanide & Happiness"), Mostafa Moussa ("Superman," "Fantastic Four"), Jeremy Clark ("GFT: Apocalypse," "GFT: Legacy"), Joe Rubenstein ("Wolverine," "Warlock"), Darryl Banks ("Doc Savage: Man of Bronze," "The Wild Wild West"), Steve Geiger ("Punisher," "Spider-Man") and more.
Mike Colter, Winston Duke, John Barrowman, Billy Boyd Among Top Celebrities Scheduled to Attend Wizard World Comic Con Columbus, June 8-10
QI'm a fan of Burt Lancaster and loved the movie Man Of Bronze but no one seems to know it or believe it existed.
Showbiz; THE MAN INTHE KNOW
Ron Ely became the first television Tarzan in the mid 1960s and starred on the big screen as Doc Savage - the Man Of Bronze.
STRAIGHT TO THE point
He is best remembered for his iconic characters such as Doc Save, The Man of Bronze. From his beginning work with the publishing firm of Street & Smith, to his last works done for Popular Publications, he raised the level of this specialized and commercial form of popular art to the level of fine art through his use of unified designs, color, and visual drama.
Walter Baumhofer
Two figurines from Ur, a man of bronze with an aryballos and a female figurine of gold on a pin, both of sixth century date, have been called Babylonian because of their softly modeled style.
Bronzeworking Centers of Western Asia: c. 1000-539 B.C
I say that Burt Lancaster played Jim Thorpe in a movie called Man Of Bronze, friends disagree.
Showbiz Sam
Doc Savage, Man of Bronze, was the other star of this great trio, a golden-skinned giant of superhuman strength and alarming scientific skills leading his five faithful followers into battle.
THE FACTS ABOUT PULPS FICTION