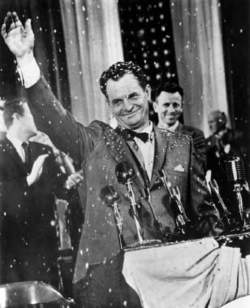 James Gregory played the title role in the 1962 film The Manchurian Candidate, in which a political candidate is brainwashed by Communists to become an unwitting assassin. Are some killers, such as Lee Harvey Oswald, types of “Manchurian candidates”?

The idea of programming a hypnotically conditioned, drug-controlled assassin to kill was born in a novel and a motion picture. Another instance of life imitating art.

The 1962 motion picture The Manchurian Candidate, directed by John Frankenheimer, with a screenplay by George Axelrod based on a novel by Richard Condon, has become synonymous with “programmed assassin.” Someone who has been hypnotized, brainwashed, drugged, or conditioned through a combination of mind-control techniques to become a killer without being aware of his or her lethal programming is referred to as a “Manchurian Candidate.” The assassin would be “triggered” into entering a trance state and committing the murder by a key word, phrase, or symbol. (For example, in the film the “trigger” was the Queen of Diamonds playing card.) Once the target victim has been assassinated, the programmed subject will have no memory of his or her role in the dreadful deed—and quite likely will become a dupe, arrested, convicted, and sentenced as a crazy “lone gunman” who acted independently, unattached to any conspiracy.

The motion picture starred Frank Sinatra, Laurence Harvey, Janet Leigh, Angela Lansbury, and Henry Silva and has been described as a hybrid that combined the genres of horror, science fiction, suspense, political satire, war film, and black comedy. The storyline begins in 1952 during the Korean War (1950–53) with Sinatra (Capt./Maj. Bennett Marco), Harvey (Sgt. Raymond Shaw), and members of their platoon being betrayed by Chunjin (Henry Silva), their Korean interpreter. The infantrymen are ambushed, captured, and whisked away by helicopter to Manchuria, where they are subjected to mind-control experiments by extremely accomplished and very skillful Communist masters of brainwashing. Shaw is programmed to become a political assassin when he returns to the United States, and the nine platoon members who survived the torture and mind-control experiments are given false memories of Shaw’s supposed heroism in saving nine of his men from being slaughtered in the ambush that killed the rest of the night patrol. Shaw is awarded the Congressional Medal of Honor, and the Communist plot appears to be working until Marco begins to have dreams and memories of what really happened to his men and him on patrol and in Manchuria before they were released in Korea. The film proceeds in pseudodocumentary style, with narration that intensifies the realism and the paranoia that this story might not be fiction, that such monstrous conspiracies could actually take place. Events might not really be as we remember them. Our friends might not truly be our friends, but are instead potential assassins awaiting the right moment, the right signal, the “trigger,” to kill us.

In 1962, when the film was released, the American public was saturated with fears about nuclear bombs, the Cold War, international Communism, McCarthyism, and the possibilities of domestic terrorism. Although some Korean veterans had returned with stories of torture and brainwashing, few people had any idea that their own government had endorsed such mind-control projects as MK-ULTRA in which both volunteers and unsuspecting men and women were undergoing experiments with hypnosis, LSD, mescaline, and a host of other mental mechanisms—and perhaps even being programmed to be “Manchurian Candidates.”

Contrary to popular movie folklore, the film was not removed from theatrical distribution after the 1963 assassination of President John F. Kennedy. Theories that Lee Harvey Oswald was inspired to kill JFK after attending a showing of The Manchurian Candidate entered the paranoid legends of the times. Oswald may have been a “Manchurian Candidate” programmed to kill Kennedy, but that’s another matter. In either event, Oswald’s terrible crime did nothing to halt showing of the film. The Manchurian Candidate was telecast on The CBS Thursday Night Movie in September 1965, two years after its theatrical release. It received a second showing that same television season, then was telecast for the third and fourth times on NBC in spring 1974 and summer 1975. A few years later the rights to the film reverted to Frank Sinatra, who made no arrangements for its distribution until 1988, when he rereleased The Manchurian Candidate through MGM/UA.

Feedback
Flashcards & Bookmarks ?
Please log in or register to use Flashcards and Bookmarks. You can also log in with
Flashcards ?
My bookmarks ?
+ Add current page to bookmarks
Mentioned in ?
References in periodicals archive ?
They include 2008's The Reader with Kate Winslet, and 2004's The Manchurian Candidate alongside Denzel Washington.
Downfall's Hitler dies
"I think he may have done something during the election," Nunberg told MSNBC of the president, "but I don't know that for sure." He later told CNN that Mueller "thinks Trump is the Manchurian candidate." A reference drawn from a Cold War novel and film, a "Manchurian candidate" is an American brainwashed or otherwise compromised to work on behalf of an adversarial government.
'Why do I have to do it?'
'The [Armed Forces of the Philippines] should take note that their commander in chief is fast becoming, if he is not yet, the proverbial Manchurian candidate,' she added.
Gatchalian, De Lima weigh in on Duterte's hands-off stance in sea dispute
Dame Angela, 91, will be celebrated for her career spanning seven decades, during which she was nominated for three Oscars - for her first movie Gaslight in 1944, The Picture Of Dorian Gray in 1946 and The Manchurian Candidate in 1962.
Lifetime award for Dame Angela; News people
The director won an Academy Award for The Silence Of The Lambs in 1991, and was responsible for films including Rachel Getting Married, Something Wild and the 2004 remake of The Manchurian Candidate as well as the landmark 1984 concert movie, Stop Making Sense featuring Talking Heads.
Tributes paid to Hollywood film director
Before he was a "Daily Show" correspondent (from 2002 to 2006), or created the world of "Childrens Hospital" (starting in 2008), or took a dip in "Hot Tub Time Machine" (in 2010), Rob Corddry appeared in "The Manchurian Candidate," an Off Broadway production (or, as Corddry remembers it, "more like Way, Way Off Broadway") directed by John Lahr.
My first time in Variety: Rob Corddry
In late August, Clinton campaign manager Robby Mook seemed to suggest that&nbsp;Trump may be a sort of Manchurian candidate: &nbsp;"[There are] real questions being raised about whether Donald Trump himself is just a puppet for the Kremlin in this race," Mook said on ABC.
Russian-American Oil Tycoon Pumps Cash Into The Trump Campaign
He illustrates how the human automaton shows up in science fiction, news coverage, political speeches, and social science articles and books, in propaganda and totalitarian language, from George Orwell's 1984 to the development of the Cold War obrainwashingo scare and the satires of Shock Corridor and The Manchurian Candidate; in postwar literature and politics, such as Ralph Ellison's Invisible Man and the work of Ken Kesey and Betty Friedan; in science fiction through technologies of computation, genetics, and cybernetics related by Kurt Vonnegut, Philip K.
Human Programming: Brainwashing, Automatons, and American Unfreedom
Salman Rushdie, the novelist best known for his highly controversial The Satanic Verses (1988), believes that Donald Trump, the business magnate who became a television personality and who is now seeking the nomination of the Republican Party for the 2016 American presidential election, is a Manchurian Candidate.
Trump a Manchurian Candidate?
Smith Goes to Washington" and "The Manchurian Candidate" comes The Wedge, a novel of political allegory, insight and intrigue.
The Wedge
The enduring result is "The Manchurian Candidate,'' first as a novel, then two movies and now -- an opera.
Cold War-thriller premieres as opera; 'Manchurian Candidate' is staged in Minnesota