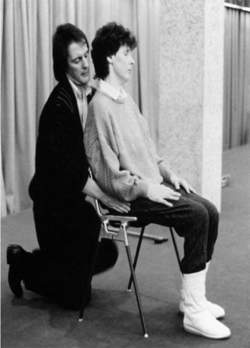 Matthew Manning was born in Devon and grew up in Shelford, Cambridge, England. While still a boy, at the age of puberty Manning caused poltergeist-like phenomena to occur in his home. Objects would move around, untouched by human hands, there were rappings, and writing would appear on the walls and ceilings. Dr. George Owen, a Cambridge psychical researcher and investigator, felt that it was the twelve-year-old boy’s unconscious mind that was causing the phenomena.

Manning was sent off to boarding school and his powers went with him. Heavy iron beds were moved about in the dormitory; bricks, pebbles, knives and glass would appear mysteriously as apports, together with mysterious pools of water. Manning also found that he was able to do automatic writing, which seemed to bring to an end the poltergeist phenomena. The writing would be in English, German, Greek, Italian, Latin, Arabic, and Russian. While still a teenager, he wrote The Link, a book in which he described how he made contact with the spirits of dead poets and painters. He said that he merely sat quietly with pen and paper ready, and concentrated on the artist’s work. He didn’t go into a trance; the pen would start to move and he produced work in the same style as that of the deceased artist. The pen usually started in the center of the page, and eventually filled the paper with what seemed like carefully planned art. The style was invariably and immediately recognizable as that of a particular deceased artist. Usually it was signed by that artist with what appeared to be an authentic signature. Some of the works produced were copies of existing works by the artists, but there were also some new pictures obviously in the style of the artists claiming to be producing them. All of these works were produced in one or two hours, while living artists would take six or more hours to produce such work.

Producing art from dead artists left Manning feeling extremely tired. He said, “No other communicator tires me as much as Picasso does. After only a few minutes, the time it takes him to do one drawing, I feel worn out and cannot continue for at least twenty-four hours.” Pablo Picasso was the first artist who came through Manning starting in 1973, three months after the artist’s death in April of that year. Manning said his hand moved with “excessive force” as he worked. Later artists to use the mediumship of Manning included Paul Klee, Arthur Rackham, Henri Matisse, Leonardo da Vinci, Albrecht Dürer, Monet, Beatrix Potter, and Aubrey Beardsley. Manning said that Picasso was the only communicator who was not confused about using color. According to

Lynn Picknet, “he directed Matthew Manning’s hand to pick out certain felt-tipped pens from a box of mixed colors.” Most of his other communicators utilized pen and ink.

Manning’s spirit guide was named Thomas Penn. Through him, many apports were produced including such unusual items as a loaf of bread thought to be seventy years old, fossils, and an old beeswax candle. After watching uri Geller on television, Manning found he was able to bend spoons and other metal objects, cause alarms to go off, and stop clocks and other machinery. He also developed strong healing abilities and rather than try to “cash in on” his artistic mediumship, has spent many years as a relatively anonymous healer.

Feedback
Flashcards & Bookmarks ?
Please log in or register to use Flashcards and Bookmarks. You can also log in with
Flashcards ?
My bookmarks ?
+ Add current page to bookmarks
Mentioned in ?
References in periodicals archive ?
In a statement issued yesterday afternoon, Deloitte announced that its partners Lee Manning, Matthew David Smith and Neville Kahn had been appointed to oversee the business.
Fresh jobs fears after Blockbuster collapses
Administrators Lee Manning, Matthew David Smith and Neville Kahn of Deloitte took hold of Uxbridge-based Blockbuster Entertainment Limited and Blockbuster GB Limited - which trade as Blockbuster, the DVD and video games rental firm - yesterday afternoon.
Blockbuster move could see 4,000 staff axed
REVVED UP: Lecturer Kam Gill and pupils (from left) Steven Farrell, Daniel Simpson, Dale Manning, Matthew Parkins and Jamie Harding with the go-kart they helped to build.
Building a future in racing