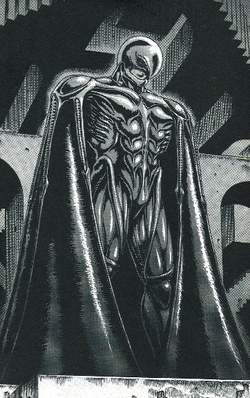 (pop culture)
Griffith was one of the major heroes of Kentaro Miura's popular ongoing medieval fantasy Berzerk (1989–present), but the hand of fate would cast him into the depths of evil, shedding his humanity in the process. First introduced in 1992 in vol. 3 of the manga, Griffith was the handsome and charismatic leader of the mercenary army the Band of the Hawks. Little was known of his past, other than he was a commoner, not of noble birth. An excellent warrior, highly regarded by all, Griffith even recruits the fierce warrior Guts, much to the shock of his men (and Casca, the only women in the Hawks). Over the next several years, the Hawks—now employed by the Kingdom of Midland—become a force to be reckoned with. As the reputation of the Hawks grows, so do Griffith's ambitions for power. Behind the scenes, this calm, unruffled young man orchestrates the deaths of his enemies in the Royal House. But when total power is within his grasp, everything shatters when Guts leaves the Hawks. Things spiral downward quickly for Griffith; one year later, he is locked away in a dungeon. Guts and the remaining Hawks rescue Griffith, but madness has taken their old commander. With the help of a special talisman, Griffith unleashes the Godhand upon the land. This vicious demonic army wipes out the Hawks and transforms Griffith into the being Femto. Only Guts and Casca escape the horror, but not unscathed. Griffith's embrace of the Godhand brought him the power he desired, but the result was the emergence of demons upon the human world, a new dark age. The only challenge to this would come from Griffith's old friend and comrade—now his sworn enemy: Guts, now called the Black Swordsman.