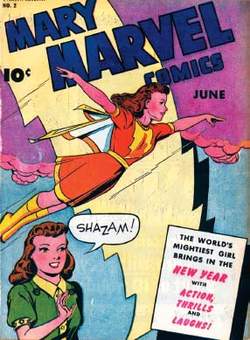 Perhaps fearing that success inevitably inspires imitation, Fawcett Comics seemed to have stolen a march on its competitors by copying its all-conquering Captain Marvel itself. First, they created Captain Marvel Jr., and then in one genre-spanning month in late 1942, they hit both the funny animal market with Marvel Bunny, and the largely untapped female market with Mary Marvel. Writer Otto Binder and artist Marc Swayze introduced Mary in Captain Marvel Adventures #18, in a tale that reveals that Captain Marvel’s young alter ego, Billy Batson, has a long-lost twin sister, Mary (Batson) Bromfield, separated from him at birth and brought up by a wealthy foster family. As luck would have it, Mary is then promptly kidnapped, giving Captain Marvel—senior and junior—ample opportunity to show off their powers by soundly thrashing the kidnappers. Somehow, the miscreants escape, defeat the superheroes, and turn on Mary who, upon uttering a plaintive cry of “SHAZAM!” is magically transformed into the red-mini-skirted Mary Marvel. Like her brother, the superpowered Mary can fly and is possessed of almost unlimited strength, and so she makes short work of dispatching her captors.

Fawcett was never overly concerned with explanations for its heroes’ powers, and readers had to be satisfied with the ubiquitous, long-bearded wizard Shazam popping up to say that this was simply what was meant to happen. In any case, logical or not, the three heroes pledge to fight crime together, and the following month Mary graduated into her own feature in Wow Comics #9, displacing the bizarrely named Mr. Scarlet and Pinky from the cover spot. Swayze was deemed too important to draw a new feature such as Mary’s and was returned to the Captain Marvel feature, leaving the new strip to be drawn by Jack Binder, brother of the strip’s principal writer Otto; this made them one of the few brother teams in comics history.

Unlike Billy Batson, who was transformed into a muscular adult, his sister Mary was still only a young girl after uttering the magic words, possibly in an attempt to appeal to a young readership. Indeed, for Mary, Otto Binder deliberately downplayed the heroics typical of the other Fawcett comics, preferring instead more human-interest stories. (In fact, unlike her contemporary, Wonder Woman, Mary was very much unliberated, content to be helping out her male family members.) However, Mary did have her share of villains, including Georgia Sivana (from the ever-increasing Sivana family of mad scientists), Mr. Night, and Nightowl; but she was just as likely to spend her time frolicking with gnomes or rescuing lost puppies. In addition to her wealthy foster parents, the supporting cast included hayseed best pal, Freckles, who occasionally donned a costume to become (wait for it) Freckles Marvel, and whose main purpose was to be rescued. Another costumed cohort was Uncle Marvel, a con man who persuaded Mary to sell her heroic services for cash, but soon reformed to become a general nuisance in many later strips of all the Fawcett characters. Mary regularly teamed up with Captain Marvel and their friend Freddy Freeman, who became Captain Marvel Jr., as the “Marvel Family” of superheroes.

Sales were strong enough during World War II to warrant Mary’s own title, and Mary Marvel #1 appeared in 1945, while a line of Mary Marvel dresses sold in the thousands. The next year saw the launch of the Mary Marvel fan club, but sales soon started to slump (possibly as the result of a maturing audience switching over to romance titles), and in 1947 Wow became a Western comic. Barely one month later, Mary’s own title was transformed into Monte Hale Western and she had to make do with a berth in Marvel Family, until the 1950s superhero slump killed that off in 1954.

By the time of her initial demise, Mary had become a teenager, and when she was revived by DC Comics—some thirty years later—she was still a teenager. As part of the Shazam! title, Mary starred in occasional Marvel Family adventures, as well as a few solo backups. In these tales, usually featuring Mary surrounded by a gang of teenage girlfriends, she was portrayed as a would-be Nancy Drew, solving quirky mysteries— and with beautiful art by Bob Oksner she never looked better. Captain Marvel went on to become a regular fixture in the DC lineup, but for much of the 1980s and 1990s Mary languished in obscurity. For a readership lacking in young girls it would seem that there is now no audience for the innocence and simplicity of Mary Marvel.

Indeed, in the series Countdown to Final Crisis (2007–2008) and Final Crisis (2008–2009), Mary is corrupted and falls under the mental control of the evil New God Desaad. She turns evil and even attacks Wonder Woman. Freddy Freeman, who has become the new Captain Marvel, uses magic to transform her back to her non-superpowered form. No longer mentally possessed by Desaad, Mary is horrified by what she had become. But when she later reverts back to her evil, superpowered form, Shazam removes her superpowers.

Mary Marvel also appears in the 2007 limited series Shazam!: The Monster Society of Evil, which presents an alternate, child-friendly version of the Captain Marvel mythos. Mary Marvel first appeared in animation in the Shazam! television series. She appeared as Mary Batson in a 2010 episode of Batman: The Brave and the Bold, and returned as the superpowered Mary Marvel, and part of the Marvel Family, in the 2011 episode “The Malicious Mr. Mind!” —DAR & PS

Feedback
Flashcards & Bookmarks ?
Please log in or register to use Flashcards and Bookmarks. You can also log in with
Flashcards ?
My bookmarks ?
+ Add current page to bookmarks
Mentioned in ?
References in periodicals archive ?
|Darren Bowman and Haley Kurton as Shazam and Mary Marvel
Scouse superheroes dress to impress
In the comics, Mary became one of the first major superheroines, Mary Marvel.
Shazam! UK release date, cast, trailer, Dwayne Johnson spin-off; Shazam! is blasting his way into UK cinemas and here is the release date, cast and trailers information you need
Greg Cox's COUNTDOWN (9780441017188, $15.00) is based on the DC Comics series and provides a cast of comic book figures, from Jimmy Olsen and Mary Marvel to Jason Todd and ex-superheroes forced to retire and rejoin humanity--until all the superheroes are called upon to save the world.
Ace Books