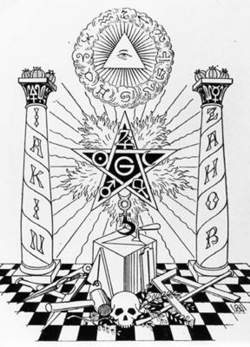 What is Freemasonry? Who are the Masons? What goes on in the Masonic Lodge downtown? Is it a religion?

The answer to these questions depends entirely on whom you ask.

To some, Freemasonry is an ancient cult still going about the business of establishing a new world order. Log on to any Internet search engine and before you even get to an official Masonic Order website, you will discover page after page of essays that supposedly "expose" Freemasonry. According to the majority of Internet sites (sponsored mostly by conservative Christian groups), Masons continue the tradition and mission of the Kabbalah, Gnosticism, Rosicrucianism, and the Illuminati. They are the secret organization that is out to take control of your life. They always have been and always will be. They have duped their many members, who do not see the truth behind the Master Plan, and they have made many inroads. Does not the Great Seal of the United States of America, the one printed on the dollar bill in your wallet, consist of Masonic signs only Masons understand? Were not George Washington, Thomas Jefferson, Benjamin Franklin, and Paul Revere Masons? Even former U.S. president Gerald Ford, for heaven's sake. For many years it's been a not-too-well-kept secret that Mozart's opera The Magic Flute is based on Masonic symbolism. That must prove something! A cult that old must be involved in secrets the rest of us don't know anything about.

But talk to a Mason or attend a public night held at the Masonic Lodge and you will get quite a different story. Freemasonry, along with its orders of the Knight's Templar and DeMolay for men and boys, and the orders of Eastern Star and Rainbow Girls for women and girls, is the oldest fraternity in the world. It exists to make the world a better place. It fosters goodwill and good work. It builds hospitals and finances community projects. There are secrets, of course. All fraternities have rituals, handshakes, and emblems known only to members. Yes, a lot of very famous men have belonged, but that can be seen as proof that the organization is worth joining.

During a dark time in American Masonic history, in the early nineteenth century, the movement was discredited and ridiculed. In November of 1826, after a member threatened to reveal the order's secrets, he was kidnapped and murdered by fellow Masons. After a very public trial, thousands left the order. But that was then. This is now. And the movement certainly has recovered from a time that was not at all representative of the men who now meet at the lodge once a week.

No one knows when Masonry really began. Some trace it all the way back to ancient Persia and Egypt and the building of the ziggurats and pyramids. Others say it began with the building of Solomon's Temple about three thousand years ago. Whatever the case, it certainly has a long and illustrious history. The modern Masonic Lodge is often called a temple because it is built following the pattern of Solomon's Temple in Jerusalem and much of its ritual comes from those verses of the Bible that describe the construction.

The Masonic Knight's Templar trace their roots back to nine French knights who vowed to protect those who were on their way to the Crusades. They played an integral part in many battles during those times, earning a reputation for bravery. There are those who believe it was the Knights Templar who brought the Shroud of Turin, thought to be the burial shroud of Jesus, back to Europe and protected it down through the centuries. Some believe they had a part in the spiriting away of the Ark of the Covenant upon its disappearance (see Ark of the Covenant).

The first Masonic Grand Lodge was built in London in 1717. The order entered America through Boston in the eighteenth century. Many of America's founding fathers were Masons, and there is no question that many Masonic symbols found their way into the Great Seal and other national emblems.

The answer to the simple question, "Is Masonry a religion?" is not really straightforward. Masonry is not a religion. But Masons are religious. Although they will never try to convert anyone or change anyone's religion (by rule, it is forbidden), one has to believe in God in order to join the order. Meetings begin with prayer. Much of the ritual comes from the Old Testament of the Bible. Many Masons attend church on Sundays. Some of them nowadays may attend a synagogue.

If you attend a Masonic Lodge in your town during one of their open meetings, you will certainly not find a group of secret conspirators out to take over the world. You will find an order that is dwindling, probably due more to cultural patterns of modern lifestyle than anything else, a group of people who genuinely enjoy the company of others while engaged in the task of doing good things for the community and participating in a tradition with a long history.

Feedback
Flashcards & Bookmarks ?
Please log in or register to use Flashcards and Bookmarks. You can also log in with
Flashcards ?
My bookmarks ?
+ Add current page to bookmarks
Mentioned in ?
References in classic literature ?
"Yes, you do not know Him, my dear sir," said the Mason. "You cannot know Him.
You do not know Him, but He is here, He is in me, He is in my words, He is in thee, and even in those blasphemous words thou hast just uttered!" pronounced the Mason in a stern and tremulous voice.
View in context
The mason, after hesitating a long time between two-pounds-ten and five pounds, was emboldened by a fellow-workman, who treated him to some hot whiskey and water, to name the larger sum.
When the mason attempted to return to his ordinary work he was informed that he had contravened trade usage, and that his former employers would have nothing more to say to him.
View in context
"It don't sound right, Miss Mason. It just don't sound right.
"You like reading, Miss Mason?" he said, laying the book down.
View in context
Mason's MS.] This morning we had again some little trouble with the rod of the propeller, which must be entirely remodelled, for fear of serious accident - I mean the steel rod - not the vanes.
View in context
White Mason, whether you examined the farther side of the moat at once to see if there were any signs of the man having climbed out from the water?"
White Mason, to our going down to the house at once?
View in context
Mason stood near the fire, talking to Colonel and Mrs.
View in context
"And six wooden goblets, and six platters of wood and two of pewter to cat and drink from withal," said the mason, impressively.
View in context
"God bless them!" said Vergniaud, the sergeant, to the mason, when they reached the church porch.
View in context