(məsā`də), ancient mountaintop fortress in Israel, the final outpost of the Zealot Jews in their rebellion against Roman authority (A.D. 66–73). Located in the Judaean Desert, the fortress sits atop a mesa-shaped rock that towers some 1,300 ft (400 m) above the western shore of the Dead Sea. According to the ancient historian Josephus, Masada was first fortified sometime during the 1st or 2d cent. B.C. Between 37 and 31 B.C. Herod the Great, king of Judaea, further strengthened Masada, building two ornate palaces, a bathhouse, aqueducts, and surrounding siege walls. In A.D. 66, with the outbreak of the Jewish war against Rome, the ZealotsZealots
, Jewish faction traced back to the revolt of the Maccabees (2d cent. B.C.). The name was first recorded by the Jewish historian Josephus as a designation for the Jewish resistance fighters of the war of A.D. 66–73.
..... Click the link for more information. , an extremist Jewish sect, seized the fortress in a surprise attack and massacred its Roman garrison. Masada remained under Zealot control until A.D. 73, when, after a siege, the 15,000 soldiers of Rome's tenth legion finally subdued the 1,000 men, women, and children holding the fortress. In a final act of defiance, however, almost all of the Jewish defenders had killed themselves rather than be captured and enslaved by the Romans. Only two women and five children survived to tell of the Zealots' last action. Most archaeologists believe the siege lasted several months, although some have suggested it may have taken only a few weeks. Excavated (1963–65) by Yigael Yadin and an international team of volunteer archaeologists, Masada is now a major tourist site and an Israeli historical shrine. Large-scale archaeological excavations were also conducted at the site in the 1950s. 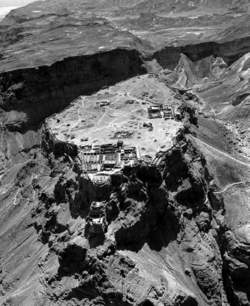 Built by King Herod, Masada became best known as a stronghold for Jewish rebels against the Roman Empire in the first century CE. Today it remains a powerful historic symbol for the Israeli people. Getty Images.

Masada, initially built by Israeli King Herod the Great (37–4 BCE) as a summer resort, became a site of Jewish martyrdom in the first century CE and, in the post-Holocaust world, a site celebrated by Jews worldwide. The site sits on a hill with steep sides overlooking the Dead Sea, and while it was built in the luxury befitting a king, the location was also chosen with its possible role as a defensive fort and a place of haven from enemies. At one point, when Parthians invaded his land, Herod sent the females of his family to Masada, where they were protected until the danger passed.

Masada is not remembered today because of Herod, however, but because of events three-quarters of a century after he passed from the scene. In 66 CE, Jewish rebels opposed to the Roman rule of Palestine captured Masada and turned it into a mountain stronghold. These Zealots awaited a Messiah who, unlike the Christian messiah, would assume rule over Israel and thus replace the contemporary Roman authorities. Capturing Masada was but one step in a war to drive the Romans out. The war failed, and in the end, Masada became the last bit of land controlled by the rebel forces.

Given its isolated location and the problem of actually laying siege to it, the Romans waited until 74 CE to remove this final challenge to their authority. The rebels did not give up easily, and only after an effort that lasted more than a year did the mountain fall. However, when the Romans finally entered the fortress, they discovered that all of the rebels had committed suicide. Prior to their death, they also destroyed anything of value, leaving nothing for the soldiers to loot. The 960 defenders of the fort had held off an army of 10,000; only two women and five children survived the final attack.

Masada has become a symbol of courage for Israelis, and one eagerly grasped after the founding of the nation of Israel. In recent decades, the Israeli army has regularly brought new recruits to Masada as part of their swearing-in ceremony.

Visitors to the site today may see Herod’s palace, with its notable mosaics, the baths reminiscent of the conquering Romans, and a synagogue. After the fall of the fort, the site was uninhabited for many centuries, until a group of Benedictines erected a small monastery. They are no longer there.

Of more than passing note: The only contemporaneous source of information about the events at Masada are found in The Jewish War, written by historian Flavius Josephus (37-c. 100ce).

Pearlman, Moshe. The Zealots of Masada: Story of a Dig. New York: Charles Scribner’s Sons 1967.
Wasserstein, Abraham, ed. Flavius Josephus: Selections from His Works. New York: The Viking Press, 1974.
Yadin, Yigael, and Gerald Gottlieb. The Story of Masada. New York: Random House, 1969.
The Encyclopedia of Religious Phenomena © 2008 Visible Ink Press®. All rights reserved.
The following article is from The Great Soviet Encyclopedia (1979). It might be outdated or ideologically biased.

an ancient Judean fortress near the southern shore of the Dead Sea.

Masada was founded in the late second century B.C. Under Herod I (73-04 B.C.) a palace complex and additional fortifications were built. In the Judean War of A.D. 66-73, Masada was the last strongpoint of the rebels. Excavations conducted in Masada in 1963-65 unearthed many objects, including Roman and Judean coins, ostraca, papyruses and inscriptions on leather containing economic records, and letters, as well as religious literary texts in ancient Hebrew, Aramaic, and Greek.

an ancient mountaintop fortress in Israel, 400 m (1300 ft.) above the W shore of the Dead Sea: the last Jewish stronghold during a revolt in Judaea (66--73 ad). Besieged by the Romans for a year, almost all of the inhabitants killed themselves rather than surrender. The site is an Israeli national monument
Collins Discovery Encyclopedia, 1st edition © HarperCollins Publishers 2005

Feedback
Flashcards & Bookmarks ?
Please log in or register to use Flashcards and Bookmarks. You can also log in with
Flashcards ?
My bookmarks ?
+ Add current page to bookmarks
Mentioned in ?
References in periodicals archive ?
Massada, who taught her during the e-textiles summer school class and during the previous school year noted, "She is so tough.
Equitable Engagement in STEM: Using E-textiles to Challenge the Positioning of Non-dominant Girls in School Science
Agnon, "Prehistoric earthquake deformations near Massada, dead sea graben," Geology, vol.
Soft-sediment deformation structures interpreted as seismites in the Kolankaya formation, Denizli basin (SW Turkey)
Massada, Essential Oils by Gas Chromatography and Mass Spectrometry, 1976.
Exploring the anti-Burkholderia cepacia complex activity of essential oils: a preliminary analysis
(5.) Reuben Alcalay, The Complete Hebrew-English Dictionary (Ramat-Gan-Jerusalem: Massada Publishing Co., 1970).col.
The root g-r-ain the bible: the case of the daughters of Zelophehad and beyond
Still, although Jafari's deputy, Brigadier General Hossein Salami, boasted that Iran would "crush" its arch-foes by hitting "enemy bases in the region," elementary military logic ought to consider that Israelis practice the Massada Complex--named after the location near the Dead Sea where 960 Jews committed suicide in the first century rather than surrender to the Romans and acquiesce to the loss of independent statehood--which nearly guarantees an Israeli use of nuclear weapons.
No Third World War on horizon
Authors: A Pereira, M Massada, R Sousa & R Lemos
Metastatic carcinoma as an unusual cause of failure in total hip arthroplasty
O intento da obra foi investigar a historia dos judeus da Palestina desde os tempos do rei seleucida Antioco IV Epifanes ate a queda de Massada. De todos os livros que compoem a obra, os cincos ultimos tratam diretamente dos anos da guerra, com dois deles especificos ao cerco de Jerusalem.
The tears and the historian: a reading of The Jewish War/ As lagrimas e o historiador: uma leitura de Guerra Judaica
Les Fazzani 6 m Intikhab - Massada Dr Marwan Koukash 81341-2 RPR 109 She proved herself to be a useful filly in the second half of last season, when she won a Listed race at Kempton and was narrowly beaten in a Group 1 in Rome, where the ground had dried out and wasn't ideal.
An interesting mix of quality and quantity at Hambleton; STABLE TOUR
As recounted in Flavius Josephus's History of the Jewish Wars or Bellurn Judaicurn (75 CE), the Roman suppression of the Jewish revolt in 66 CE culminated in the tragic destruction of the Temple in 70 CE, and the siege of Massada three years later.
Exile and restoration in John Crowne's The Destruction of Jerusalem by Titus Vespasian
(5.) Hillel Barzel, Meta-realistic Hebrew Prose, Massada Press, Ltd.
Artist and magician: Marc Chagall and Isaac Bashevis-Singer
(21) In the extended version of the mythical narrative, which ties modern episodes to Antiquity (the destruction of the Second Temple, the revolt of Bar Kochba and the battle of Massada), this chain makes it possible to legitimate the idea of a national and territorial identity that go back a millennium, in which the diaspora represents little more than a "non-history" or a tragic parenthesis prior to reconquest.
"God will not remain silent": Zionism, messianism and nationalism