Various problems and exercises of a diversionary nature that require resourcefulness, keenness of wit, originality of thought, and the ability to critically assess conditions or formulate the problem are usually called mathematical diversions. These include puzzles, problems involving changing one figure into another by cutting and transposition of parts, tricks based on computations, and mathematical games. Mathematical games include games that have to do with numbers, figures, and the like or those whose result can be predetermined by a preliminary theoretical analysis. With the development of mathematical game theory, the term “mathematical games” (in the sense of this article) is being used increasingly less. Below are two examples of games.

Example 1. Two players in turn draw no more than m (for example, five) articles from a pile containing n (for example, 35) articles. The one who draws the last articles is the winner. A result of game theory asserts that if n is not divisible by m 1, then the first player will necessarily win if he leaves his opponent after each turn a number of articles that is a multiple of m + 1 (in the example, a multiple of 6).

One such diversion is that of “forming parquets”; it consists in filling a plane with regularly alternating figures of the same type, (for example, with similar regular polygons) or with several given types of figures. If a “two-color square parquet” with axes of symmetry A′A and B′B (Figure 2) consists of 4n2 equal squares, each of which is divided by a diagonal into a white and a black half, then the number of different parquets is 4n2 (this number grows rapidly with increasing n).

Among the diversions that have a very large, not yet exactly determined, number of solutions is Euler’s knight problem, which consists in moving a knight on a chessboard so that each square is traversed just once. Another such diversion is the problem of constructing multicelled magic squares. In such problems we usually wish to determine the number of solutions and develop methods that at once yield large groups of solutions. The mathematical content of a number of other mathematical diversions and games lies in determining the least number of operations required for achieving a stated objective. Such diversions include “ferry” and “arrangement” problems or games similar to the Hanoi Tower game, which consists in calculating the least number of steps necessary to transfer the disks from peg A (Figure 3) to peg C using peg B subject to the restriction that only one disc may be transferred at one time from any one peg to any other and that no larger disk may be placed above a smaller one. 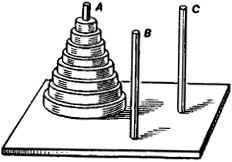