the velocity (or momentum) distribution of the molecules of a system in thermodynamic equilibrium. It was established by J. C. Maxwell in 1859. According to the Maxwellian distribution, the probability Δw(vx, vy, vz) that the components of the velocity of a molecule lie in the small ranges between vx and vx + Δvx, vy and vy + Δvy, vz; and vz + Δvz is given by the formula

where m is the mass of the molecule, T is the absolute temperature of the system, and k is Boltzmann’s constant.

This probability reaches a maximum when

By using the Maxwellian distribution it is possible to calculate 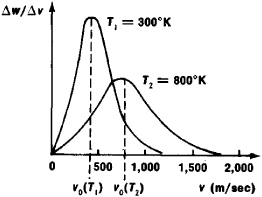 Figure 1. Distribution over velocities v of nitrogen atoms at absolute temperatures T1, and T2; ΔW/ΔV is ratio of probability that absolute value of velocity lies between v and v + Δv to the velocity interval Δv

exceeds by a factor of

the most probable molecular velocity. For example, for nitrogen when

The Maxwellian distribution has been confirmed in experiments with molecular beams.

Feedback
Flashcards & Bookmarks ?
Please log in or register to use Flashcards and Bookmarks. You can also log in with
Flashcards ?
My bookmarks ?
+ Add current page to bookmarks
TheFreeDictionary presents:
Write what you mean clearly and correctly.
Mentioned in ?
References in periodicals archive ?
PMD analyses in different climatic regions have exhibited varied Maxwellian Distribution Functions (PDF).
Impact of Temperature and Relative Humidity on PMD in Directly Buried Optical Fibre Cables in Semi-Arid and Tropical Highlands in Kenya
The slow solar wind moves at less than half the speed of the fast wind; it is much denser, has a lower temperature (as measured by its Maxwellian distribution), and is much more variable.
UNDERSTANDING SPACE WEATHER: Part III: The Sun's Domain: The solar wind is a continuous, varying outflow of high-temperature plasma, traveling at hundreds of kilometers per second and stretching to over 100 au from the Sun
The symmetric part of the expansion in (2), [f.sub.0], is a Maxwellian distribution function given by
Nondestructive measurement of momentum transfer collision frequency for low temperature combustion plasma
The equilibrium distribution function [f.sub.i.sup.eq] is derived from the Maxwellian distribution function by applying the Taylor series expansion or other interpolation techniques.
Numerical simulation of flows in beadless disperser by finite difference lattice Boltzmann method
The m = 3 supermirror guide [7] enhances the total neutron flux in the desired energy range 0 meV to 15 meV with respect to the Maxwellian distribution of neutrons emerging from the moderator.
Measurement of parity violation in np capture: the NPDGamma experiment