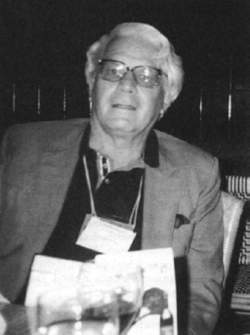 Raymond T. McNally, a leading historian and scholar on vampires in folklore and fiction and expert on Vlad the Impaler—the historical Dracula—was born on May 15, 1931, in Cleveland, Ohio, the son of Marie Kinkoff and Michael Joseph McNally. After completing his education, McNally took a position as instructor at John Carroll University in his hometown. He moved on to Boston College in Chestnut Hill, Massachusetts, in 1958. In 1961 he was named an American Exchange Scholar to the USSR and spent the year at the University of Leningrad. From 1964 to 1974 he also served as director of Boston College’s Slavic and East European Center. He was appointed full professor in 1970.

After joining the faculty at Boston College he met Radu R. Florescu, a Romanian historian with whom he shared an interest in Dracula and vampire lore.

They formed a team to do research on the historical Dracula, a fifteenth-century ruler named Vlad the Impaler, and his relationship to the novel by Bram Stoker. In 1967 McNally was one of a party of men who discovered and explored the authentic Castle Dracula. His continued collaboration with Florescu proved fruitful, its first product being In Search of Dracula (1972), one of the early nonfiction works on Dracula and the first to offer details about the obscure Vlad the Impaler. It became a popular bestseller. The following year, they completed a more scholarly biography, Dracula: A Biography of Vlad the Impaler, 1431–1476. These books have become two of the most influential works for people interested in vampires. Christopher Lee, the actor most identified at the time with the dramatic role of Dracula, starred in a documentary film based on the two books, In Search of Dracula (1976), made by a Swedish film company. Later books and movies have incorporated data from the two volumes as part of the Dracula storyline.

McNally followed the success of the two volumes with an anthology of vampire writings (both fiction and nonfiction), A Clutch of Vampires: These Being among the Best from History and Literature (1974). Through the 1970s he continued to work with Florescu, and in 1979 they completed a new edition of Stoker’s novel, The Essential Dracula: A Completely Illustrated and Annotated Edition of Bram Stoker’s Classic Novel. Meanwhile, McNally had also become fascinated with Elizabeth Bathory, the other historical personage who stood behind the Dracula myth. Bathory, a Czechoslovakian countess, was (like Vlad) not a vampire, but she did kill many young girls and it was said that she would bathe in their blood, a practice she thought would preserve her youth. Dracula Was a Woman: In Search of the Blood Countess of Transylvania appeared in 1983. Two decades of work on the historical Dracula led to the publication of Dracula, Prince of Many Faces: His Life and Times (1989), a comprehensive attempt to put the life story of Vlad the Impaler into the broad context of fifteenth-century European history.

In the early 1970s, while researching and writing their first books, McNally and Florescu had suggested some collaborative work between British, Romanian, and American scholars interested in Vlad and Dracula. The fall of the Romanian dictatorship in 1990 has allowed such an endeavor to proceed. The first product was an edited volume, Dracula: Essays on the Life and Times of Vlad Tepes, to which McNally contributed an essay, “An Historical Appraisal of the Image of Vlad Tepes in Contemporary Romanian Folklore.” McNally continued as a leading figure in the field through the 1990s. A new addition of his landmark volume coauthored with Radu Florescu, In Search of Dracula was released in 1994. He was a presenter at both the World Dracula Conference in Romania in 1995 and at Dracula ‘97: A Centennial Celebration in Los Angeles, at which the Transylvanian Society of Dracula gave him an award for his historical scholarship. He was an active member of the Lord Ruthven Assembly, and was named one of its honorary presidents. In 1997 he completed a new annotated version of Dracula on CD, Dracula: Truth and Terror.

During the last decade of his life, McNally received the accolades of his colleagues for his work in putting the study of Dracula on the academic agenda, while at the same time there was a growing critique of his early work that suggested that he had significantly overstated the case for identifying Count Dracula with Prince Vlad Dracula, as well as over emphasizing the role of Elizabeth Bathory on Bram Stoker and the writing of Dracula. Most recently, Dracula scholars Robert Eighteen-Bisang and Elizabeth Miller praised McNally for his role in making Stoker’s notes on Dracula, long hidden away in the Rosenbach Museum and Library in Philadelphia, known to the world of Dracula scholars; at the same time, they criticizedhim for his role in spreading the false impression that Vlad was the model for Count Dracula.

During his many years at Boston College, McNally founded and headed the school’s Russian and East European Center (1964). In 1995, he joined with his colleague Donald Carlisle, in founding the Balkan Studies Institute, also based at Boston College.