(ĕmā`, məkfûr`sən), 1890–1944, U.S. evangelist, founder of the International Church of the Foursquare Gospel, and, in the 1920s and 30s, one of the most famous women in America, b. near Ingersoll, Ont. Born Aimee Elizabeth Kennedy, she was converted to Pentecostalism as a young girl and married a preacher, Robert Semple. The couple went as missionaries to China, and when he died a year later, she returned to the United States. Not long afterward she married Harold McPherson, but she left him in 1915 to take up a life of itinerant preaching, holding revival meetings along the Atlantic coast. With her mother, Minnie Kennedy, as business manager, she went to Los Angeles in 1918. There she became phenomenally successful and was noted for her healing sessions. In 1923, she opened Angelus Temple in Los Angeles and began to preach the foursquare gospel (see Foursquare Gospel, International Church of theFoursquare Gospel, International Church of the,
fundamentalist Christian Church and evangelistic missionary body organized in California by Aimee Semple McPherson and Minnie Kennedy in 1927.
..... Click the link for more information. ) at the temple, in an evangelical newspaper, and on her own radio station. Her disappearance in May, 1926, while swimming in the Pacific, and then reappearance in June with a bizarre tale of kidnapping caused a huge uproar that resulted in a trial for fraud. Although she was acquitted, her business activities as head of Angelus Temple resulted in numerous other legal actions. She died as a result of an allegedly accidental overdose of sleeping pills. 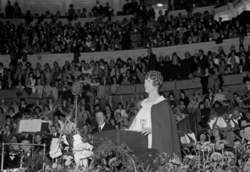 Pentecostal healer Aimee Semple McPherson, shown here in 1928, was a dynamic public speaker who built a large following of believers in the 1920s and 1930s. Getty Images.

Aimee Semple McPherson, a famous Pentecostal healer and early female preacher, was born on October 9, 1890, in Ingersoll, Ontario, Canada. During her formative years, her mother was a member of the Salvation Army, which promoted females in the ministry, but when Aimee found doubts arising on her Christian belief, she turned to a Pentecostal minister, Robert Semple. She married him in 1908 and the two left for a missionary life in China. Shortly after their arrival in Hong Kong, however, he died and left her the mother of a newborn child.

Back in the United States, with the assistance of her mother, Aimee began the life of an independent traveling evangelist. Toward the end of World War I, she moved to California. She was becoming famous for her preaching, and healing became an important part of her services. Her reputation was greatly enhanced in 1921 when a woman confined to a wheelchair stood up and began to walk.

In 1923 she dedicated the Angelus Temple in Los Angeles. It remained her base of operations for the rest of her life. The largest church along the West Coast at the time, it seated 5,000 and was dominated by a cross that was visible from many miles away. In 1924 she bought a radio station and began one of the pioneering broadcast ministries. The temple also became home to a number of crutches and other implements left behind by those who were healed by Sister Aimee.

In 1925 she opened LIFE Bible College for the training of future ministers and missionaries. She launched her own “Salvation Navy,” the Church of the Foursquare Gospel. Ministers she trained moved out to found lighthouses, as local congregations were called.

While she was already a celebrity, McPherson’s fame (or infamy) was greatly increased by an event in the spring of 1926. On May 18, 1926, she went swimming in the Pacific Ocean and disappeared. After unsuccessful searches, many concluded that she had been swept out to sea and was dead. Thirty-two days later, she reappeared in Agua Prieta, Mexico. She claimed she had been kidnapped and taken out of the country. Many believed her, but others doubted the story. Some noted that the engineer at the radio station, Kenneth G. Ormiston, had also disappeared during this time. Some speculated the two were having an affair. However, 50,000 believers gathered on June 23 to welcome her back to the Angelus Temple. Evidence of the reputed affair was never conclusive, and a formal investigation of the whole matter finally dwindled away.

She continued to hold forth at the Angelus Temple through the 1930s. As the Depression rolled through the state, she organized various relief efforts. She continued to travel, frequently overseas. When she died September 27, 1944, she left behind a thriving denomination with a growing global presence.

(1890–1944) evangelist; born near Ingersoll, Ontario, Canada. Daughter of a Salvation Army soldier, she married a Pentacostal missionary and was widowed in China in 1910. She returned to North America with her daughter and set out on a career as an evangelist, offering a fundamentalist message of hope and salvation that brought in enormous money contributions over the course of some 25 years. She married and divorced, married and divorced again. Often accompanied by her mother, she traveled around the U.S.A. to conduct her revival meetings. Flamboyant and innovative, she expanded her Los Angeles-based (after 1918) evangelical empire by adding a radio station, a Bible school, and a magazine. She was often accused of improprieties, but nothing was ever proved. She died in Oakland, Calif., of an overdose of sleeping powders.
The Cambridge Dictionary of American Biography, by John S. Bowman. Copyright © Cambridge University Press 1995. Reproduced with permission.