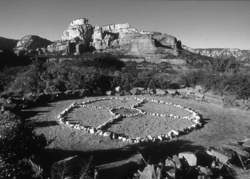 Medicine wheel in Sedona, Arizona. A Native American symbol, the wheel is a circle of stones with four spokes and a center. The outer circle is made up of sixteen stones, one for each of the twelve moons and one for each of the four spirit keepers, while the center represents the Great Spirit. Fortean Picture Library.

Scattered throughout the plains of western Canada and the United States are hundreds of prehistoric medicine wheels, circles of stones that seem to be aligned in patterns designed to represent astronomical sighting plains. When Europeans first discovered them, they naturally asked the Indians who built them. The answer was always the same: "The people who were here before." In other words, these were old— very old. They were considered sacred, protected by the spirits, and the destination of many a vision quest.

They remain so today. Many still travel to sit quietly, meditating on the circles which, by their very antiquity, provoke feelings of awe and wonder. Who built them? How were they used? And why are they here?

The pattern is not unique to America. Stone circles are found throughout the world, from Stonehenge, the "granddaddy" of them all, to the small, mountaintop circles of the American high desert that are known only to a few initiates.

The circle or sacred spiral pattern is also found consistently throughout the world's record of rock paintings. What does it mean? The standard theory is that astronomy figured heavily in its use. It is the common denominator in astrological alignments. Some speculate that the pattern is representative of the womb. But beyond that there seems to exist a spiritual component lost to modern humans. The best we can do is guess.

The question remains concerning the universality of the designs. Some consider it coincidence, believing the pattern represents a religious feeling we all must have in common. Whether we live in Siberia or Arizona, we all share the same human psychology. Others believe the design originated in one location and then spread throughout the world. This is the "diffusion" theory.

Feedback
Flashcards & Bookmarks ?
Please log in or register to use Flashcards and Bookmarks. You can also log in with
Flashcards ?
My bookmarks ?
+ Add current page to bookmarks
Mentioned in ?
References in periodicals archive ?
The healing was accomplished through prayer, smudging, pipe ceremonies, sweat lodge ceremonies and medicine wheel teachings.
Native spirituality: the making of a new religion
O'Grady, an archaeologist with the university's archaeology field school, has been using aerial photography to document the medicine wheels, which are large circular stone formations, sometimes with spokes radiating from the center.
ART NOTES
A recent trip to Arkansas revealed a treasure trove of discoveries--Three Sisters Stew, blue comfrey, Red Hat Clubs, and, most fascinating to me, the medicine wheel garden.
Circle of life: a tranquil medicine wheel garden is inspired by centuries of Native American tradition
Labyrinths, ancient structures that predate Christianity, are simply winding patterns of concentric circles, for example, Hopi Medicine Wheels, Celtic labyrinths, etc.
Walking the Labyrinth to Peace
I have divided these concepts into four circles noting that all four circles intersect, The first circle speaks to the spiritual and cultural understanding of American Indian wellness and health based on Ottawa, Eastern Cherokee, and Ojibwa medicine wheels and supported by Antonovsky's (1979) salutogenic theory; the second circle frames alcoholism within the context of the colonization experience for Native Americans, integrating the spiritual work of Napoleon (1991) and theoretical framework of Antonovsky.
American Indian perspectives on addition and recovery
I have walked the battlefields, Old settlements, mounds, medicine wheels, Trying to find some trace in the ruins, Trying to catch some signal That will help me understand, That will tell me what to do.
Flight
The rangers are upset by the thousands of New Agers who have been appearing at the 2.8-million-acre forest each summer and moving rocks around to form giant medicine wheels. Describing the wheels as focal points for prayer, the New Agers have built creations as big as 200 feet in diameter.
"Destructive recreation" on our public forests
This is particularly important to people who, like the aforementioned Crow Indians, live in a northern climate: It tells them when to get out their furs and woolies, and it seems to have been the purpose of the medicine wheels they made.
The old and the ethnic in astronomy
Pat O'Grady, staff archaeologist with the University of Oregon's Museum of Natural and Cultural History, beams when he talks about two Native American "medicine wheels" that a fellow archaeologist literally stumbled upon five years ago in Southeastern Oregon, near Burns.
Oregon discovery turns back the wheels of time
Born in Fort Nelson, B.C., the 28-year-old Eh Cho Dene woman said she wasn't raised in her culture, but was introduced to the power of herbs, songs, dreams, ceremonies and medicine wheels for healing, when she participated in a 13-part documentary for Vision TV called Medicine Woman.
Daniele Behn
These circles are collectively termed "Medicine Wheels." While there may be better terms for these symbols and structures, "Medicine Wheel" is the one we commonly use at this time.
Medicine wheels: the cycles of life: Arthur C. Horn, Ph.D., connects us with this ancient tradition
Authoritative and beautifully illustrated, it includes data on medicine wheels, human effigy figures, cairns, tipi rings, ribstones, and other rock formations.
Stone by Stone: Exploring Ancient Sites on the Canadian Plains