town (2010 est. pop. 4,000), Herzegovina region, Bosnia and Herzegovina, about 16 mi (25 km) SW of Mostar. In 1981 six children claimed to have seen visions of the Virgin Mary there, which was then part of Yugoslavia; some say they still experience the apparitions. Medjugorje has since become a pilgrimage site for many Catholics, though the Vatican has yet to issue an opinion on the apparitions.
The Columbia Electronic Encyclopedia™ Copyright © 2013, Columbia University Press. Licensed from Columbia University Press. All rights reserved. www.cc.columbia.edu/cu/cup/ 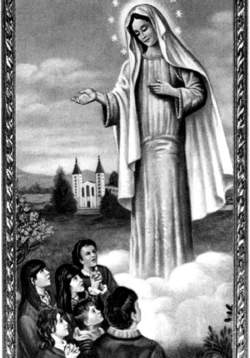 Six children purportedly had visions of the Virgin Mary in 1981 in the Roman Catholic enclave of Medjugorje in Bosnia-Herzegovina. Occuring in a largely Muslim area, the apparitions reportedly continue today and are the subject of ongoing controversy. Fortean Picture Library.

Medjugorje is a village in present-day Bosnia-Herzegovina, an area that has experienced significant religious and political conflict throughout the twentieth century. In a largely Muslim region, thevillage was a haven for Roman Catholics. Through the centuries, the faithful had been primarily under the guidance of priests of the Franciscan order, but in 1878 Pope Leo XIII ordered secular clergy into the area. In the midst of this contested space, in 1981 five teenagers and one ten-year-old began experiencing visions of the Virgin Mary. From the beginning the beautiful lady with a starry crown and a child in her arms was identified as the Virgin, a fact confirmed when she initially spoke to them. Apparitions occurred daily, and within a few days large crowds began to gather. These gatherings created an immediate problem, as they constituted unauthorized meetings for worship in what was then the irreligious state of Yugoslavia. However, the local priest was soon convinced that the visions were legitimate and moved to protect the children from the police. He eventually was arrested and sent to prison on charges of opposing the state system of socialism.

The children were subjected to a variety of tests, and most concluded they were not faking the apparitions and were in a genuine altered state of consciousness. The faithful began to report miracles, especially healings. The local bishop appointed a commission to initially decide on the validity of the occurrences, but he found himself restrained by considerations of government opposition. Meanwhile, a large number of pilgrims from neighboring countries, especially Italy, began to flock to Medjugorje.

As the study commission pursued its work, the bishop replaced two of the remaining Franciscan priests in the diocese with secular priests. The priests appealed to the Virgin at Medjugorje, and she supported their cause over the bishop’s. This action appears to have occasioned the bishop’s turning against the apparitions and denouncing them as a collective hallucination. However, large crowds were now coming, and the government saw them as beneficial in projecting an image of Yugoslavia as an open country. Even during the days of the fighting following the breakup of Yugoslavia in the 1990s, the apparitions and pilgrimages to Medjugorje continued.

The basic message of Medjugorje has been a call for a return to traditional Catholic piety focused on the five weapons than can be used against Satan in spiritual warfare: daily prayer of the Rosary; fasting on Wednesdays and Fridays; daily reading of the Bible; monthly confession; and frequent attendance at the Eucharist. However, much of the interest in the apparitions has been generated by the so-called ten secrets that the Virgin has been imparting to the six visionaries. The secret messages each concern happenings predicted to occur in the future. Only one of the secrets has been made public, a promise by Mary to mark the hillside site of the apparitions with a visible and indestructible sign.

The ten secrets have been revealed individually to each of the visionaries. As each receives all ten, the Virgin stops appearing to that person on a daily basis. As of 2005, three had received all ten secrets, and the Virgin now appears to them once annually. Three others have received nine of the secrets and continue to experience apparitions daily at 6:40 p.m.

Medjugorje remains one of the most controversial Marian sites in the world. It has engendered significant support, and Medjugorje organizations now sponsor regular pilgrimages to the site from around the world. At the same time, official statements have been far from supportive. Local bishops have stated their own inability to find anything supernatural, although church authorities have not moved to stop the pilgrimages except in cases where a bishop or diocese appears to be an official sponsor. It does not seem that further official action will be forthcoming in the near future.

Connell, Janice T. The Visions of the Children: The Apparitions of the Blessed Mother at Medjugorje. New York: St. Martin’s Press, 1992.
Hebert, Albert J. Medjugorje: An Affirmation and Defense. Paulina, LA: A. J. Hebert, 1990.
Manuel, David. Medjugorje under Siege. Orleans, MA: Paraclete Press, 1992.
Sivric, Ivo. The Hidden Side of Medjugorje: A New Look at the “Apparitions” of the Virgin Mary in Yugoslavia. Saint-Francois-du-lac, PQ: Psilog, 1989.
Weible, Wayne. The Final Harvest: Medjugorje at the End of the Century. Orleans, MA: Paraclete Press, 1999.
The Encyclopedia of Religious Phenomena © 2008 Visible Ink Press®. All rights reserved.

Feedback
Flashcards & Bookmarks ?
Please log in or register to use Flashcards and Bookmarks. You can also log in with
Flashcards ?
My bookmarks ?
+ Add current page to bookmarks
Mentioned in ?
References in periodicals archive ?
It is emphasized that about ten thousand Lebanese pilgrim tourists visit Medjugorje every year, and it is certainly one of the best ways of connecting the two countries.
Ambassador Mato Zeko hands credentials to Lebanese President Michel Aoun
During his meeting with Igor Crnadak at Baabda Palace, Aoun also called for increasing bilateralism in tourism as "almost 7,000 Lebanese visit the city of Medjugorje," in Herzegovina, a statement from the presidency said.
Aoun, Bosnian official discuss bilateral ties
Aoun praised the existing relations between the two countries and called for strengthening ties in all fields, "especially on the tourism level, since about 7,000 Lebanese visit annually the city of Medjugorje through Bosnia and Herzegovina."
Aoun meets Foreign Minister of Bosnia: We look forward to your support for establishment of Human Academy for Dialogue and Convergence
He's been to Lourdes in France, Medjugorje in Bosnia and Herzegovina, and even to Rome, where he met Pope John Paul II.
Walk the walk: Les Johnson is spreading a message of peace--one walking stick at a time
And Mr Fitzpatrick told the Scottish Catholic Observer how his life was changed when visiting Medjugorje in Bosnia and Herzegovina, where apparitions are reputed to have been seen by six children in 1981.
How Fitzy went face to faith
It turns out that they were Korean Catholic emigrants living in Los Angeles, on a pilgrimage to Medjugorje, where the Virgin Mary apparently appeared(!) in 1981.
My life at a Korean law firm (part 22)
"He was very religious and had visited Medjugorje and expressed a wish to go back.
Tragic man who choked on Mars bar was such a kind person; Family's tribute to Luas passenger after verdict of accidental death
"The visionary from Medjugorje was speaking to him in Portuguese and [he] was able to understand every word out of her mouth."
No vision of Our Lady at Knock after teen's claim
While the city of Medjugorje in the former Yugoslavia gained international attention in 1981 when six children claimed to have encountered the Virgin Mary, there has also been a long history of religious apparitions in the United States, as well, and often in some of the most unusual ways.
People Keep Seeing Jesus In Strange Places