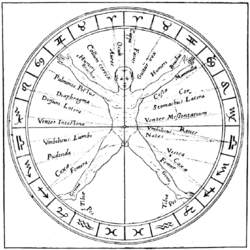 An illustration depicting the signs in relation to the exterior and interior of the human body. Reproduced by permission of Fortean Picture Library.

The melothesic, or zodiacal, man is the image, often found in medieval astrology works, of a human being with the signs superimposed on the parts of the anatomy they are traditionally said to rule. These anatomical and zodiacal correspondences begin with Aries (associated with the head and face) and follow the order of the zodiac down the body to Pisces (associated with the feet). The sun sign—and, to a lesser extent, the Moon sign and the rising sign (ascendant)—people are born under usually indicates an area of the body with which they are likely to have trouble. Aries natives, for instance, tend to experience a disproportionate number of blows to the head or frequent headaches. Pisces people, on the other hand, tend to have accidents involving the feet (and easily contract such diseases as athlete’s foot).

As outlined in Manly P. Hall’s Astrological Keywords, the anatomical correspondences of the 12 signs of the zodiac are as follows:

Aries: Head and face with their bones and muscles; eyes, cerebrum; upper jaw

Aquarius: Lower leg, including the calves and ankles; teeth; blood circulation in general

While there is general agreement on these correspondences, minor variations are often found from one astrologer to the next. The rectum, for example, which Hall associates with Scorpio, is more often associated with Virgo. See also: Medical Astrology.