the theory of excitation of muscle and nerve cells generally accepted in physiology.

The membrane theory of excitation is based on the idea that stimulation of the surface membrane of an excitable cell causes a molecular restructuring that alters the membrane’s permeability and gives rise to transmembranous ion currents. The source of energy for these currents is the constant uneven distribution between the cytoplasm and the extracellular medium of the principal inorganic ions: the accumulation of K1 ions within the cell and the removal of Na+ and Cl- ions (see Figure 1). 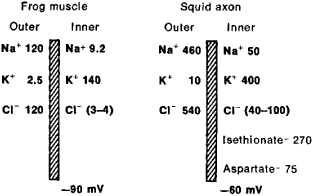 Figure 1. Schematic diagram of concentration of principal electrolytes (in millimoles per liter) and difference in potential between the two sides of a cell membrane

The principal elements of the membrane theory were formulated by the German neurophysiologist J. Bernstein in 1902 and developed by the British scientists P. Boyle and E. Con way in 1941 and A. Hodgkin, B. Katz, and A. Huxley in 1949. Bernstein suggested that the surface membrane of an excitable cell at rest possesses selective permeability: K+ ions pass across it much more easily than do Na+ and Cl- Because the K+ concentration in the cell is higher than it is in the extracellular medium, the diffusion of these ions across the membrane creates a difference in potentials (the resting potential, or RP). The inside of the membrane is negatively charged; the outer side, positively. The dependence of the RP on K+ ions is confirmed by its proportional decrease in magnitude with increasing K+ content outside the cell.

To explain the manner in which the cell maintains its constant ion composition and negative inner potential (forcing Na+ ions outside), it was assumed that ions can be transported across the membrane not only by electric forces and diffusion (passive transport) but also by an active transport mechanism called the sodium pump. The result of the operation of the sodium pump, which can force Na+ against the concentration and electric gradients, is that the cell accepts one K+ ion for each Na+ ion removed across the membrane.

When a cell is stimulated, the ion permeability of its membrane changes, either because of a change in the membrane’s electric field (electric excitability) or as a result of the effect of chemical substances on special receptor structures of the membrane (chemical excitability). According to Bernstein, electric stimulation makes the membrane permeable to all ions, causing the temporary disappearance of the RP in the excited portion and giving rise to an action potential (AP).

Subsequent research, using a microelectrode technique, on the phenomena appearing upon electric stimulation has shown that the AP is approximately 1.5 times greater than the RP. The result is an inversion: the excited area of the membrane acquires a difference in potential in a direction opposite to that which existed during the resting state. (The inner side of the membrane becomes positively charged, relative to the outer.) Contrary to Bernstein’s theory, however, stimulation causes not a general but a selective increase in ion permeability—that is, for Na1 ions only, which pass into the cell, carrying positive charges across the membrane. The result here is also an AP. This explanation is confirmed by the disappearance of the AP when Na+ is removed from the extracellular medium (the RP remains un-changed) and by the discovery of the flow of Na+ ions into the cell upon excitation.

The most precise data on ion currents across the surface membrane during the AP have been obtained by the fixation of voltage on the membrane. Voltage fixation involves measuring the difference in potential with one pair of electrodes (one of them inside the cell) and passing a current through another pair from a booster that maintains the difference at a constant level regardless of changes in the membrane. It has been shown that excitation gives rise to a brief ion flow into the cell, followed by a reverse flow toward the exterior. The initial influx is caused by the movement of Na+ across the membrane; the outward flow, by the movement of K+ out of the cell. The result is that the membrane’s original state of electric polarization is restored. The temporary nature of the ion currents arising during the AP is due both to the presence in the membrane of a mechanism that increases (“activates”) ion permeability and to the opposite process (“inactivation”) , which induces the development of refractivity and accommodation to electric stimulation.

The appearance of an AP in any part of an excitable cell results in the formation of a “longitudinal”difference in potential on the membrane and in the flow of electric currents between the excited and unexcited parts (action currents). These currents, in turn, induce analogous changes in permeability in the unex-cited parts of the cell, and the area of excitation begins to travel along the cell surface (see Figure 2). 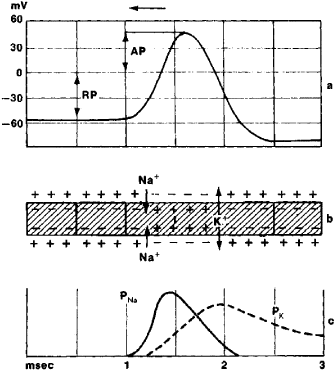 The ionic processes described lead to accumulation in the cell of some Na+ and to the loss of some K+ , as well as to the propagation of neural impulses. These changes are so insignificant in comparison to the existing ion gradients between the cytoplasm and the extracellular medium that a cell can generate a huge number of impulses without immediately restoring the disrupted ion ratios by active ion transport, which removes excess Na+ from the cell and pumps into it the amount of K+ it lacks.

The specific changes in ion permeability resulting from chemical stimulation also give rise to transmembranous ion currents. These changes take place in the interneuronal and neuromuscular synapses and form the basis for synaptic transmission by mediators.

The nature of the molecular restructuring that is responsible for the appearance of ion currents is the least understood aspect of the membrane theory of excitation. Ion transport across a membrane is believed to proceed in either of two ways: through a system of pores, the entrance to which is closed during the resting state (possibly by Ca2+ ions) and opened as a result of external stimulation, or by means of special transmitter molecules that bind the ions on one side of the membrane and release them on the other.