(storage unit), a unit of a computer or an independent device designed to record, store, and reproduce information.

Memory units are used most widely in digital computers but also have applications in automation, remote-control, nuclear-physics, and other devices, where they store discrete (for the most part) information, coordinate in time the operation of several facilities, or accumulate data to be transmitted through remote-control channels. The recording of information in memory units is based on various physical principles: the mechanical displacement or removal of part of the material of the information carrier (paper tape or punchcards), a change in the magnetic state of the material (magnetic tapes, disks, drums, and ferrite cores), the accumulation of an electrostatic charge in dielectrics (condensor memory units and cathoderay memory tubes), audio or ultrasonic oscillations (delay lines), and the application of superconductivity (cryogenic components).

The main indexes defining the efficiency of memory units are the capacity M, the maximum number of words or symbols that can be simultaneously stored in a memory unit, expressed in binary units (bits) or bytes (eight bits); and the speed, defined by the duration of a full access cycle to the memory unit Tc (or sometimes by the readout time) or by the access rate F = 1/TC. Sometimes a generalized parameter—the information capacity W = M x F (reaching 1013 bytes/sec in the best modern memory units)—is used to characterize a memory unit.

According to their intended use, methods of data distribution, and special characteristics of operation, memory units are generally classified as shown in Figure 1. Depending on the type of retrieval of desired information, a distinction is made between addressed memory units, in which a specific number (address) is assigned to each memory cell and the required information is sought at a specific address, and associative memory units, in which the information is sought on the basis of a set of indicators. Either sequential or cyclic access to cells or random access, in which a cell is accessed independently of its location among other cells, is possible in a memory unit.

Depending on the frequency of access, memory units are divided into nonerasable units, which allow single recording with subsequent repeated readout without regeneration (such as diode matrices, punchcards, and paper tapes), and erasable units (memory units on magnetic carriers, ferrite cores, flip-flops, and other devices).

To store large data arrays so-called external memory units are most often used, the recording being accomplished on magnetic carriers: magnetic tapes, drums, and disks. By means of parallel switching of several blocks of the memory unit it is theoretically possible to store unlimited volumes of information. The capacity of modern external memory units using magnetic tapes runs as high as 108 bytes (with up to 256 on-line blocks); the capacity of those using magnetic disks is up to 6 x 108 bytes. The input (output) rate is 3.2 x 105 bytes/sec for magnetic-tape memory units and 2 x 105 bytes/sec for magnetic disk memory units.

Working storage units, which are generally constructed with toroidal ferrite cores (up to 95 percent of all working storage units) or less often with other ferromagnetic components (such as multiaperture ferrite plates and magnetic thin films), are used in digital computers to store data needed in the next stages of problem-solving. Integrated-circuit memory units are considered to be extremely promising. The capacity of working storage units in modern large digital computers runs as high as 16 x 106 bytes; the write and read (access) time runs from hundredths of a microsecond to several microseconds.

A buffer memory, which performs the functions of an intermediate link during the exchange of information between devices having different speeds (such as working storage and external memory units) is often set aside in a separate block in large digital computers. A high-speed memory block of small capacity (on the order of several hundred bytes) is also

used occasionally. High-speed memory units are built on memory components of increased speed, such as thin magnetic films, tunnel diodes, and flip-flops. Permanent memory units are used to store data whose composition does not change during the processing of a specific type of information or the solution of one class of problem (such as tabular data, standard subprograms, and the unchanged programs of control computers). 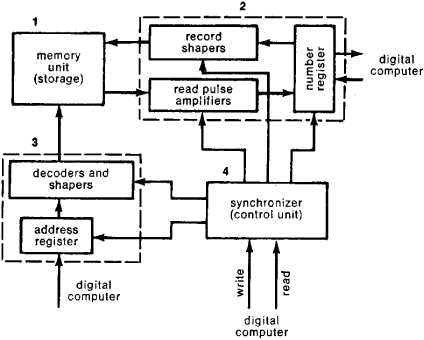 proper (1), a numerical section (2), an address section (3), and a local control block, or synchronizer (4). The storage consists of memory cells and performs the functions of data storage. The numerical section, or write-read circuit, is the intermediate link in which data exchange takes place between the storage and devices that are external with respect to the memory unit. It consists of a number register for temporary storage of words (or numbers) that are read in or read out; read-in pulse shapers that convert the numerical code into a series of signals recorded by the storage cells; and readout pulse amplifiers for amplifying readout signals, canceling the noise, and shaping the readout signals. In the address part of the memory unit, the assigned address code is converted into a set of signals that unambiguously define the required storage location. The synchronization block forms internal commands that effect control of the sequence of operation of all assemblies of the memory unit in accordance with incoming commands. The aggregate of all blocks of the memory unit except the storage is called the electronic control circuit, the peripheral equipment, or the electronic framework of the memory unit.

The human brain, which contains about 10−15 x 109 neurons, or memory cells, combining the functions of memory and logical data processing, is a remarkable memory unit. On the average the volume of the brain is 1.5 cu decimeters; its weight, 1.2 kg; and its power requirement, about 2.5 watts. The best modern electronic memory units of equal capacity occupy a volume of several cubic meters and weigh tens or hundreds of kilograms, while their power requirement runs into several kilowatts. Scientifically based predictions assert that the improvement of electronic equipment and the use of new high-efficiency storage media, in conjunction with the extensive use of bionic methods in solving problems connected with the synthesis of memory units, will make it possible to create memory units that are close to the human memory in their parameters.

Feedback
Flashcards & Bookmarks ?
Please log in or register to use Flashcards and Bookmarks. You can also log in with
Flashcards ?
My bookmarks ?
+ Add current page to bookmarks
Mentioned in ?
References in periodicals archive ?
U ([V.sub.i], VM[P.sub.j]) = 0 denotes that the memory unit is not available(if R(VM[P.sub.j]) - Dem([V.sub.j]) <= 0)
A Memory Configuration Method for Virtual Machine Based on User Preference in Distributed Cloud
In given ASMD chart, the interactions between the datapath unit, control unit and memory unit are described.
A Computationally Efficient Pipelined Architecture for 1D/2D Lifting Based Forward and Inverse Discrete Wavelet Transform for CDF 5/3 Filter
Memory Unit. Memory unit M(it) = {[m.sub.1](it),[m.sub.2](it),..., [mR.sub.(it)](it)} is defined as the set of all Pareto-optimal antibodies in A(it), whose size R(it) changes dynamically.
A New Approach for Delivering Customized Security Everywhere: Security Service Chain
The committee is analysing the memory units from the Cockpit Voice Recorder (CVR) and the Flight Data Recorder (FDR) before determining if they can be repaired in Egypt or will need to be sent abroad.
Crashed EgyptAir jet flight recorders severely damaged
As mentioned in the previous section, the memory units store the data obtained from the processing, the UM1 and UM2 units store the results of the transformation along the rows (FL, FH).
Arquitectura hardware para la implementacion de la transformada discreta Wavelet 2D
The nonlinear function F (the dotted rectangle in Figure 1) is a compressing function from 32 bits to 8 bits, which contains a 32-bit memory unit R.
Cryptanalysis of Loiss stream cipher-revisited
Each memory unit has a capacitor to store electricity and a transistor to switch between 1 and 0.
Memory upgrade: the demands of modern computing call for a seismic shift in data storage and retrieval
Three new NSNs with different memory capacities, are available for use as the integrated vehicle health management system (IVHMS) data transfer memory unit (DTMU).
New memory card device NSNs
Sometimes it's as if time and space are suspended when Hollie Fowler steps into Prestige Care's memory unit, which is something that she welcomes on a day when her role as an executive seems too stressful.
Rethinking memory care: LTC communities learn orient themselves to residents reality
The third memory unit, [RAM.sub.1], provides temporal storage for the computed values in the forward step and to synchronize the pipeline stages as will be explained in the following section.
Resource efficient hardware architecture for fast computation of running max/min filters
"There's a dockable SR-R4 SR memory unit that records 16-bit linear SRRAW directly onto an SR memory card at up to 5 Gbps."
Sony F65
In 2002, he won several gold and silver awards at al-Basel Creativity and Inventions Exhibition for his inventions, particularly a machine for cleaning porcelain, and a robot equipped with a memory unit.
Issa Abboud, a Young Inventor Killed by Enemies of the Homeland