a variety of optical catadioptric systems in which a spherical (or, less frequently, an elliptical) mirror, or a system of mirrors and lenses, is preceded by one or more achromatic menisci. Meniscus systems were invented in 1941 simultaneously and independently by D. D. Maksutov and D. Gáabor. Meniscus systems use meniscus lenses with surfaces that have nearly the same radii of curvature. Lenses of this type are compensators; that is, they have little effect on the general direction of the rays but appreciably change the distortions (aberrations) of optical images of the optical systems of which they are a part.

A meniscus is nearly achromatic (that is, it is free from chromatic aberration) with respect to a parallel pencil of rays if the

Figure 2. Double achromatic menisci in which the dispersion of the first lens is compensated by that of the second

Practical applications in astronomy include meniscus systems in telescopes (which are also called Maksutov telescopes), schematically represented in Figure 3. The first scheme (Figure 3,a) provides adequate field of view (up to 5°) and aperture ratio (up to 1:1.2). The second scheme (Figure 3, b), which is the meniscus analog of the Cassegrain reflector system, provides a moderately large field of view (of the order of 1°) at a long focal length and, therefore, at a lower aperture ratio (1:10 to 1:15). The third scheme (Figure 3,c), which is the meniscus analog of a Gregorian reflector system (telescope), resembles the second scheme in its features. 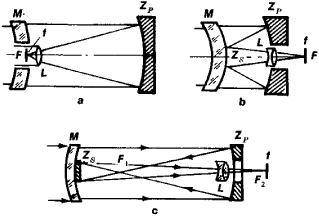 Figure 3. Optical diagrams of meniscus telescopes, in which an additional correcting lens is used to correct the curvature of the image field and the distortion: (a) system with an opening in the meniscus designed for the introduction of a photographic plate, (b) and (c) meniscus analogs of the Cassegrain and Gregorian reflectors with a second mirror cemented to the meniscus and with an opening in the primary mirror for allowing the image to be projected beyond the mounting of the mirror. (M) Meniscus, (ZP) principal spherical (elliptical) mirror, (F) focus of the system, (Zs) secondary mirror, (L) correcting lens, (f) field to be photographed or observed.

Cassegrain-type meniscus systems are used in photographic objectives of long focal length. The shortness of these objectives for a relatively large diameter of the entrance pupil gives them an important advantage over telephoto lenses.

Meniscus systems are more compact than other optical systems with comparable parameters, which simplifies the control of meniscus telescopes by clockworks. Their principal surfaces are of a simple form (spherical), which simplifies manufacture and permits precise optical control of the meniscus systems. Correction of all the principal aberrations leads to high-quality images not only in the center of the field of view but also at the edges of large fields of view.

Feedback
Flashcards & Bookmarks ?
Please log in or register to use Flashcards and Bookmarks. You can also log in with
Flashcards ?
My bookmarks ?
+ Add current page to bookmarks
Mentioned in ?
References in periodicals archive ?
Meniscus Systems has launched the first online, do-it-yourself process plant monitoring service.
Best Operating Practice Solutions Web site. (Literature)
More than 500 calculations were done up until the end of 1944, and all classic mirror designs were modified to meniscus systems. Today such systems are known under names like Simak and Rumak, but they have their genesis in Maksutov's wartime notebooks.
Dmitri Maksutov: the man and his telescopes
Penning in Germany independently filed for patents on meniscus systems. But today Maksutov is almost solely credited with the approach.
Dmitri Maksutov's scientific legacy