A subdiscipline of condensed-matter physics that focuses on the properties of solids in a size range intermediate between bulk matter and individual atoms or molecules. The size scale of interest is determined by the appearance of novel physical phenomena absent in bulk solids and has no rigid definition; however, the systems studied are normally in the range of 100 nanometers (the size of a typical virus) to 1000 nm (the size of a typical bacterium). Other branches of science, such as chemistry and molecular biology, also deal with objects in this size range, but mesoscopic physics has dealt primarily with artificial structures of metal or semiconducting material which have been fabricated by the techniques employed for producing microelectronic circuits. Thus mesoscopic physics has a close connection to the fields of nanofabrication and nanotechnology. Three categories of new phenomena in such systems are interference effects, quantum size effects, and charging effects. See Artificially layered structures, Quantized electronic structure (QUEST), Semiconductor heterostructures

In the mesoscopic regime, scattering from defects induces interference effects which modulate the flow of electrons. The experimental signature of mesoscopic interference effects is the appearance of reproducible fluctuations in physical quantities. For example, the conductance of a given specimen oscillates in an apparently random manner as a function of experimental parameters (see illustration). However, the same pattern may be retraced if the experimental parameters are cycled back to their original values; in fact, the patterns observed are reproducible over a period of days. 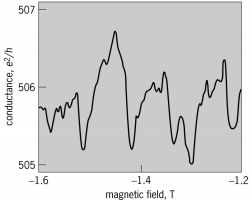 Another prediction of quantum mechanics is that electrons confined to a particular region of space may exist only in a certain set of allowed energy levels. The spacing between these levels increases as the confining region becomes smaller. One striking phenomenon which arises from these quantum size effects is the steplike increase of the conductance of electrons flowing through a constriction of several hundred nanometers' width. See Energy level (quantum mechanics)

Another mesoscopic system that shows quantum size effects consists of isolated islands of electrons that may be formed at the appropriately patterned interface between two different semiconducting materials. The electrons typically are confined to disk-shaped regions termed quantum dots. The confinement of the electrons in these systems changes their interaction with electromagnetic radiation significantly.

Isolated mesoscopic solids such as quantum dots or metallic grains on an insulating substrate also show novel effects associated with the discreteness of the charge on the electron. Devices known as single-electron transistors (SETs) are by far the most sensitive electrometers (instruments for measuring electrical charge) presently known. See Electrometer, Transistor

[‚mez·ə‚skäp·ik ′fiz·iks]
(physics)
A subdiscipline of condensed-matter physics that focuses on the properties of solids in a size range intermediate between bulk matter and individual atoms or molecules.

Feedback
Flashcards & Bookmarks ?
Please log in or register to use Flashcards and Bookmarks. You can also log in with
Flashcards ?
My bookmarks ?
+ Add current page to bookmarks
TheFreeDictionary presents:
Write what you mean clearly and correctly.
Mentioned in ?
References in periodicals archive ?
On 29 June Artsakh Republic President Bako Sahakyan sent an address to the participants of the "New Tendencies in Quantum and Mesoscopic Physics" international conference launched on the same day in Stepanakert.
Holding the international conference on the "New Tendencies in Quantum and Mesoscopic Physics" in Stepanakert is a significant and demanded event for our country.
Armenia : Address to the participants of the New Tendencies in Quantum and Mesoscopic Physics international conference
Mesoscopic physics revealed a number of open fundamental problems like quantum confinement, quantum vortices and loops, spintronics, quantum dots, etc.
Vortex Structures inside Spherical Mesoscopic Superconductor Plus Magnetic Dipole
Currently, I fabricate nanoscale-level devices and perform electrical measurements on them in order to discover new things about mesoscopic physics. These measurements are done with a variety of devices; most notably probe stations and cryogenic systems.
Suspect Arrested In University Of Illinois Scholar Kidnapping
Theoretically, the current noise has been regarded as an important topic in mesoscopic physics and a lot of theoretical work has been done since early 1990's.
The shot noise theory in the QPC was intensively studied by several theorists at the early stage of mesoscopic physics. (48-52)
The most well-known current noise study in mesoscopic physics is the experiments that proved the relevance of the fractional charge.
2 and the interest of the noise measurement in mesoscopic physics in Sec.
What can we learn from noise?--Mesoscopic nonequilibrium statistical physics--
(2002) Introduction to Mesoscopic Physics, Oxford University Press, ISBN 0198507380.
Carbon fiber based filled epoxy composites
Mesoscopic physics is the study of a strange new world intermediate in size between the microscopic realm of atoms and molecules and the macroscopic realm of ordinary visible and touchable objects.
Atoms of the mesocosm
Chapters cover the density matrix description of nonequilibrium statistical mechanics and new topics in the field of condensed matter physics, including weak localization, destruction of electronic phase coherence in disordered conductors, electron-electron and electron-photon interaction in dirty metals, and mesoscopic physics. The diagrammatic technique for systems out of equilibrium is explained, and is used to study quantum kinetic equations and linear response theory.
Quantum Transport Theory
The 25 papers of this proceedings were presented at the Workshop on Nuclei and Mesoscopic Physics held in October 2004 at the National Superconducting Cyclotron Laboratory of Michigan State U.
Nuclei and mesoscopic physics; proceedings