A division of the animal kingdom sometimes ranked as intermediate between the Protozoa and the Metazoa. These animals are unassignable to any of the better-known phyla, as usually defined. In the absence of proof concerning their relationships, and in view of the disagreement among zoologists relative to their affinities and even with respect to the facts and interpretation of their structure and life cycle, they are treated as a small phylum somewhere between Protozoa and Platyhelminthes. No particular phylogenetic interpretation should be attached to this placement.

The Mesozoa comprise two orders of small, wormlike organisms, the Dicyemida and the Orthonectida. Both are parasitic in marine invertebrates. The body consists of a single layer of ciliated cells enclosing one or more reproductive cells. These body cells are rather constant in number and arrangement for any given species. The internal cells do not correspond to the entoderm of other animals, as they have no digestive function. The life cycles are complex, involving both sexual and asexual generations (metagenesis).

a class of animals of subphylum Platyhelminthes, previously considered an intermediate group between Protozoa and Metazoa.

There are two subclasses of Mesozoa: Dicyemida and Orthonectida. The body, which reaches a length of 5 mm, is either a vermiform axial cell (in Dicyemida) or an aggregate of cells covered with ciliated epithelium (in Orthonectida). Mesozoa are endoparasites of marine invertebrates. Orthonectida live in the parenchyma of turbellarians and nemertines and in the body cavities and gonads of annelids, ophiuroids, and lamellibranchs; Dicyemida, in the kidneys of cephalopods.

The life cycle of Mesozoa is complex. Orthonectida are most often dioecious, with an alternation of asexual and sexual reproduction (see Figure 1). Dicyemida alternate parthenogenetic generations (nematogens) with a hermaphroditic generation (infusorigen) in the kidneys of cephalopods. Infusoriforms (the distribution stage) develop from the zygotes and emerge into the water. There are 14 species of Orthonectida, belonging to three genera (of two families); in the USSR, there are seven species (of 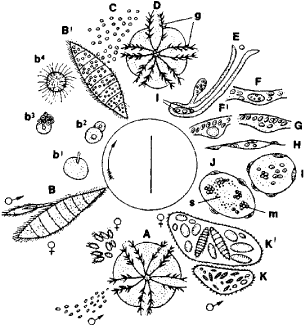 Figure 1. Diagram of life cycle of Rhopalura ophiocomae: (A) males ♂ and females ♀ emerging from ophiuroid Amphiura squamata; (B) fertilization of female by male; (B1) female filled with larvae, (b1), (b2), and (b3) being reduction division and cleavage of egg inside female and (b4) being ciliated larva; (C) emergence of formed larvae from female; (D) penetration of larvae into genital slits g of ophiuroid; (E) cross section of genital slit through which larvae l of parasite penetrate; (F) and (F1) larvae that have penetrated epithelium of ophiuroid’s genital bursae; (G) rudimentary plasmodia in epithelium of genital slits; (H) rudimentary plasmodia in peritoneal epithelium of host; (I) young plasmodium; (J) young plasmodium with morulae m, embryonic cells, and somatic nuclei s, the nuclei of the host’s tissues being visible around the plasmodium; (K) and (K1) mature male and female plasmodia with males CTand females ♀

[‚mez·ə′zō·ə]
(invertebrate zoology)
A division of the animal kingdom sometimes ranked intermediate between the Protozoa and the Metazoa; composed of two orders of small parasitic, wormlike organisms.
McGraw-Hill Dictionary of Scientific & Technical Terms, 6E, Copyright © 2003 by The McGraw-Hill Companies, Inc.

Feedback
Flashcards & Bookmarks ?
Please log in or register to use Flashcards and Bookmarks. You can also log in with
Flashcards ?
My bookmarks ?
+ Add current page to bookmarks
Mentioned in ?
References in periodicals archive ?
A new species of the genus Ciliocincta Kozloff, 1965 (Mesozoa, Orthonectida) parasitic in a marine turbellarian from Hokkaido.
A New Species of Orthonectida That Parasitizes Xenoturbella bocki: Implications for Studies on Xenoturbella
Development of the infusoriform emhryo of Dicyema japonicum (Mesozoa: Dicyemidae).
n,: dicyemid Mesozoa from Benthoctopus mnegellanicus.
Phylogenetic position of the dicyemid mesozoa inferred from 18S rDNA sequences.
The dicyemid Mesozoa as an integrated system for morphogenetic studies.
Developmental patterns and cell lineages of vermiform embryos in dicyemid mesozoans
The present molecular phylogenetic study based upon comparisons of nucleotide sequences of 18S rDNA shows that triploblastic animals form a monophyletic assemblage within the metazoan subtree and that the dicyemid mesozoa are an ingroup of the monophyletic unit of triploblastic animals.
As in phylogenetic trees previously constructed on the basis of rDNA sequences (Christen et al., 1991; Wainright et al., 1993; Smother et al., 1994), Trichoplax, which had once tentatively been grouped in the phylum Mesozoa (see Brusca and Brusca, 1990), was positioned within the diploblastic assemblage.
There have been opposing views on the role of the dicyemid mesozoa in the story of metazoan evolution.
Phylogenetic position of the dicyemid mesozoa inferred from 18s rDNA sequences