[′med·əl ‚rōl·iŋ]
(mechanics)
rolling
McGraw-Hill Dictionary of Scientific & Technical Terms, 6E, Copyright © 2003 by The McGraw-Hill Companies, Inc.
The following article is from The Great Soviet Encyclopedia (1979). It might be outdated or ideologically biased.

a means of pressure shaping metals and metal alloys by compressing the metals between rotating rolls. The rolls, generally cylindrical in shape, are either smooth or with depressions (passes) that form grooves when two rolls come together.

Because of the continuous operation of the process, rolling is the most efficient method of imparting required shapes to items. During rolling, the metal generally undergoes significant plastic compression deformation involving destruction of the original cast structure and the formation of a flatter and closer-grained structure; the metal’s quality is thereby improved. Thus, rolling serves not only to change the shape of the metal but also to improve its structure and properties.

Like other methods of pressure shaping, rolling is based on the ductility of metals. A distinction is made between hot, cold, and warm rolling. Most rolled products (billets, merchant and sheet metals, tubes, balls) are produced by hot rolling at initial temperatures of 1000°-1300°C for steel, 750°–850°C for copper, 600°–800°C for brass, 350°–400°C for aluminum and its alloys, 950°-1100°C for titanium and its alloys, and about 150°C for zinc. Cold rolling is used primarily to produce sheets and strips less than 1.5–6 mm thick and precision sections and tubes. Hot-rolled metal is later cold-rolled to obtain smoother surfaces and better mechanical properties. Cold rolling is also used because of the difficulty of heating and rapidly cooling thin items. Warm rolling, unlike cold rolling, is carried out at a somewhat elevated temperature in order to reduce the hardening (cold working) of the metal during deformation.

In special cases, metals are rolled in a vacuum or in a neutral atmosphere to protect the surface of the metal from oxidation. 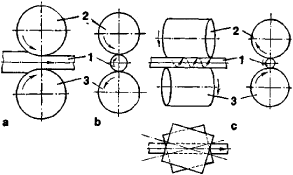 The capture of the metal by the rolls and the stability of the process result from the frictional forces arising on the contact surface between the metal and the rolls. For capture to occur, the tangent of the angle of bite α—the angle between the radii extended from the roll axes to points A and B (see Figure 3)—must not exceed the coefficient of friction: tan α ≤ μ. When a very smooth surface is not required, the surface roughness is added to the rolls in order to increase the angle of bite and, thus, of draft.

and decreases in the directions of entry and exit. In rolling bands with a rectangular cross section, the contact surface is calculated by the formula

, where r is the radius of the roll. In cold rolling of bands, the actual contact area is large because of the elastic compression of the rolls at points of contact with the metal.

The mean specific force, which is also called the normal bearing stress, depends on many factors and may be expressed by the formula pm = n1n2n3σ. Where n1 is the coefficient of the state of stress of the metal, which depends mainly on the ratio of the length of the arc of bite—the arc between points A and B on the circumference of the cross section of the roll (Figure 3)— to the mean thickness and width of the rolled band, on the coefficient of friction, and on the stretching of the rolled metal (stretching is widely used in cold rolling); n2 is the coefficient that accounts for the effect of the rolling speed; n3 is the coefficient that accounts for the effect of the cold working of the metal; and σ is the yield point (resistance to deformation) of the metal at the temperature used in the rolling process. Coefficient n1 is the most important and varies widely—from 0.8 to 8—depending on the factors mentioned above. This coefficient increases as frictional forces on the contact surfaces increase and the thickness of the workpiece decreases. In practical calculations, n3 is taken as 1 in hot rolling and n2 is taken as 1 in cold rolling. 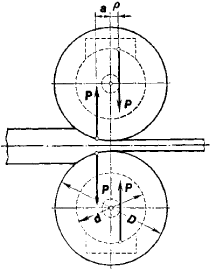 Figure 4. Direction of the resultant forces acting on the rolls in the simple process of rolling, taking into account the effect of the friction in the bearings

The relationship between the force P and the moment M required for the rotation of each roll is given by the formula M = P(a + ρ), where a is the arm of force P, which is in the range (0.35–0.5)

, and ρ is the radius of the friction circumference of the roll bearings, equal to the coefficient of friction of the bearing multiplied by the radius of the bearing trunion. The force on a roll in rolling steel wire and steel bands varies from about 200 to 1,000 kilonewtons (kN), that is, 20 to 100 tons-force; the force in rolling sheets from 2 to 2.5 m wide reaches 30 to 60 MN (3,000 to 6,000 tons-force). The moment required for rotating both rolls in rolling steel wire and small sections varies from 40 to 80 kN-m (4 to 8 tons-force-m), and the moment required for rolling slabs and wide sheets reaches 6.000–9,000 kN-m (600–900 tons-force-m).

Reducing or changing the cross-sectional area of a workpiece by the compressive forces exerted by rotating rolls. The original material fed into the rolls is usually an ingot from a foundry. The largest product in hot rolling is called a bloom; by successive hot- and then cold-rolling operations the bloom is reduced to a billet, slab, plate, sheet, strip, and foil, in decreasing order of thickness and size. The initial breakdown of the ingot by rolling changes the coarse-grained, brittle, and porous structure into a wrought structure with greater ductility and finer grain size.

A schematic presentation of the rolling process, in which the thickness of the metal is reduced as it passes through the rolls, is shown in illus. a. The speed at which the metal moves during rolling changes, as shown in illus. b, to keep the volume rate of flow constant throughout the roll gap. Hence, as the thickness decreases, the velocity increases; however, the surface speed of a point on the roll is constant, and there is therefore relative sliding between the roll and the strip. The normal pressure distribution on the roll and hence on the strip is of the form shown in illus. c. Because of its particular shape this pressure distribution is known as the friction hill.

A great variety of roll arrangements and equipment are used in rolling. The proper reduction per pass in rolling depends on the type of material and other factors; for soft, nonferrous metals, reductions are usually high, while for high-strength alloys they are small. Requirements for roll materials are mainly strength and resistance to wear. Common roll materials are cast iron, cast steel, and forged steel.

Feedback
Flashcards & Bookmarks ?
Please log in or register to use Flashcards and Bookmarks. You can also log in with
Flashcards ?
My bookmarks ?
+ Add current page to bookmarks
Mentioned in ?
References in periodicals archive ?
- Based on Service, the market is categorized into Machining, Metal Cutting, Metal Folding, Metal Forming, Metal Punching, Metal Rolling, Metal Shearing, Metal Stamping and Metal Welding.
Structural Steel Fabrication: Worldwide Market Analysis & Forecast to 2027
Police found the once-abandoned warehouse had been outfitted with a 12-foot metal rolling fence, "fortified doors," a large concrete wall around the parking lot and surveillance cameras.
San Bernardino Police Find Largest Indoor Marijuana Operation
It was in 1875 that brothersin-law George Crofts and Frederick Assinder left the famous city metal rolling firm of R.W Winfield and set up on their own as brass founders in Lower Essex Street.
Family still handling business; brum firm celebrates its 140th anniversary
Several assemblages included huge metal rolling pins that appear to be uncoupled from a nineteenth-century machine.
Louise Nevelson: Pace Gallery
The all-rubber, reinforced sealing solutions are said to provide metal rolling mills with high-performance and easy-to-install solutions to protect large-size bearings from the ingress of potentially harmful contaminants.
Radial shaft seal rubbers
Firemen also found it hard to extinguish the fire because the establishment's metal rolling doors that were almost impossible to open from the outside, Rellosa said.
P10M lost in Naga City fire
We are the industry leader in laser cutting, metal fabrication, laser engraving, welding, tube bending, sheet metal bending, powder coating, machining, tube perforation, sheet metal rolling and metal spinning.
Mississauga's LaserNett Launches a Redesigned Website
The partners are also developing a bauxite mine with capacity to produce 4 million tonnes of the raw material for the plant a year, and a metal rolling mill with a capacity of up to 460,000 tonnes.
In Brief
Metal rolling equipment and technologies are central to making various projects of plates, sheets, strips, bars, and wires, but designers and manufactures of such equipment are having to deal with scarcity in both materials and energy.
Advances in rolling equipment and technologies II; proceedings
Pipe industry: VMZ launches a metal rolling complex aStan-5000a with the capacity of 1.2 mn tons of rolled metal annually.
Veles Capital - Daily review - Sep 28, 2011
US speciality chemicals, oils and lubricants producer Houghton International announced Tuesday it had closed the acquisition of the Shell Metalworking and Metal Rolling Oils business from a unit of Anglo-Dutch oil and gas major Shell (LON:RDSA; AMS:RDSA) for an undisclosed amount.
US Houghton completes buy of Shell Metalworking and Metal Rolling Oils business