electron tubes (triodes and tetrodes) whose vacuum-tight envelope is made of metal and ceramic. Such tubes are used in radio engineering for generation and amplification of oscillations in the decimeter and centimeter wavelength bands, in the continuous and pulsed modes of operation. Metal-ceramic tubes were developed in Germany in the late 1930’s by Telefunken. The envelopes of metal-ceramic tubes are made from forsterite ceramic (2MgO-SiO2) and titanium, which have identical coefficients of thermal expansion, or from alumina ceramic (Al2O3) and a metal (usually copper, a copper-nickel alloy, Kovar, or titanium).

In a metal-ceramic tube the electrodes are connected by metal disks to metal cylinders (see Figure 1). The cylinders are connected to the demountable part of the oscillatory system, consisting 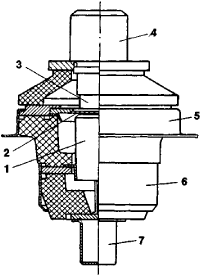 of sections of coaxial lines. The substitution of ceramics for glass has increased the precision and rigidity of mounting of the electrodes, thus making possible a reduction in the interelectrode space—for example, to 15–20 microns between the cathode and the control grid—and, as a result, a decrease in the time of electron transit between electrodes and an increase in the upper operating frequency limit. Ceramics have better heat resistance and lower superhigh-frequency dielectric losses than glass; there is also good heat dissipation from the electrodes through the metal disks soldered to the ceramic. As a result, metal-ceramic tubes make possible an increase in power output and an improvement in efficiency (see Figure 2). In the 1950’s and 1960’s, because of these advantages, the use of metal-ceramic envelopes was extended to other electrovacuum devices, such as klystrons, magnetrons, and thyratrons. 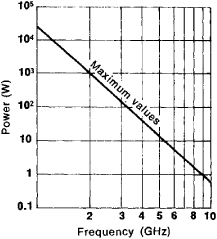 Figure 2. Maximum output power of metal-ceramic tubes as a function of operating frequency in the continuous mode