a substance that has the properties of an antiferromagnet in weak magnetic fields and of a ferromagnet in fields with an intensity greater than 5–10 kilooersteds. Laminar compounds such as FeCl2, in which layers of iron ions that have a magnetic moment are separated from one another by two layers of nonmagnetic chlorine ions, are typical metamagnets. The layers of magnetic ions are two-dimensional ferromagnets, and there is a strong ferromagnetic exchange interaction between ions within the layers. Adjacent layers of magnetic ions are bonded antiferromagnetically. As a result, an ordered state is established in the system of magnetic moments in the form of a laminar magnetic structure consisting of ferromagnetic layers of alternating direction of magnetization. Neutron-diffraction studies have confirmed the existence of such a magnetic structure in such metamagnets as FeCl2, FeBr2, and FeCO3.

Because of the relatively weak antiferromagnetic bonding between layers and the not very great magnetic anisotropy of the layers themselves, external magnetic fields with an intensity greater than 5–10 kilooersteds can convert a laminar metamagnet into a homogeneous magnetized ferromagnet (see Figure 1). A first-order phase transition, in which the magnetization vectors of all layers of the metamagnet are set along the applied magnetic field, is called a metamagnetic transition. 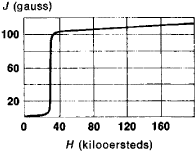