[mən′yāz ‚thir·əm]
(mathematics)
A theorem stating that the curvature of a surface curve equals the curvature of the normal section through the tangent to the curve divided by the cosine of the angle between the plane of this normal section and the osculating plane of the curve.
McGraw-Hill Dictionary of Scientific & Technical Terms, 6E, Copyright © 2003 by The McGraw-Hill Companies, Inc.
The following article is from The Great Soviet Encyclopedia (1979). It might be outdated or ideologically biased.

a theorem in differential geometry that establishes the property of curvatures of plane sections of a surface. Let TT be an arbitrary plane through the tangent MT at the point M to the surface S (see Figure 1), θ be the angle that 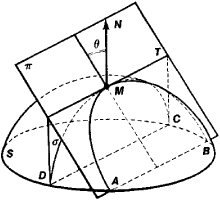