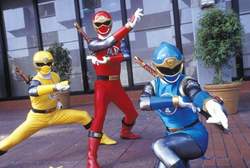 Six multicultural high school students, guided by their mentor, an interdimensional being named Zordon, guard the universe against evildoers and miscreants. Each of the teens—Jason Lee, Zack Taylor, Billy Cranston, Kimberly Hart, and Trini Kwan—is given access to “extraordinary powers drawn from the ancient creatures [known as] dinosaurs.” When they are in danger, they point their Morphers to the sky and call out the names of their “dinosaurs”: Mastodon! Pterodactyl! Triceratops! Sabertoothed Tiger! Tyran-nosaurus! The teens then morph into “a formidable fighting force known to one and all as the Power Rangers.”

Armed with Power Coins, Power Crystals, Blade Blasters, colossal fighting machines called Zords (that connect to form one colossal Mega-zord), and the ancient secrets of martial arts, the Mighty Morphin’ Power Rangers (MMPR) followed the success of the Teenage Mutant Ninja Turtles as the next karate-kicking defenders of the world. As Power Rangers, they are superstrong, super-fast, and super-determined. Donning high-tech racecar driver-like bodysuits and plastic masks and helmets, they are primary-colored heroes well versed in combat skills. In fact, most fans identified the original five rangers by their colors: the Red Ranger (Jason), the Black Ranger (Zach), The Blue Ranger (Billy), the Pink Ranger (Kim), and the Yellow Ranger (Trini). Though the Rangers’ names and colors have changed over the years— and their look has been updated to a high-tech style featuring space and astronomy themes— they are still a fun-loving group of teens sworn to save the earth from destruction.

The Mighty Morphin’ Power Rangers were introduced in Japan in 1975 as Secret Task Force Goranger, a children’s television show produced by Toei Company Ltd., one of Japan’s largest movie studios. Haim Saban, founder and former executive producer of Saban Entertainment, encountered a live-action “Dinosaur Task Force” series in 1992, while he was traveling in Japan, and decided to repackage the show for a U.S. audience as The Mighty Morphin’ Power Rangers. (Toei still holds the rights to the Power Rangers in Asia and produces the Japanese version of the heroes.)

Since the Power Rangers premiered on the Fox network in 1993, they have “built one of the most passionate groundswells of devotion in the history of kids’ entertainment,” said San Francisco Examiner writer Peter Stack. The Mighty Morphin’ Power Rangers show ran for three seasons, from 1993 to 1996, in which the Rangers battled the likes of Rita Repulsa, Goldar, Finster, Squatt and Babo, Scorpina, Lord Zedd, Ivan Ooze, Rito Revolto, and Mastervile.

Twentieth Century Fox released the Saban Entertainment-produced Mighty Morphin’ Power Rangers: The Movie in 1995. In this live-action feature, the super-warriors face off against Ivan Ooze, a centuries-old evildoer out to destroy Zordon. Despite its $40 million worth of special effects, critics panned the film. Not surprisingly, kids loved it. Licensed children’s books, action figures, masks, T-shirts, bed sheets, a comicbook series from Hamilton Comics, and other merchandise enjoyed healthy sales in the retail market—the action figures alone ranking within the top three boys’ character toys on the U.S. market. Until the arrival of the Power Rangers, it was almost unheard of for Japanese character merchandise to dominate the American retail market; at its height, trade publications reported annual U.S. sales of Power Rangers merchandise of $100 million.

By 1996, the popularity of the Power Rangers had waned. But because toy sales were still strong and the television show was near the top of the ratings list, Saban executives decided to reinvest in the property in an effort to attract a younger generation of viewers. A massive licensing and merchandising program was kick-started, and the Power Rangers look was updated. Multiple changes were made to the TV show’s title, which became Power Rangers Zeo (1996); Power Rangers Turbo (1997); Power Rangers in Space (1998); and Power Rangers Lost Galaxy (1999). By the end of the 1990s, the Rangers had a new lease on life, with the Nielson Galaxy Explorer hailing Power Rangers as the “most popular kids show of the 1990s.”

Feedback
Flashcards & Bookmarks ?
Please log in or register to use Flashcards and Bookmarks. You can also log in with
Flashcards ?
My bookmarks ?
+ Add current page to bookmarks
Mentioned in ?
References in periodicals archive ?
Jason David Frank played the Green Ranger and the White Ranger in the "Mighty Morphin' Power Rangers" series and its other iterations over the years.
Pop culture heroes expected at Toycon 2018
i Savour instead the mechanised mayhem of a four-part carnival floor show that gleefully melds Mighty Morphin' Power Rangers and Avatar, with giant automata and frenzied audience participation, including a glowstickfestooned finale to the disco beat of Y.M.C.A.
EXPAND YOUR HORIZONS; from traditional crafts to futuristic cafes, the japanese capital is simply magical, as damon smith discovers tr avel report TOKYO
The upcoming series targets a 20-35 age group who grew up watching the original '90s series, Mighty Morphin' Power Rangers .
MEFCC 2018: Jason David Frank on 'Power Rangers' for adults
Fox (who will appear on June 4 only), Thompson (who will attend on June 4 and 5) and Lloyd join a select group of celebrities already committed to attend Wizard World Comic Con Philadelphia, including Norman Reedus ("The Walking Dead," Boondock Saints), Sean Patrick Flanery (Boondock Saints, "Dexter"), Billy Martin (Lead Guitarist/Keyboardist - Good Charlotte, Artist - TMNT New Animated Adventures), James Remar ("The Warriors," "Dexter") and Jason David Frank ("Mighty Morphin' Power Rangers"), with many more to be announced.
Great Scott: Three-Time Emmy Winner Christopher Lloyd to Appear at Wizard World Comic Con Philadelphia, June 3-5
Best of all, Jack drew on Hollywood connections forged while writing and producing "Red Scorpion" (a seminal anti-communist feature starting Dolph Lundgren) and had the neighborhood children over to meet the cast of the TV show "Mighty Morphin' Power Rangers." (Abramoff told Roll Call that actor Austin St.
Didn't build Jack
The awful truth, though, is that Harry Potter and the Sorcerer's Stone is little more than a hypertrophied Saturday morning cartoon, with the mawkish mayhem of Scooby Doo and the commercialized feel of an animated spinoff like Mighty Morphin' Power Rangers, Teenage Mutant Ninja Turtles, or other kiddie fare created to market toys and other consumer products.
Rings runs circles around Rowling: Christian in its worldview, Tolkien's lord of the Rings is a literary masterpiece far superior to Rowling's occult-laden, morally ambiguous Harry Potter series. (Cultural Currents)
The mighty morphin' Power Rangers star in a new thumb-numbing adventure for the Game Boy Advance, Power Rangers Time Force.
Mega mirror: Power Rangers
Simon Cowell may have raised a few eyebrows when he signed novelty acts like Teletubbies and Mighty Morphin' Power Rangers, but he struck gold with Il Divo.
It's the divine Il Divo
EMI is rumoured to be in competition with a group of media investors, including children's entertainment entrepreneur Haim Saban, owner of the Mighty Morphin' Power Rangers franchise.
Music talks at advanced stage
It wouldn't be possible without a record $7 million donation from Haim Saban, the TV producer of "Mighty Morphin' Power Rangers" fame.
Hollywood and whine: why are democrats helping the entertainment industry stamp out new technologies that fuel economic growth?
HIT show Mighty Morphin' Power Rangers introduces Dex the Masked Rider in a three-part Easter special.
Riding a winner