A niche in the mosque of any religious Muslim building that indicates the direction of prayer toward Mecca.
Illustrated Dictionary of Architecture Copyright © 2012, 2002, 1998 by The McGraw-Hill Companies, Inc. All rights reserved
The following article is from The Great Soviet Encyclopedia (1979). It might be outdated or ideologically biased.

a prayer niche located in the wall of a mosque facing Mecca. The mihrab may have a semicircular, polyhedral, or, less often, rectangular plan and is topped with a semidome. Ornamentation consists of decorative carvings in stucco, marble, clay, or wood; inlays; frescoes; and decorative semicolumns and arcature bands. Portable mihrabs, mainly of wood, with carved ornamentation, are known. 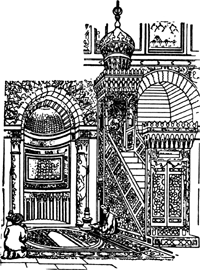 mihrab with the minbar on the right
A niche in the mosque or any religious Muslim building indicating direction of prayer toward Mecca. Focal point of decoration with dome in front.
McGraw-Hill Dictionary of Architecture and Construction. Copyright © 2003 by McGraw-Hill Companies, Inc.

Feedback
Flashcards & Bookmarks ?
Please log in or register to use Flashcards and Bookmarks. You can also log in with
Flashcards ?
My bookmarks ?
+ Add current page to bookmarks
Mentioned in ?
References in periodicals archive ?
When Pergamon's founding director, who had documented the mihrab, learned its pieces were on the market, he collected what he could and reassembled it.
Pergamon, a museum between East and West
Timurid cut-tile mosaic mihrab panel, 14th-15th century, Central Asia or Persia, polychrome fritware, ht 92cm.
Art Market
The Prophet's Mihrab was used first on Friday, last month.
Pilgrims, scholars hail Mihrab shift at Prophet's Mosque
"Locals in Zallaq have taken matters into their own hands after discovering the issue and changed the direction of the carpet in the Shaikh Isa Grand Mosque in Zallaq towards the Qiblah instead of facing the Mihrab, but that's a temporary solution, with major architectural changes necessary."
Worshippers' dilemma
Every mosque has a mihrab, a niche in the wall indicating the direction of Mecca for prayer.
Muslims, minarets and music
Dans le tableau des Doubles garcons, le duo marocain Med Amine Herres-Yassir Kilani a passe un tour comme Med Belcora et Amine Mihrab qui ont battu une paire composee d'Emmanuel Malla de Tanzanie et Med Nedim d'Ethiopie 7/6, (5), 6/3.
Tennis : Le Maroc champion d'Afrique
The artefact, which is unique among British hospitals - a mihrab - is embedded with over 1,000 mosaic tiles, with each tile representing one individual making a heartfelt du'a (a prayer) before painting it.
Cast of hundreds creates stunning artwork for QE
Moreover, an inscription is seen within the Mihrab (dating back to 1657) designed by Haji Shoja Isfahani.
Musalla Siyahoo City and the spatial principles and religious laws governing at its designing
The two-day event falls in line with the implementation of the Caretaker President's initiative on the creation of an institution named "World Mihrab for the Arabic Language."
Marzouki: Arabic language, appropriate challenge to achieve modernity