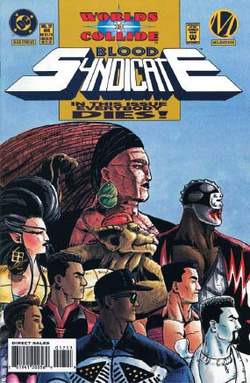 It is common for comics companies to give themselves exalted names, but in the case of Milestone the point was particularly well taken. Debuting in 1993, it was the first comics company established by African Americans and devoted to superheroes of color. Seeking strength—and normalcy—in numbers, Milestone’s founders (writer Dwayne McDuffie, artist Denys Cowan, business writer Derek Dingle and, briefly, Michael Davis, future head of Motown Animation) decided to launch an entire line of super-heroes, rather than a single character, aiming to reflect the range of real life, and not just put one more token “minority” superbeing on the shelves.

This ambitious scope helped guarantee that none of Milestone’s comics would seem to be a gimmick, even as the creators’ perspective helped assure a certain uniqueness, presenting ideas and issues seldom seen in mainstream superhero comics (and hardly ever handled as credibly as Milestone did). Milestone had standards of quality, and a level of freshness and wit, that stood above much else that was produced during an early to mid-1990s glut of new (though not often original) superheroes.

The comics’ setting itself is unusual for the New York-centric norm of superhero stories; Milestone’s tales take place in the fictional Midwestern metropolis of Dakota. Many of Dakota’s superbeings appear after a single catastrophic event, in which a major gang rumble (“The Big Bang”) is broken up by the authorities, using a mysterious gas that kills many and mutates the survivors (and unwitting bystanders) into super-heroes and villains. Milestone’s comics were notable for uncommon touches of realism, and even this fantastic event was no exception.

The best known of these “Bang Babies” was Static (featured in a comic of the same name from 1993 to 1997), a teen who acquires electromagnetic powers and has since starred in the popular Kids WB network cartoon Static Shock, which debuted in 2000 as the first television series with an African American superhero as its lead character. Static’s book was emblematic of Milestone’s realism: a bullied school kid, Static’s alter-ego Virgil Hawkins can’t do much more about it after gaining his powers than he could before, for fear of revealing his superhero identity; his tendency to run off when duty calls costs him even the most menial of occupations (it seems that only white Daily Planet reporters get better job security). This outcast kid has to deal with his own homophobia when a friend comes out; and after Static recognizes a dealer in a drug bust as another close classmate’s boyfriend, he lets him go. (Moral shadings were commonplace for “The Dakota universe,” in this book and no less in The Blood Syndicate [1993-1996], about a team of super-thugs who form a kind of underground United Nations from the fragments of their former gang factions, with no one but each other to turn to.)

Not all Milestone’s heroes were “Bang Babies,” though. Hardware (starring in his own book from 1993 to 1997) was a high-tech armored warrior whose alter ego, Curtis Metcalf, rebels against the white corporate mentor who won’t give the brilliant black inventor credit for his creations. The CEO turns out to be running a criminal enterprise as well as an unethical business, and over the course of the series Hardware finds a balance between his legitimate indignation and his self-sabotaging rage.

Icon (starring in his own book from 1993 to 1997) was the modern superhero name of an alien whose ship crashed in the American South in 1839; seeking to blend in, he takes on the appearance of the earthlings he sees, who happen to be African American slaves. Blessed (or cursed) with a superhuman lifespan, among other strange powers, the alien has assumed the identity of a wealthy conservative lawyer in Dakota by the 1990s, and is convinced to use his powers for justice by an idealistic teen who becomes his sidekick, Rocket. The book intriguingly examined the spectrum of black ideology (from the assimi-lated-in-more-ways-than-one Icon, to the rebellious Rocket, who becomes comics’ first unwed teen mom superhero). There is also a poignant undercurrent of pride in Icon’s selection of a black identity regardless of the consequences.

As Milestone enjoyed an initial flush of success, the line expanded in 1994, with Shadow Cabinet (a creepy secret society of superheroes that anticipates post-September 11 questions of civil rights versus national security), Xombi (a weird and irreverent series about a slain Asian-American scientist reanimated by his own experimental nano-machines), and Kobalt (a somewhat satiric white superhero series).

In its heyday, Milestone introduced some of comics’ most successful and interesting new artists (including Humberto Ramos and John Paul Leon), counted famous fans from Clarence Thomas to Chuck D, and published over 200 comics in four years. The company ran several issues without Comics Code approval, pushing the envelope of edgy subject matter in a way that Milestone’s establishment distribution partner, DC Comics, honored, by carrying every book (and probably growing in the process).

Sadly, a contracting comics market took Milestone with it, and the company’s comic book production ceased by mid-1997. However, the broader Milestone Media operation soldiers on, and hasn’t run out of victories: There has been the Static Shock cartoon (2000-present), a 2001 comic miniseries (again published by Milestone and distributed by DC) to tie in to in, and another interesting Static Shock story (dealing with prejudice against Arab Americans), in volume 2 of the industry-wide benefit compilation 9-11 (DC Comics, 2002). Milestone Media has put out children’s books on African American history makers, and at least one scholarly treatise has been published on the company’s comics (Black Superheroes, Milestone Comics, and Their Fans by Jeffrey A. Brown).

In 2008, DC Comics announced that it was reviving the Milestone superheroes and integrating them into the DC universe. There was a Milestone Forever limited series in 2010, and in September 2011, DC launched a new Static Shock series, drawn by Scott McDaniel and co-written by McDaniel and John Rozum. —AMC

Feedback
Flashcards & Bookmarks ?
Please log in or register to use Flashcards and Bookmarks. You can also log in with
Flashcards ?
My bookmarks ?
+ Add current page to bookmarks
References in periodicals archive ?
In comparison to the typical Image hero, Milestone heroes are much more realistically depicted, both narratively and in portrayal of the muscular male body: Compare the over-inflated body of Image's Prophet [ILLUSTRATION FOR FIGURE 2 OMITTED] with the portrait of a relatively skinny Static, Milestone's electricity-wielding teenaged superhero, on the cover of Static #1 [ILLUSTRATION FOR FIGURE 3 OMITTED].
Comic book masculinity and the new black superhero
Encyclopedia browser ?
Full browser ?
CITE
Site: Follow: Share:
Open / Close