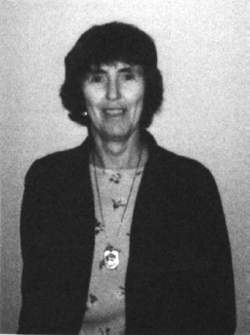 Elizabeth Miller, founder of the Canadian chapter of the Transylvanian Society of Dracula.

Elizabeth Miller, who emerged in the 1990s as one of the most widely hailed Dracula scholars, was born in St. John’s, Newfoundland. She taught in the English Department at Memorial University of Newfoundland for over thirty years. In 1991 she received the University President’s Award for Distinguished Teaching. Upon her retirement, the university named her Professor Emeritus.

With Nicolae Paduraru, Miller co-organized the first World Dracula Congress, held in Romania in 1995, and, along with Jeanne Youngson and J. Gordon Melton, Dracula ‘97: A Centennial Celebration. She founded the Canadian chapter of the Transylvanian Society of Dracula, and at the 1995 World Dracula Conference, held in Romania, she was made a baroness of the House of Dracula.

Since the early 1990s, Miller has become the most productive scholar in the area of Dracula and vampire studies. She has published seven books, including Reflections on Dracula (1997), Dracula: Sense & Nonsense (2000, 2006), A Dracula Handbook (2004) and Bram Stoker‘s Notes for Dracula: A Facsimile Edition (with Robert Eighteen-Bisang, 2008). She is editor of the Journal of Dracula Studies. Dracula: Sense and Nonsense became a watershed volume in Dracula studies by compiling the information from two decades of scholarly research and providing a new plateau from which further scholarly discourse could proceed.

Bram Stoker’s Notes for Dracula: A Facsimile Edition received the Lord Ruthven Award as the best nonfiction title in vampire studies of 2009.

Miller has lectured widely at a variety of venues across North America and Europe. From Vancouver to Bucharest, she has been interviewed for many television documentaries, including ones for National Geographic, the Discovery Channel, PBS, BBC, and ABC’s 20/20. Her expertise is frequently sought for articles on the subject and she has been widely quoted in, among others, The New York Times, U.S. News & World Report, the Chicago Tribune, and The Wall Street Journal.

Miller maintains two authoritative and expansive Dracula websites as well as a blog, all accessible through www.blooferland.com. She currently resides in Toronto.