the technical means used to rescue miners and to clear the scene of an accident and restore normal working conditions in shafts and pits. Mine rescue equipment includes individual antigas and antiheat equipment for mine rescue workers; devices and equipment for giving medical aid to victims of accidents; devices and units for putting out fires in mines and preventing explosions during mine rescue work; instruments for monitoring air composition and the meteorological conditions of the mine atmosphere during accidents; equipment and tools for cutting through a cave-in, for clearing away clayey pulp that has broken through into excavations, and for reinforcing caved-in excavations; and equipment for communication and the providing of information during mine rescue work.

The individual equipment of the mine rescue worker consists basically of isolating oxygen respiration devices (gas masks), gas- and heat-protective devices, and also heat-protection suits. At the beginning of the 1970’s the devices being used in the USSR were the R-12 and the Lugansk-2 with a four-hour supply of oxygen, the RVL-1 auxiliary respirator with a two-hour period of protective action, and the Ural-1 with a three-hour period of protective action. The Komfort respirator using liquid oxygen and the RKh-1 respirator employing chemically bound oxygen have been developed in the USSR. The RKh-1 respirator has a five-hour period of protective action and weighs up to 11 kg. Means for individual antiheat protection of mine rescue workers include the Gateskaf-1 self-contained gas- and heat-protective suit, which permits work for one hour in a zone with a surrounding air temperature up to 100° C, and the semi-self-contained GTK heat-protection suit, which permits a person to remain in a zone with temperatures up to 150° C for 45 minutes. Miners engaged in work underground are provided with self-rescue units in the event that a mine accident makes the air unbreathable. Filtering self-rescue units of types SP and SPP are produced, in which the carbon monoxide present in the air inhaled through the gas mask is rendered harmless by oxidation to carbon dioxide. An essential condition for the filtering type of self-rescue unit to operate efficiently is that the surrounding atmosphere have at least 17 percent oxygen. The ShS-7 isolating self-rescue unit (see Figure 1) has a supply of oxygen in chemically bound form that is adequate for one hour of breathing. This permits a person to be in any dangerous gas environment and breathe normally. 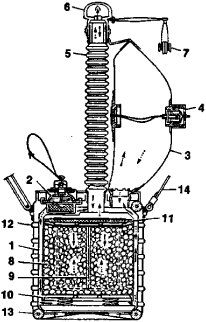 Artificial respiration devices of the Gornospasatel’ type (GS-5 and GS-8) and inhalers of the ILA type are used to give first aid to victims of mine accidents.

In addition to portable pumps for delivering water to centers of fire, high-powered technical means (steam and gas generators, foam generating devices) are employed to put out underground fires and to establish a neutral environment where explosions of combustible gases cannot occur in the sections that are being isolated. Portable instruments (for example, gas analyzers) are used to monitor the composition of the air in the mine during accidents. Mining machinery used under ordinary operating conditions is employed by mine rescue workers to cut through cave-ins, to clear excavations of clayey pulp that has broken through, and to reinforce caved-in excavations. Rescue workers also have special drilling equipment and mechanized means for clearing away large masses of caved-in rock from excavations. High-frequency devices of the Donetsk type are used for direction and communications during mine rescue work. The DET-1 long-range temperature gauge transmits information on temperature in the fire zone over distances of up to 1,500 m. The search for miners trapped by cave-ins is carried on with the help of a recording geophone.

The means of transport of the paramilitary mine rescue units are also included among mine rescue equipment (buses, vans, all-terrain tractors, and special vehicles on which drilling, gasification, and compressor devices are mounted). Airplanes and helicopters are put at the disposal of mine rescue workers for rapid transport to the site of the accident.