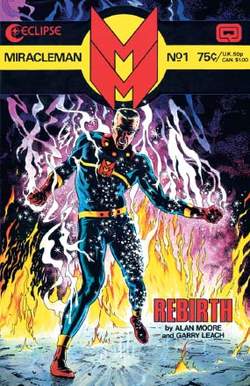 Newspaper reporter Mike Moran dreams of flying children and of exploding spaceships. When he is caught in a hostage situation in real life, Moran sees the backward reflection of the word “atomic,” and it triggers something in his brain. Whispering the word “Kimota,” Moran is transformed into Miracleman, a superstrong, nearly indestructible being. With the return of his long-forgotten alter ego, Moran begins to unravel the memories and secrets of his past, including the fate of Kid Miracleman and Young Miracle-man, his sidekicks in the 1950s, who have similarly disappeared in the years since. But one of them is now a malicious tycoon, with no conscience or scruples, and he’ll stop at nothing— even the destruction of London—to stay on top of the world. And even as Moran explores his past, and fathers a very special daughter, his real life is unraveling around him, and the scientist responsible for his creation has other plans.

In the post-World War II economy in England, the comics business was booming. Publisher Len Miller was doing well reprinting the adventures of American hero Captain Marvel, until 1954, when Fawcett Publications settled with DC Comics and agreed to stop publishing the adventures of the Shazam!-shouting hero. Suddenly left without a main character, Miller instructed comics writer/artist Mick Anglo to create a knock-off of Captain Marvel. Anglo and his studio created Marvelman, whose magic word was “Kimota!” He was accompanied on many of his adventures by Kid Marvelman and Young Marvelman, and often faced the evil genius Emil Gargunza, aliens, and strange thugs. Marvelman became the first true British superhero, and his popularity soared for nine years. But the business changed, and in 1963, the last Marvelman adventure was published.

In 1981, ex-Marvel U.K. editor Dez Skinn was striking out on his own to create a new anthology of creator-owned comics, and he planned to bring Marvelman back. Impressed by a proposal by new writer Alan Moore, Skinn commissioned the first new Marvelman story for Warrior #1 (March 1982). Moore’s story, combined with detailed art by Garry Leach, blew readers’ minds. Moore took the 1950s concept and brought it into the 1980s, posing the question, “What effect would a real superpowered character have on our world?” As Marvelman continued, Alan Davis took over as artist, and the strip became Warrior’s most popular feature. But creative and financial problems behind the scenes—as well as a threatening letter from Marvel Comics when Skinn published a Marvelman Special (1984)—led not only to the end of Marvelman in Warrior, but the eventual closing of the magazine itself. Marvelman had won British comics’ Eagle Awards, and attracted attention in the United States, but it was now out of a home.

Skinn approached U.S. publishers about picking up the Warrior properties, but both DC and Marvel declined Marvelman. Pacific Comics eventually agreed to publish the series, but went bankrupt before it could appear. Pacific’s assets were bought by Eclipse Comics, and Marvelman finally had a publisher again. After a controversial name change to avoid litigation from Marvel Comics, the new Miracleman #1 debuted in August 1985. The series was an immediate critical and sales hit. Issues #1-#6 featured reprints of the Warrior material, but new material—drawn by artist Chuck Beckum (now known as Chuck Austen)—also began appearing in issue #6 (February 1986). As the publishing schedule began to fluctuate, artists Rick Veitch and John Totleben finished the stories for Moore’s run on the series, concluding with Miracleman #16 (December 1989).

Moore’s stories were universally praised, and are often cited as the inspiration for such later series as Watchmen (also by Moore), Marvels, and DC’s Kingdom Come. Despite the acclaim, two Miracleman issues raised retailer concern in the United States. Issue #9 (July 1986) featured explicit scenes of childbirth, resulting in some retailers refusing to carry the book, or placing it in their adult section. The violence of Miracleman #15 (November 1988)—in which Kid Miracleman causes the destruction of half of London and the deaths of more than 10,000 people—was not nearly as boycotted, but comics historians do note it as one of the most violent mainstream comics published to that date. As he left the series, Moore gave his successor a storytelling challenge: Miracleman had now reshaped planet Earth into a utopia, presiding over it as a benevolent supergod.

Hand-picked by Moore, writer Neil Gaiman took to the challenge with relish. He planned three story arcs called “The Golden Age,” “The Silver Age,” and “The Dark Age.” Gaiman’s scripts were interpreted by artist Mark Buckingham, who used a different art style for every story. Issues #17-#22 (June 1990-August 1991) comprised “The Golden Age,” telling stories of the people in the new utopia, and how they viewed or interacted with Miracleman. Two more Miracleman issues were published, and another completed, but #24 (August 1993) was destined to be the final Miracleman from Eclipse; the company closed shop shortly thereafter. In addition to the two dozen Miracleman issues, Eclipse had released five trade paperback collections; the miniseries Miracleman: Apocrypha (which featured out-of-continuity stories by outside writers and artists, 1991-1992); The Miracleman Family (featuring reprints of 1950s Anglo material and released in 1988); and the stand-alone Miracleman 3-D. Miracleman also appeared as a character in the crossover miniseries Total Eclipse (1988–1989).

In April 1996, Image Comics co-creator Todd McFarlane bought Eclipse’s assets, planning to bring back several of the properties, including Miracleman. Unfortunately, the ownership of the rights to the character was in question, with Gaiman and Buckingham owning a portion, and the once Eclipse-owned rights on shaky ground, keeping future Miracleman comic book material in doubt. Despite this, McFarlane featured Mike Moran in cameo scenes in Hellspawn #6-#7 (February-April 2001), and released limited-edition artwork of Miracleman, as well as Miracleman statues.

The legal battle between Gaiman and McFarlane over the rights to Miracleman ended in a stunning surprise. It turned out that Dez Skinn had never actually purchased the rights to Marvelman from his creator Mick Anglo, who sold them to Marvel Comics in 2009. Marvel changed the character’s name from Miracleman back to Marvelman, and published reprints of many of his 1950s stories in 2010. It remains to be seen what further plans Marvel has for Marvelman/Miracleman. At this point it is unknown whether the Moore and Gaiman Miracle-man stories will ever return to print, or whether Gaiman will get to complete his unfinished Miracleman saga. —AM & PS